What is a London CIV Ticket?

A CIV ticket is a ticket sold under the CIV conditions (Conditions Internationale de Voyageurs) for cross border rail travel. In the case of London, this means that, in the outward direction, if the UK train arrives into London late, Eurostar must honour the ticket and place the passenger on the next available Eurostar train. In the homeward direction, should the Eurostar arrive into London late and the connection onto the booked onward UK train is missed, the UK operator must accept the ticket on their next service. CIV tickets also include the underground connection to St Pancras where needed. They are normally slightly more expensive than the advance fare to / from London at the time of booking, but significantly cheaper than an open ticket. For more info see the Loco2 website.

All UK operators are required under their licence to accept / honour CIV tickets as the UK government is a signatory to the agreement (which is separate to the EU and will continue after Brexit). There is no suggestion that UK TOCs do not honour such tickets, and anecdotal evidence is that both UK TOCs and Eurostar are currently going beyond the letter of the law at present in accepting passengers for onward travel when disruption has occurred. Nevertheless, passengers want the certainty of knowing they are protected.

London CIV tickets are only valid when part of an international journey and revenue protection staff are entitled to ask passengers showing such tickets on board a UK train to provide evidence of the Eurostar connection ticket as well (either the actual ticket or booking reference for ticket collection). Without such evidence, the London CIV ticket is not valid.

CIV applies not just to London but any international rail or rail and sail journey including tickets to the Republic of Ireland (where purchasing through tickets doesn’t seem to be a problem), also for journeys via Ashford and for some East Coast ports with rail and sail facilities to Europe, and of course cross-border journeys in Europe (example below). However, this page is confined to the London case. 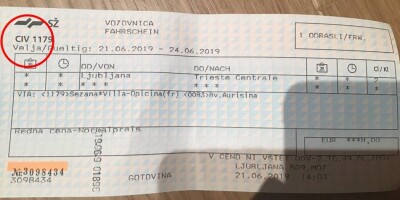 Why Do Passengers Need To Buy London CIV Tickets?

A passenger travelling from say Newcastle to Paris can easily buy a through ticket from Eurostar or Voyages-SNCF which is automatically sold under the CIV conditions. There are however several instances in which through tickets cannot be purchased, and in these cases the passenger must buy their ticket for the UK leg separately, and would wish to buy their ticket under CIV conditions to ensure protection in the case of disruption to their journey. Such cases include:

CIV is specifically concerned with the carriage of passengers, including their luggage, vehicles, etc.. There are six other appendices. These deal separately with topics like the carriage of merchandise (CIM) or the use of infrastructure (CUI). As international law it takes precedence over domestic (including EU) law for at least all those countries who are signatories to the Vienna Convention on the Law of Treaties. which includes the UK. (Article 27 is of particular importance in this respect: "A party may not invoke the provisions of its internal law as justification for its failure to perform a treaty.")

For our purposes, Article 32 of CIV is the key. This reads:

The first three sections of Article 1 define much of the scope of the law:

Because CIV is an international, not an EU, agreement which all signatory governments are obliged to honour, it will not lapse after Brexit. In the UK, its obligations are written in to the operating licence of all TOCs (both franchised and open access). Specifically TOCs are required to:

How can CIV be improved?

London CIV tickets can be bought at booking offices and at specialist 3rd party websites. Booking offices will check that you hold a valid Eurostar ticket, whilst websites will warn that the ticket is only valid as part of an onward journey with Eurostar.

Railfuture considers that it should be possible to buy such tickets through the TOCs’ online channels, which will help promote travel to Europe by rail, including the UK domestic leg: