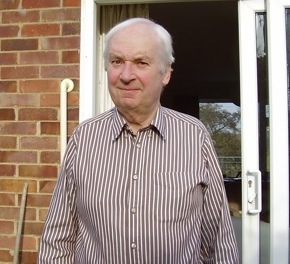 Peter was born in Waltham Cross, Hertfordshire but moved to Norwich in 1970.

Following concerns over the future of the Norwich to Cambridge rail route which was being considered for closure, he saw a letter in the Eastern Daily press in 1972 publicising the Railway Invigoration Society.

Peter went to the meeting and subsequently joined. He joined the East Anglian committee and has been a member ever since, despite two attempts to take a back seat. He was branch chairman and vice chairman on two ocasions and served a spell as branch secretary.

Joined the Railway Development Society national executive in the 1980s, becoming national chairman in 2000 and president in 2004. He decided to step down as president in 2012 on reaching 75 years old.He became a vice president.

Peter was the national RDS media and local spokesperson for a number of years. One year, he did 37 interviews. Peter also started a national email newsletter entitled Railway Cuttings from May 2001 to July 2002 which ran to 47 editions. He also co-operated with the Office of the Rail Regulator and the Rail Passenger Council in the publication of the Directory of Rail User Groups. He was its editor for three editions 1997, 1998 and 2002.

Peter was also a director of Transport 2000 and a member since 1974 of the Mid Norfolk Railway Preservation Trust and previous organisations, and a member of Peterborough-Ely-Norwich Rail Users Group.

Peter never worked in the rail industry but he has maintained a sustained interest in London Transport 1933 to 1963 and in British Railways East Anglian history.