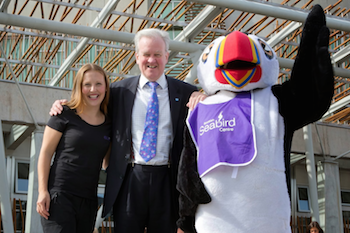 Stewart Stevenson with Scottish Teacher of the Year Jenny McAllister at the Scottish Seabird Centre
Mr Stevenson was born in 1946 in Cupar, Fife. He studied mathematics at the University of Aberdeen, graduating 1969.

In 1999, he retired from Bank of Scotland as a technology director and was elected to the Scottish Parliament in 2001 as member for Banff & Buchan. He first joined the SNP in 1961.

He now represents the new constituency of Banffshire & Buchan Coast in the Scottish Parliament.