Railfuture campaigns for a bigger and better railway in Britain. That includes the UK’s only rail link to the European mainland, which runs through the Channel Tunnel. At the moment the passenger service is run exclusively by Eurostar although that may change in the future. Disappointingly Deutsche Bahn’s plans for a rival service have been put on hold, which means that Eurostar does not face a direct competitor to encourage it to improve its service.

Railfuture has, to date, done three surveys of Eurostar travellers.  In the last one, which was published in September 2015 (read 'Eurostar snapshot survey'article and Press Release about the survey), many respondents described the then 21-year-old trains as “tired and tatty.” Although many of the criticisms and wishes for an expanded and better-connected service are unlikely to be met in the near future at least the train interiors were going to improve thanks to a refurbishment programme for the old TMST trains (which will then be called ‘e300’ when refurbished) and introduction of brand new ‘e320’ trains. The train model names are based on the maximum speed in kilometres, with the new trains capable of going 20km/h faster.

Eurostar’s investment in new trains was partly driven by the ending in 2010 of its exclusive right to operate passenger trains in the Channel Tunnel and Deutsche Bahn’s (DB) then plans to operate a rival service. The superiority of DB’s planned trains meant that Eurostar had to rise to the challenge.

Eurostar’s London-Paris market is stronger than London-Brussels, and the former has more business travellers. Unsurprisingly it runs its new trains, which have up to 200 more seats (950 versus 750) only on the Pairs route initially. Eurostar does not announce which trains will be operated by an e320 but they tend to be the ones with the most business travellers and there is a trick to finding out (see the Man at Seat 61 website).

Railfuture Director Jerry Alderson, who used the older trains many times, travelled on the new trains in August 2016 – both the outward and return trains arrived on time - and he gives his review below.

The e320s look modern and sleek but before even boarding the train there was disappointment. The outside was filthy and had left the depot like that (it was the early morning and the train’s first trip that day). 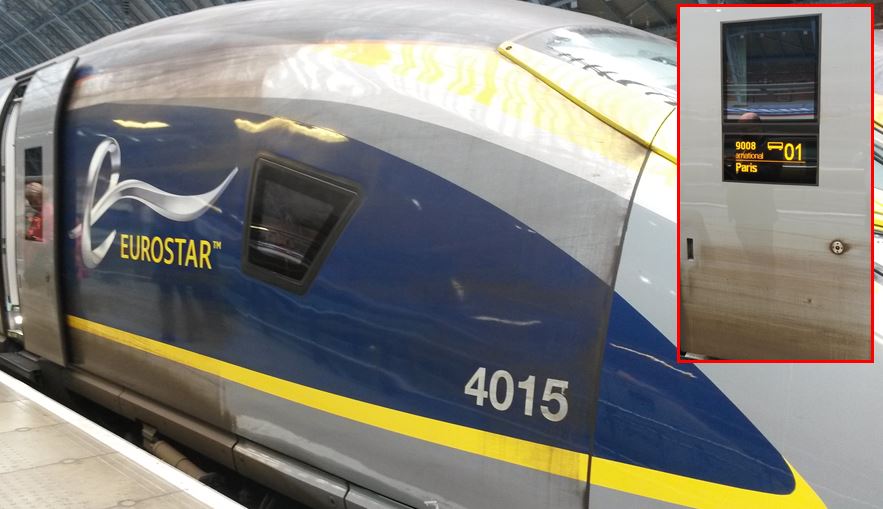 The second negative was the high steps to all of the carriage doors, even the carriage marked with the wheelchair sign on the doorway. This means that persons of reduced mobility (PRM), not just wheelchair users, would require assistance to board and alight. Most travellers will have luggage as well. Unlike most train services it will not result in increased dwell times as Eurostar has long stops but passengers can feel uncomfortable when staff have to provide a ramp just for them.

Given that all trains in Britain must be accessible from January 2020 (a tighter deadline than in other European countries) it’s hard to imagine any new British train having such high steps. In fairness, the Eurostar trains have to cope with low platforms that are common in mainland Europe. 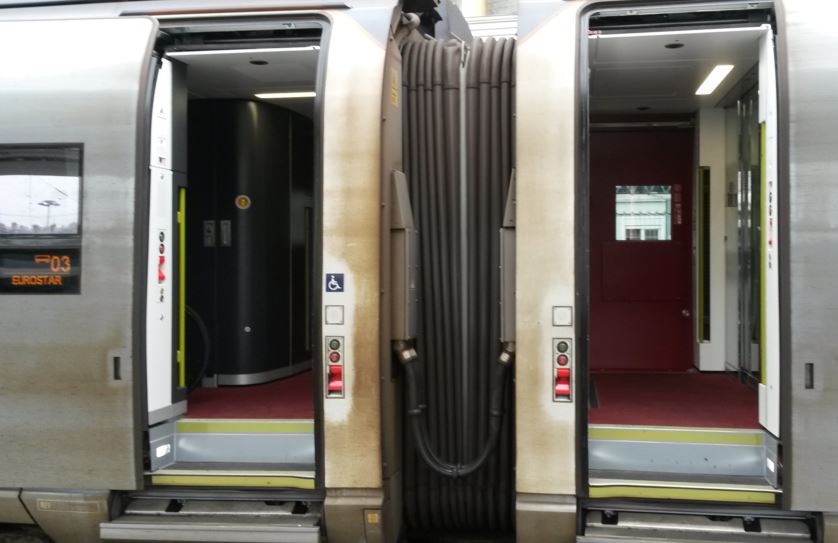 Walking into a Standard Premier Class carriage (the intermediate class between Standard and Business) immediately shows how much more relaxing that a high-speed train is compared to flying.

The two-plus-one seating is spacious. It’s worth remembering that the new trains have been designed for the wider loading gauge available on the HS1 line rather than the restricted width on the rest of the British rail network that the old trains had to fit within. 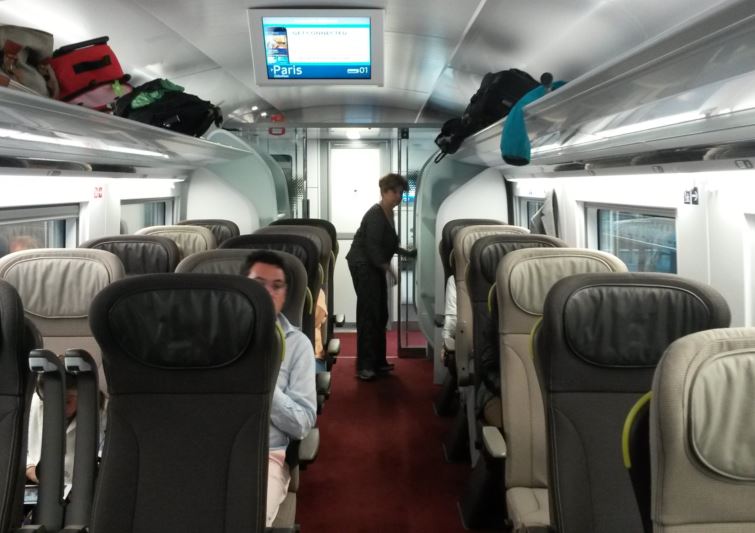 The single seats give lone travellers more privacy with a chance to travel undisturbed. 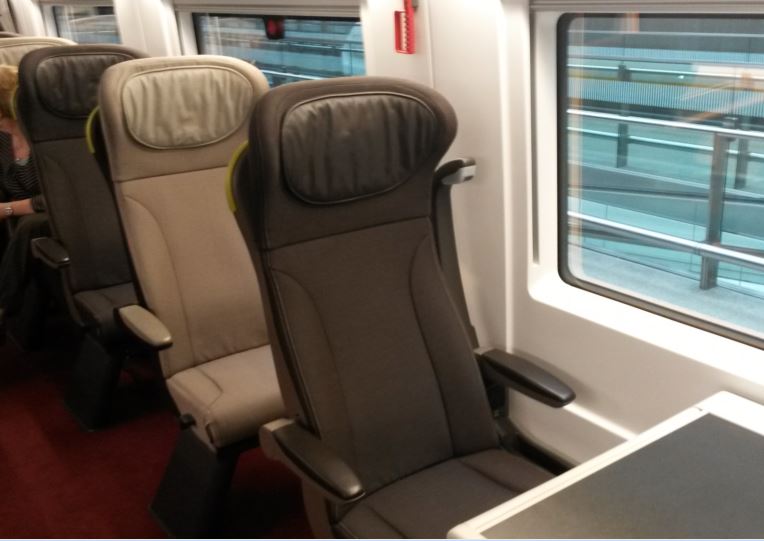 Like many trains with airline-style seating, the seats face towards the centre of the carriage so that there’s a 50% chance of facing the direction of travel. Unsurprisingly those seats tend to be booked first. Like airlines, the Eurostar website allocates a seat that you can then change.

Standard class has two-plus-two seating. However, the wider carriage width means passengers have more space than before. 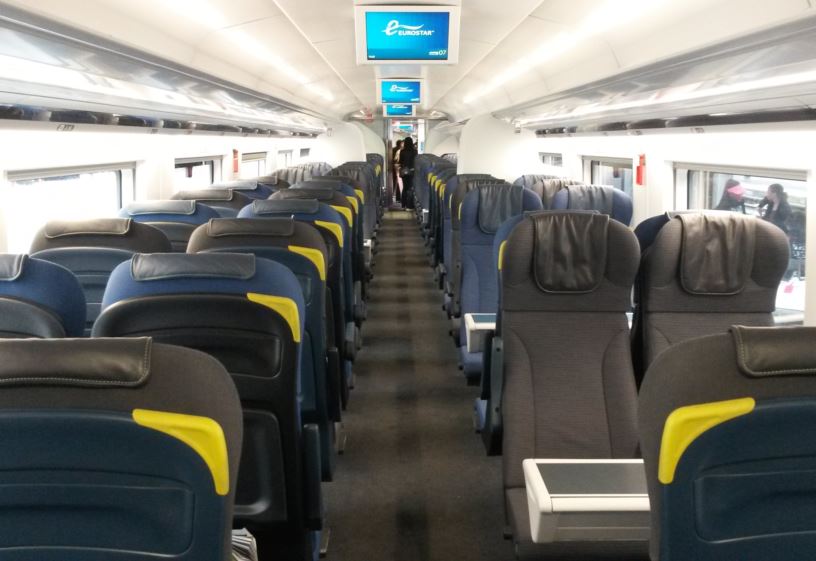 The double seats around tables are not appreciably different between the Standard and Standard Premier Class carriages. The latter, shown below, has padded headrests rather than antimacassars hanging over the chair. 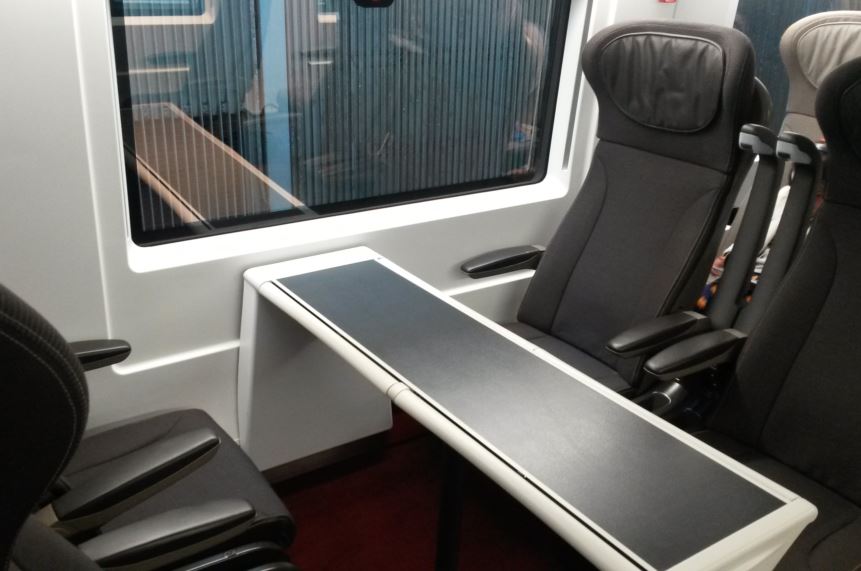 The extendable tables are same in both classes but the e320 trains have a completely different type of table. The extension is pulled out of the triangular base of the table. It is better than the ones on the TMST trains as the table is fully usable without opening out the extension.

The new trains retain pull-down blinds, which are particularly useful when the sun is low in the early evening. 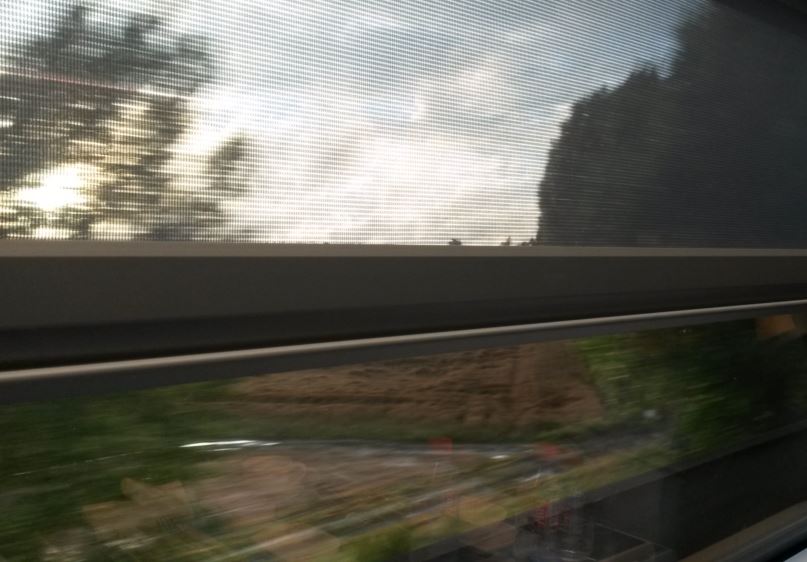 One nice feature in Standard Premier Class was the availability of cushions (or pillows?) from the centre of the carriage adjacent to the large litter bin. The e300s had small personal litter bins but these were later removed because of the effort of emptying them – something that doesn’t bother other European operators. 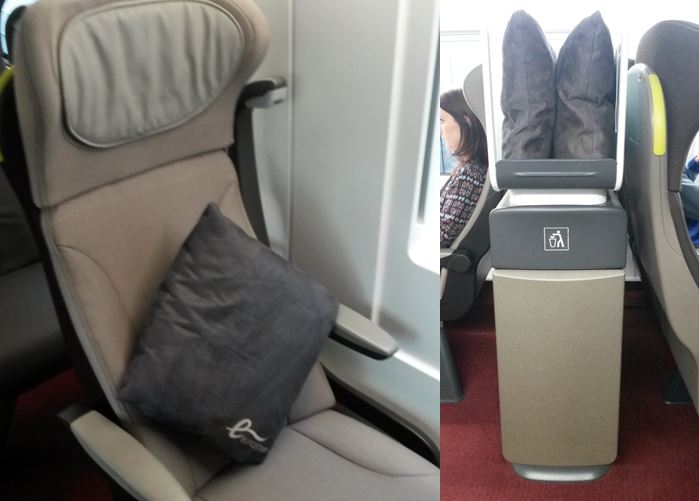 The connecting doors are much better than on the e300s. They look modern and open automatically rather than a handle to pull. The trains also has luggage racks that are visible from the seating racks. Many people are reluctant to leave luggage in the vestibule in case it is stolen at intermediate stops. 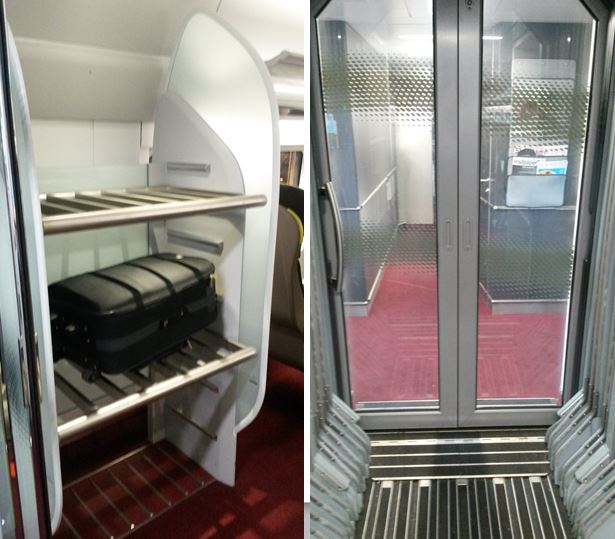 The toilets are more welcoming than the ones on the e300s. Washbasins are operated using a tap not by the antiquated pressing of a button on the floor, which some travellers were unaware how to use. 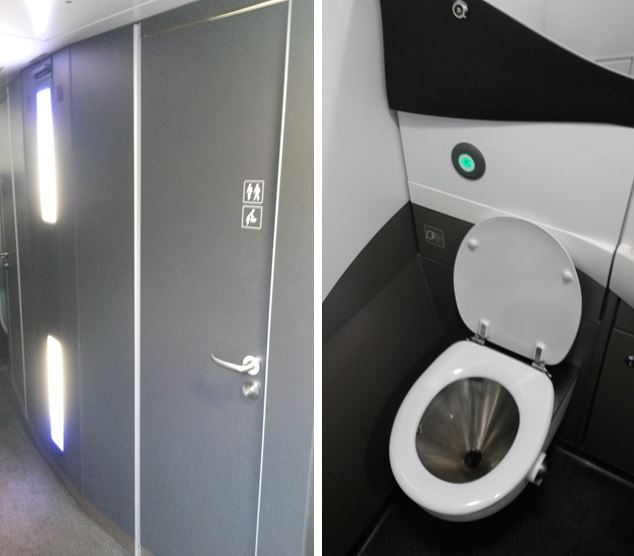 Like the e300s the power-points provided alternate between UK and Continental sockets. Whether or not the Eurostar website allocates seats based on whether the booking is made for the UK or not is unclear. However, on the e320s rather than being on the wall they are hidden underneath the arm rests and their location is not obvious. The new trains also provide USB sockets (shown below the UK socket in the photo below), which passengers are more likely to want to use these days. 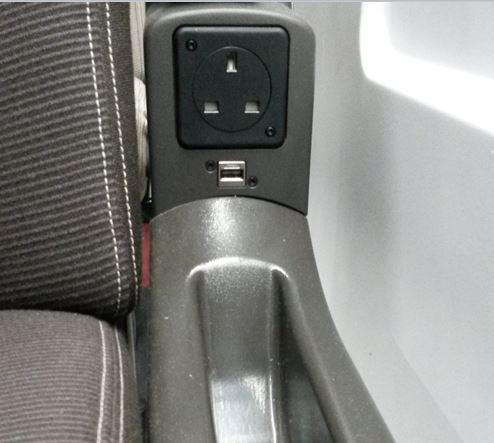 The new trains have slightly higher ceilings (possible because of the more generous loading gauge the trains now run on). The overhead luggage racks are also wider and stronger. Surprisingly the e300’s lower shelves for small items such as an umbrella do not exist. 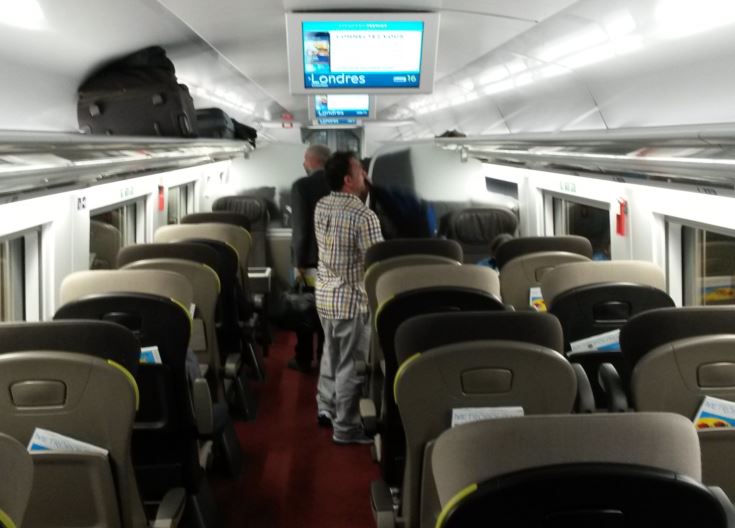 As can be seen from the above photograph, like many modern inter-city trains there are information displays throughout the carriage (and they are also provided on the wall in the vestibules). Other operators have retrofitted them on older trains. It was a disappointment there were none on Eurostar's older trains.

Unfortunately the range of information shown was very limited indeed (especially to regular travellers who will know when they are approaching their destination) and the content was static. All of it was bi-lingual. Unlike many modern high-quality train information screens it did not show the time (particularly useful on a journey that crosses time zones, surely?), the current speed (hitting the maximum is an advert for high-speed rail) or a map giving the train’s location. It did display the carriage number, though. 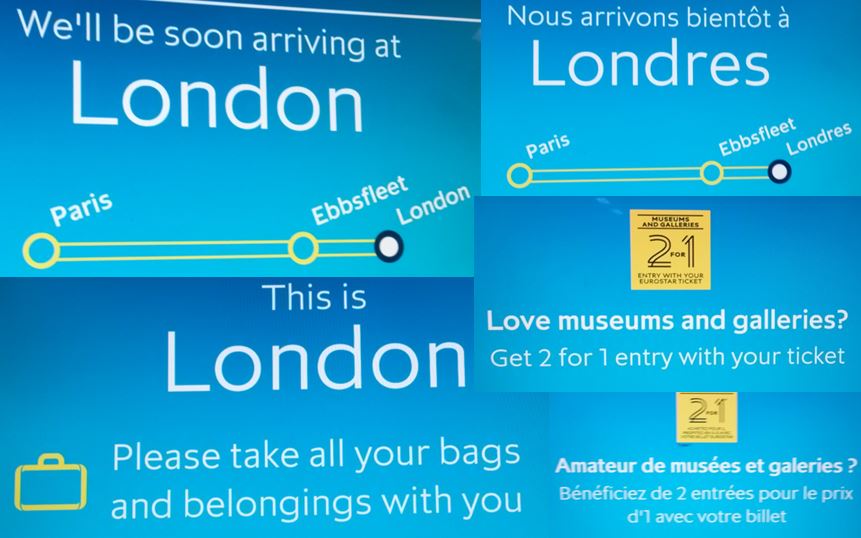 The screens also advertised the in-train video entertainment, which could be watched on a tablet or laptop. Although making use of Wi-Fi to receive the programmes and films they were originated through digital recordings on the train rather than the internet and therefore should not be susceptible to interruption. 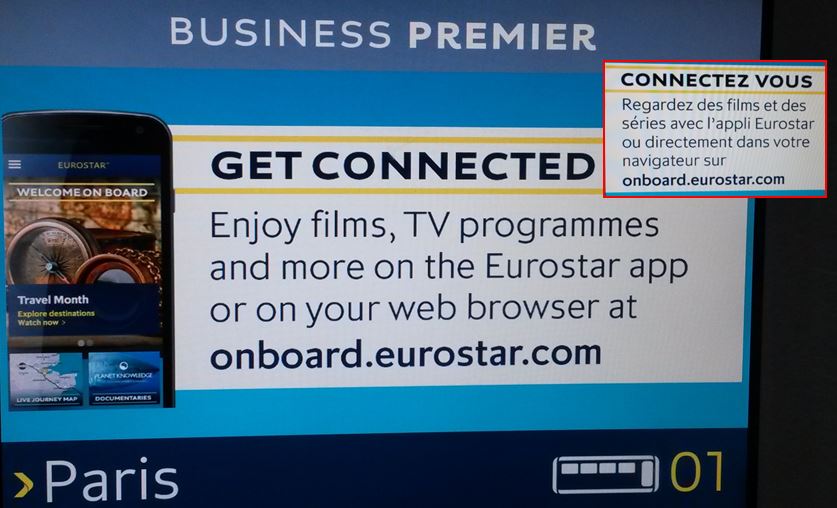 One of the main service improvements introduced on the new trains is Wi-Fi. These help to make up for the lacklustre range of travel information on the screens. Although it was easy to connect to (there was even an illustration on the screen of how to do so – in red box below) the signal was not continuously available (as shown by the screenshot below). 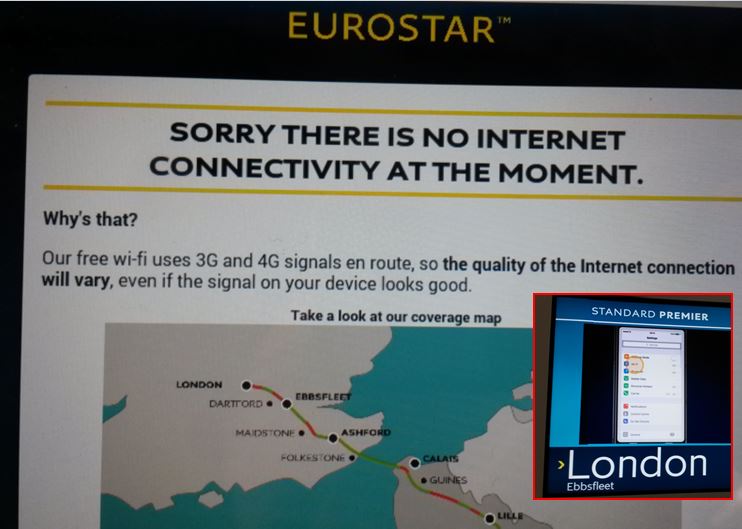 The buffet, which is available to Standard class passengers, isn’t mentioned in this article.  The intermediate Standard Premier class cost around £100 each way (which may only be a little more than a Standard Class seat on the same train – and occasionally cheaper! See Eurostar Fare Madness) offers a light meal.

The meals have definitely deteriorated in recent years. Once hot meals were served but now it is entirely cold, apart from the tea or coffee. The starter for dinner has also been dropped. The photo below shows breakfast and dinner respectively. 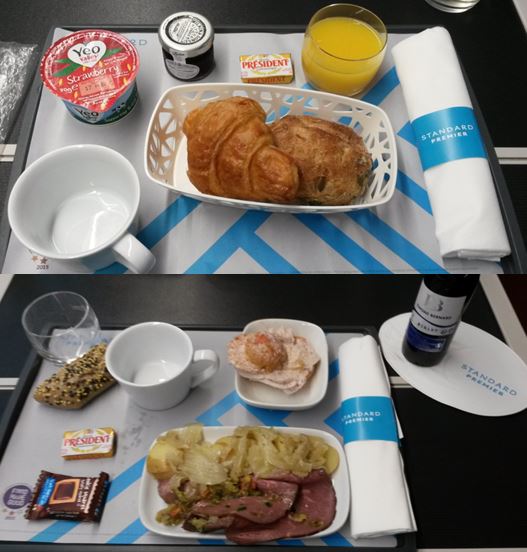 The old trains were articulated (two carriages shared the same bogie) and had to be shorter to get round bends on the British rail network. The German-built e320s are not articulated and do not run on routes with tight curves, so the carriages are longer. This means there are only 16 rather than 18, which is easier to crew. Had there been only one door per carriage, like the TMST/e300, it would have caused longer station stops, but the e320 carriage has two doors so passengers can board and alight faster.

There’s one lesson that needs to be learned. When new trains at introduced at stations it may be necessary to change the signage, which shows only the layout for TMST/e300 trains. 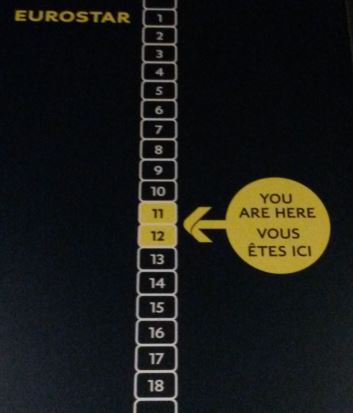 As one would expect, the new trains are definitely superior to the TMST trains, which will hopefully be partly brought up to a similar standard as part of the refurbishment. The old trains were behind the times in almost every respect but the new ones are close to the best one can find elsewhere.

So, is there much that Railfuture would ask Eurostar to change?

Given that the basic structure of the trains cannot change it’s the ‘soft’ elements of the journey experience that should be improved. The information screens could be a lot more useful, especially with real-time connection information, and the Wi-Fi should be permanently available, although that may require lineside infrastructure upgrades. Discrete notices explaining where the power sockets were located would be helpful. As for the on-board experience, given the price difference, slightly more substantial complimentary catering would give the impression of value for money.

Railfuture is run entirely by volunteers and funded by its many members (click Join). It campaigns to improve the passenger experience on Britain’s railway and is particularly interested in accessibility along with innovative ideas that can be copied. Feedback can be e-mailed to feedback at railfuture.org.uk
Read some of the previous articles by this writer: Carlisle Sets Example, Day Ranger Day Out,  Railfuture Gives Evidence,  Prague Compared,  Hopping to Catch a Train, 20 Years Going in Circles, Mountain of Ideas, Sent to Coventry,  Fare Rises - RPI vs CPI,  New Year, Better Railway, Tube Usage Hits Record,  Passenger Growth Future?,  Passenger Priorities , Accessible Travel, Eurostar Snapshot Survey,  Stansted Experience, Widening the NET, Cheapest fares by law?, Bring Back BR?, Public Sector Franchises, Fare Increase Viewpoint and Tube Staffing.