Railfuture notes that TfN's proposals, now updated to include the use of HS2 tracks between Manchester Piccadilly and somewhere west of Manchester Airport (around High Legh) where the route diverges, still lack detail.

We look at the possibilities below with reference to those details known. The screenshot of Google MyMaps below shows the two existing main routes (Chat Moss and CLC), with what we guess is the route of the proposed NPR route from the published information. Although Liverpool City Region authority have started a Station Commission to look at possibilities for new station locations in Liverpool, for the purposes of estimating journey times, it is assumed this won’t be too far from Lime Street so is likely to be very close.

The fastest journey times on two existing main Liverpool to Manchester routes are 35 mins for the route via Chat Moss to Victoria, and 50 mins for that via Warrington (CLC) to Piccadilly.

NPR aims to cut the journey time to 26 minutes but doesn’t have much detail, except the mention of an “upgrade Fiddlers Ferry” route, so looking at the map, using this “estimated” route, we arrive at figures for the total route mileage for each route as below, so to achieve the journey times, trains would need to run at 95 mph non-stop on that route, adding stops at Manchester Airport and Warrington (say 2 mins each), would make it 113 mph end to end, but this assumes you can travel at 113 for the entire route, so as there are no doubt lower line speed limits between Widnes and Liverpool (around 20km - 12 miles), it would be safe to assume trains would need to run at an absolute minimum of 125 mph on this route.

For the NPR route, the above pathing in orange takes the suggested route between Warrington and Liverpool and assumes a new route east of Latchford (near Warrington) to join the “existing” HS2 line near High Legh in Cheshire.

The current (Fiddlers Ferry) freight line from Warrington Bank Quay low level is a bit circuitous for a while so it may need some upgrading to speed it up and the route from Widnes on to Liverpool is also quite congested so also may require re-signalling to accommodate speed increases, especially as it gets closer to Liverpool.

The part of the line between Allerton West Junction (just north of Liverpool South Parkway) and Edge Hill is quite crowded with up to 11 tph off peak (both directions) presently, but there could be a bonus in getting direct traffic to Manchester Airport avoiding central Manchester, which would then help with capacity on both the Chat Moss and CLC (via Warrington Central) routes. There are 12 tph at Bootle Branch Junction on the Chat Moss route, including freight which obviously adds the total. Clearly some of this traffic would be taken away if there were NPR trains, but the pinch point is the approach to Liverpool; west of Edge Hill its four tracks for all trains into Lime Street and is probably at maximum capacity, which adds to the issue about terminal capacity in Liverpool and Railfuture thinks that the case for new terminal capacity is made if both NPR and HS2 are added into the mix, i.e. that Lime Street could not be expected to cope with both.

Liverpool is a heavily built-up city so it would not be easy to make space for a new terminal and it can't escape the attention of residents that one solution being looked at in Manchester is to tunnel in and build new platforms, so why not in Liverpool (e.g., make some new low-level platforms at Lime Street with new tunnels)?

Another option could be the revival of the former Park Lane/Wapping Goods station as a new HS2 and/or NPR station, this was located between St James Street and Wapping close to the waterfront. Wapping tunnel that took trains from Edge Hill to here is still there, (there is some evidence of tracks still in the corner of Crown Street Park also), the tunnel exits are circled on red while the outline of the old station is in yellow on the screengrab of Google satellite view below. 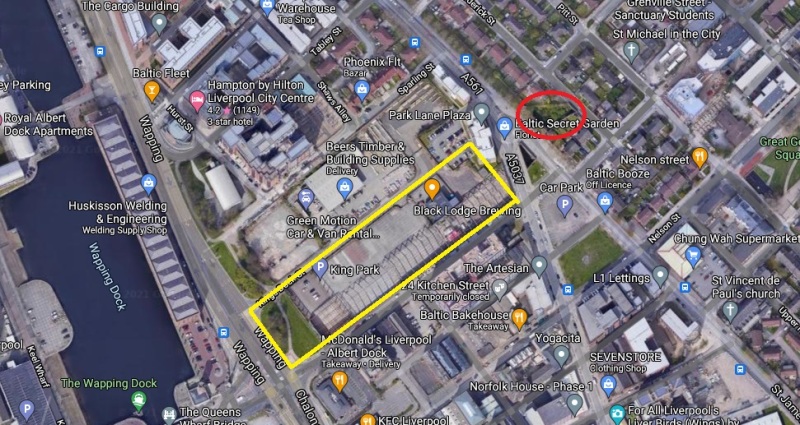 This area has been relatively undeveloped since closure in 1965, the only limitation seems to be site length, its barely 200m in total above the surface and about 290m to the tunnel entrance, though a block of flats has been built right across the tunnel into the site, so it may be that the piles for this go right through the tunnel which would preclude its use without demolition of some form of reinforcement.

It can be seen there are complex interactions in all of this, but in essence Railfuture considers that the key NPR aim of 26 minutes Liverpool to Manchester can't be delivered without significant new infrastructure in Liverpool.