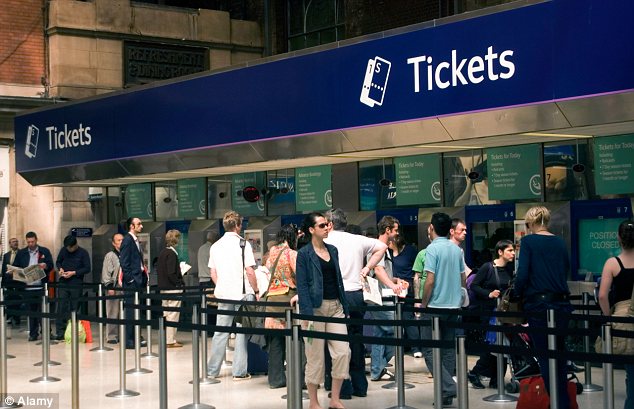 Neil Middleton, a Railfuture Director takes a look at expected Station Ticket Office closures and wonders if, looked at through wider viewpoints such as timing (vs fare simplification), inclusivity, attracting new passengers to rail they are necessarily a wise move. Pic: This is Money.

So, went to the Accelerate: Rail 2022 conference last week, which got me musing about the expected rail ticket office closures (see, eg, the BBC).

GBR speakers at the Conference emphasised the importance of getting the 50% of the UK population that never travels by train to start using the railway and also about how it needed to be an inclusive railway.  And I thought to myself “Ticket Office closures”, “Left Hand” & “Right Hand” – “are they talking to one another?” – “quite possibly not…”.

My train of thought was about role of the ticket office in choosing and purchasing the right ticket at this moment in time.  If the railway wants to attract the new to the railway passenger and be as inclusive as possible, then the purchase from a person choice continues to be an important one.  We have a hideously complex ticketing system on the railway with enormous variability in price – as I type this, an adult Londoner wanting to go to Manchester (and back) this weekend could pay prices between £64.70 and £510.  And, whilst many of us are happy – or even prefer – buying online, that isn’t always isn’t true, and there are some aspects of inclusivity that fail the “online is easy” and “Ticket Vending Machines (TVMs) are easy” – they include many (but definitely not all) elderly, those with dexterity challenges (who hasn’t struggled with a TVM where the touch screen is seemingly uninterested in our finger presses, or a message disappears below the bottom of the screen) and those of us who either do not possess a bank card, or don’t have the funds available (and many TVMs are card only).

Yes, we know that digital channels are a growth area, and very much on the positive side of that, Oliver Owens from GWR made the point at the conference about how GWR had effectively sped up the London to Reading Journey on Friday evenings by 5 minutes – not by infrastructure investment, nor by running the trains faster – but simply because a lot fewer people needed to either go to the Ticket Office to buy, or to a TVM, to collect their ticket (5 years ago, the Friday evening queues were a nightmare).

The individual behind a ticket office window currently has a number of unique characteristics:


There’s no point in being a King Canute – believing that the ticket office window needs to continue, locations and hours unchanged in perpetuity – that is neither sensible nor realistic – almost irrespective of the cost pressures the UK railway faces – reduced demand (as a portion of sales) makes change sensible. And nor is this an objection to Digital first – it is about not being “Digital only” and linked exclusion concerns.


So to sum up: take a narrow perspective and ticket office closures and reduced hours get appealing – plenty of alternative purchase channels, and costs to be saved.  Take a wider view and focus on revenue implications and quite possibly there is a case for a slower, and delayed ramp down – and for keeping all the staff at the station – above all, let’s have a business case for ticket offices that both takes the widest view and sets out how ticket office changes are to be interlinked with wider changes such as the new GBR website.