Our aim is a bigger and better railway that people are proud and pleased to use and recommend.

Railfuture campaigns nationally and locally for: 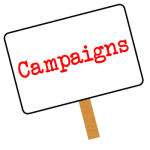 Railfuture's fares campaign has notched up success with the recognition by Chris Grayling that fares could rise in line with the lower CPI not RPI. Railfuture campaigns have helped to open more than 400 new stations and over 950 km of new routes since 1960, supporting economic growth and providing new journey opportunities to passengers.

Railfuture challenges government and the rail industry to rebuild trust by fulfilling ten customer demands in 2019.

Our opinion is often sought by press and media, see Railfuture in the news

Railfuture's official policy is determined by the Board of directors, who are influenced by Railfuture activists and the membership.

Railfuture has produced a number of policy statements to guide our campaigning for a bigger and better railway. They will be individually revised when required and are available to Railfuture members, the rail industry, stakeholders and the general public.

Railfuture keeps in touch with important transport issues nationally and locally, through our branches and affiliated rail user groups. We take every opportunity to develop a relationship with national and local politicians and government officials and brief on national rail issues: