No longer a Cinderella line backwater 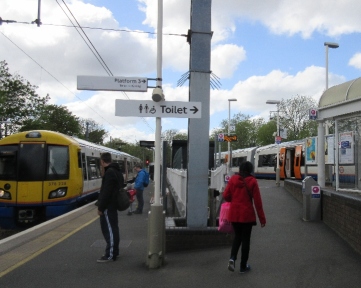 For many years prior to Transport for London taking over the line in November 2007 as part of the new London Overground, the Gospel Oak-Barking line (GOBLIN) was one of London’s forgotten railways, neglected and unreliable. Its trains were among the oldest on the network and were often lightly used as a consequence. Its unstaffed stations also made it a route to be avoided, given a choice. Almost perversely, despite those deterrents, ridership in the latter days of Silverlink Metro continued to rise and some additional services, using the class 150 DMUs, were introduced.

The past decade with London Overground operation has seen major investment and resulting changes, including new class 172 2-car Turbostar trains with better reliability and improved frequencies following resignalling, and improved staffed stations. This has led to a very significant further upturn in passenger numbers, such that Arriva Rail London Ltd, like their predecessor London Overground Rail Operations Ltd (LOROL), are using every available diesel train they have to the maximum possible extent ahead of platform lengthening for new 4-car trains and electrification of the line. The extra route capacity from resignalling has also meant that more freight trains are being routed over the line.

The line has increasingly become a victim of its own success. Services are operated at 15-minute intervals by two-coach diesel multiple units. The inexorable growth in passenger numbers means that during peak periods trains are heavily overloaded, with passengers often being left on the platform. ARL run some extra 'PIXC-buster' trains using their maintenance spare stock, but otherwise capacity is constrained; there are no spare paths to run extra trains, no suitable rolling stock available to lengthen the diesel trains, and platforms at some stations (particularly South Tottenham) have until recently been too short to accommodate longer trains. This will be finally resolved when the line is electrified and 4-coach electric trains are available in early-2018.
STOP PRESS: On Wednesday 7 February 2018 Network Rail confirmed works to increase the clearance through the bridge by Crouch Hill station. See more details.

New 4-car electric trains are expected to be in full service from the 20 May 2018 timetable.

Gospel Oak-Barking line will be extended eastwards, to Barking Riverside

The Barking Riverside Extension will take GOBLIN services further east in 2021 to support a new 10,800-home development at Barking Riverside.
STOP PRESS: On 4 August 2017 the Secretary of State for Transport approved TfL's application for a Transport & Works Act Order and deemed planning permission to construct and operate the extended line to Barking Riverside. On 8 August the Mayor of London and TfL welcomed the news, as it marked the conclusion of a three-year process of consultations, and followed a Public Inquiry in October 2016 to which a letter of support from Railfuture for TfL's application had been submitted.

The process began formally with a September/October 2014 public consultation, which was reported to command overwhelming support in January 2015. Further public consultation then took place in May/June 2015 on alternative route alignments. The Mayor of London then asked TfL to seek powers for construction in March 2016, and in May/June a statutory consultation took place on TfL's application to the Transport Secretary for a Transport and Works Acts Order. In August 2016 TfL began to procure a contractor, which was followed by the short-list announcement in December 2016. Then came the Secretary of State's decision on 4 August 2017 granting conditional approval to TfL's application for a Transport and Works Order, which was welcomed by the Mayor of London and TfL on 8 August.

Gospel Oak-Barking line has had its station platforms extended for new and longer, 4-car, electric trains, and is being electrified

This short briefing restates the case for electrifying this crucial missing link.

The Gospel Oak to Barking Line (GOBLIN) has been a 21st century anomaly among London’s railways. It is a 12-mile un-electrified rail route linked to electrified lines at each end, and with other key routes in between. Along the route it links to five more electrified lines: the Thameslink/Midland main line (west of Holloway Road), the East Coast main line (west of Harringay Green Lanes), the Enfield Town and Southbury Loop lines via Seven Sisters (west of South Tottenham), the Lea Valley line between Stratford and Tottenham Hale (east of South Tottenham), and the Great Eastern main line (west of Woodgrange Park).
Since the line is not electrified, it can only be operated by diesel trains; electric trains (whether passenger or freight) from other routes cannot use it. Electric-hauled freight has to use the North London Line, and pass through very busy junctions at Camden Road and, more importantly, Stratford and Forest Gate, where freight trains can delay passenger services.

Benefits for passengers and train operations

Electric trains have better acceleration and an Overground fleet of 4-car electric trains would be able to carry many more passengers, relieving overcrowding. All-electric extensions of the service at each end of the route, which TfL wants to run, become possible, such as to Barking Riverside in the east and/or to Willesden Junction/Clapham Junction (even Ealing?) to the west. Some other works would be needed, such as new platforms at Gospel Oak on the through lines there.

Thirty container trains a day are expected eventually from London Gateway/Thameshaven, on the Essex Thameside route, which is currently being expanded. Most will go to the West Coast main line but without electrification of the Gospel Oak-Barking line electrically-hauled freight trains will add further pressure on the Great Eastern main line and the North London Line.

Electrifying Gospel Oak-Barking and its connections will give rail operators greater flexibility for maintaining services during disruptions and engineering work. It will also provide an important alternative route for electric container trains from Tilbury and London Gateway, and any traffic that comes from the Channel Tunnel high-speed line at Ripple Lane Barking.
Electric passenger and freight services between Stratford and Gospel Oak could be diverted through Temple Mills and South Tottenham, away from the North London Line. During weekend engineering works, or even during an extended blockade of the Camden Road to Stratford section, some North London Line trains could also operate this way to Stratford.

Links to two other electrified lines were also due to be electrified. These are to Carlton Road Junction on the Thameslink/Midland main line, and the Harringay Park curve to Ferme Park providing a vital link to the East Coast main line; only the latter is in the current 2016-18 scope of works.

Electric trains are cleaner and quieter than diesels, and will fit in with TfL’s aim of promoting the Overground as a fast and modern equivalent of the Underground. This in turn will boost the image of the service and areas served by the line, thus assisting regeneration.

Electrification will play rail's part in reducing oxides of nitrogen, one of the worst by-products of diesel propulsion.

Commitment to electrification at last

Transport for London, the Rail Freight Group, the line’s passengers, and informed rail experts were all convinced of the unanswerable case for an electrified GOBLIN.

In the Chancellor of the Exchequer's Autumn Statement on 5 December 2012 the scheme lost out again. On 20 December Jeremy Corbyn MP received the following written answer, to this question: To ask the Secretary of State for Transport what recent (a) information, (b) advice and (c) reports he has received on the case for electrification of the Barking to Gospel Oak section of the North London Line; and if he will make a statement (134793). Mr Simon Burns: Although there is no new funding available, the Department is working with Transport for London and Network Rail to review the case for electrification. A detailed breakdown of the £90 million cost of electrification has been provided by Network Rail. Transport for London has provided its business case for using longer electric passenger trains and has offered £25 million towards the cost of electrification.

Network Rail's Strategic Business Plan for their Control Period 5 from 2014-19, published in early-January 2013, was the next official word on the subject. The ORR ran a public consultation on the SBP until 19 February. The next step was publication on 12 June of their Draft Determination on that Plan, accompanied by the start of a consultation until 4 September. Then the ORR's Final Determination was issued on 31 October 2013. Finally, just before the start of Control Period 5 on 1 April 2014, Network Rail published their five-year Delivery Plan for 1 April 2014 to 31 March 2019. Full details on the ORR website here.

Then, at long last, a day after the Chancellor of the Exchequer announced the Comprehensive Spending Review for public spending in 2015/16, Chief Secretary to the Treasury Danny Alexander published Investing in Britain's future on 27 June 2013 and there in para. 3.21 is the good news!

Electrification of Gospel Oak-Barking is now embedded in Network Rail's Enhancements Delivery Plan for CP5. See 'England and Wales Projects: Anglia' in which "infrastructure ready for use" is given as June 2017.

Railfuture has continued to champion the cause of an all-electric GOBLIN!

You can write to the four Members of the Greater London Assembly along the line - for Barnet & Camden, Enfield & Haringey, North East, and City and East: GOBLIN Assembly Members.
or the nine MPs along the line: see a map of GOBLIN constituencies (names subject to change!) and contact GOBLIN MPs.