The 7 miles of railway from March to Wisbech closed to passenger services in 1968 and to freight in 2000. Reopening the line would connect the 30,000 people living in Wisbech and the surrounding area with the National Rail network. The majority of the track is still in place, although it would need to be replaced to allow new trains to run. Existing level crossings would need to be upgraded to modern standards.

A direct train service to Cambridge is proposed with a journey time of around 40 minutes, much faster than a car journey or existing bus service. Trains would call at March, Ely and the new station at the Cambridge Science Park. Such a service would improve access to jobs and education and help connect Fenland with the rest of Cambridgeshire. Passengers would be able to connect with other train services to London, other centres in East Anglia, the Midlands and the North West. A stop at Manea would significantly improve the service to this expanding community.

Map of the proposed service 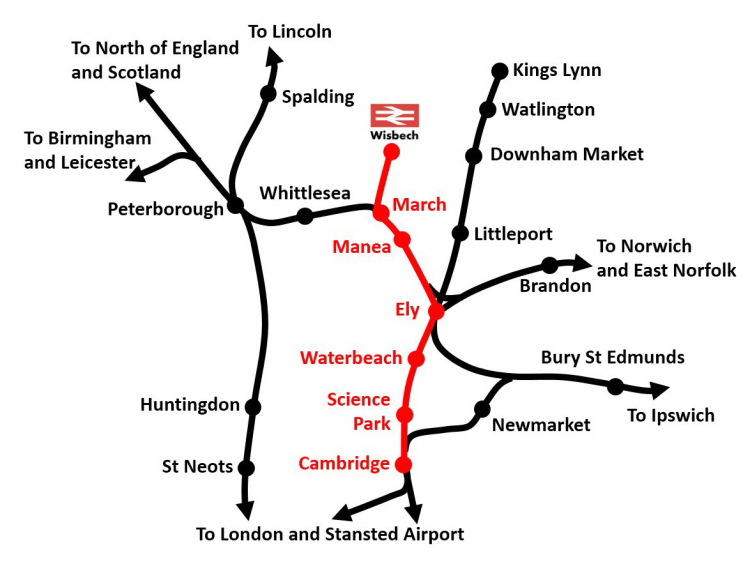 What is happening now?

Wisbech Town Council support the rail reopening. Cambridgeshire County Council are carrying out feasibility studies into the rail scheme. The first part of the study, looking at operating costs and likely usage, is already complete and predicts the line would be profitable. A second item of work will look at the costs of reopening including the location of the new station in Wisbech.

The profile of the Wisbech Rail Reopening scheme has been raised to a national level by Steve Barclay, MP for North East Cambridgeshire, hosting a Rail Summit in Westminster with Transport Minister, Stephen Hammond, key local stakeholders and rail experts including Railfuture. Mr Hammond recognised that reopening this line is considered a strategic priority. He made clear that transport schemes can be accelerated where there is strong political and business will to do so, and he also signalled that he particularly valued a bottom-up approach where local expertise informs rail priorities and that he was keen to work with the promoters of this scheme moving forward.

Cambridgeshire County Council’s wider economic benefits survey which was published in April 2014 estimates the line would return £3 of benefits for every £1 spent giving the reopening a very strong value-for-money case. In July 2014 the government announced that £250k of funding will be available via the Greater Cambridge Greater Peterborough Local Enterprise Partnership for the Network Rail GRIP 2 engineering study.

In February 2014 it was announced at an infra-structure update meeting of stakeholders chaired by Steve Barclay MP that the economic case for the project had gone up to a return of £4 of benefit for each £1 of cost. Steve Barclay considers this means that the project can proceed straight to Grip 3 without the need for the current Grip 2 study to be completed, because we know the scheme is viable.

The government had already announced they have provisionally awarded £10.5 million to be allocated between 2016 and 2020 for further work on key aspects such as the location of the new station, which the infra-structure update meeting agreed should be within Wisbech rather than off the A47. Steve Barclay now wants to see that money being brought forward to 2016 rather than left until 2020.

The meeting also agreed to keep both freight and electrification as options and these will be considered in the Grip 3 study, subject to Cambridgeshire County Council and the LEP ratifying the decision to proceed with this essential foundation work.

Cambridgeshire County Council published the GRIP 2 study in August 2015, showing high value for money. Check our campaign site http://wisbechrail.org.uk/ for up to date information about progress.

In 2018 Railfuture joined together with local people, rail planning experts and influential local business leaders to progress Wisbechrail through a new group they have set up called the Wisbech Consultative Group. This will harness peoples’ ideas about where the station should be, what facilities it should have and a new half-hourly train service.

Railfuture’s East Anglia Branch gathered signatures to support the reopening through a petition. There is huge support for the idea, and when the petition was handed to Cambridgeshire County Council in July 2013 it had attracted 3784 supporters. The campaign is being done on a local level; leaflets (PDF download) were distributed to every household in Wisbech and the surrounding villages, supported by local media coverage which is raising awareness over the whole length of the line into Cambridge, backed up by Facebook and Twitter. The majority of people signed the petition on the campaign’s website although some of the names were sent by post or collected on paper forms in the local library and market place.

The majority of people using the line will live locally, and therefore the petition has deliberately only been publicised locally, with postcodes being gathered to show where the support is coming from. For this reason the campaign website stands alone from the main Railfuture one as we have not been trying to gather signatures from the general Railfuture membership, although we of course hope that many of you will enjoy travel on the reopened line at some time in the not too distant future. Now that the petition has been handed to Cambridgeshire County Council, the campaign has entered a second phase where we are working to build a partnership of stakeholders who will make sure a successful reopening scheme achieves its ultimate goal of a rail service connecting Wisbech and Cambridge. The rail summit was the first step in that process; we will be applying pressure where appropriate with the help of our supporters to make sure the process stays on track through the various steps.

For further information about the campaign please refer to http://wisbechrail.org.uk/ which includes: