BRANCH COMMITTEE MEETINGS : Branch Committee meetings are held on the second Wednesday of the month (except August and December). Normally we meet at the Chiltern Railways meeting room, platform 3, Moor Street Station, Birmingham, and meetings are open to all members. However due to CoViD restrictions meetings at present are online only, by Zoom. Further announcements in due course.

Other events to be notified.

Click events for regional and national events for rail campaigners, including Railfuture and other conferences.


ONLINE 2021 AGM
Branch AGM was held on-line on 24th April 2021 with guest speaker Linda McCord, Senior Stakeholder Manger for Transport Focus. She and members engaged in a lively conversation about how to encourage passengers to come back to train travel.
In the business section, the Chairman highlighted a number of issues from his previously distributed report. The following were elected to the committee; Steve Wright (Chair), Colin Major (Secretary), Phil Bennion, Peter Kennard, Roger King and new to the committee Owen O'neill and John Gaussen. Steve Boulding was accepted as a co-opted member. This leaves us with two vacancies, and in particular we would welcome on board members from the Wolverhampton or the Black Country, and North West Staffs to bring the committee up to full strength.
After the elections a further discussion about future campaigns took place.

ONLINE MEETING
Branch Open Meeting- On 14th October 2020 we held an online Meeting open to all Branch members where the attendees reported their experiences in using trains during the current restrictions and gave their suggestions for future campaigns. These include reviewing WMRE Rail Strategy, contacting the next Mayor of WMCA, and support for various developments in Shropshire, including discussion for TfW Rail about future services on the Welsh Marches line 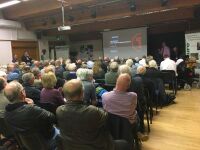 A more detailed report is available on request.