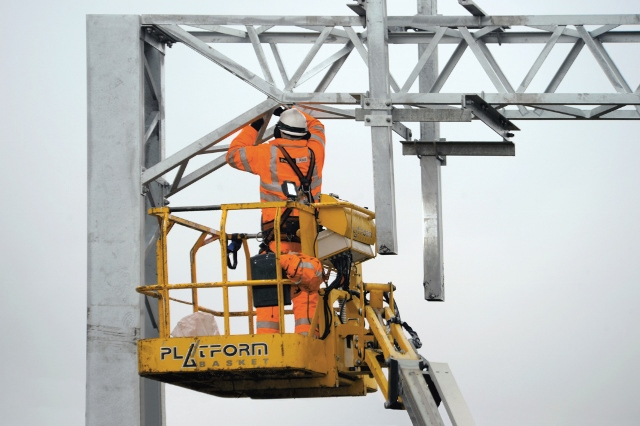 Britain needs to invest in its transport infrastructure to promote economic growth, but further electrification delays show that Network Rail does not have the capability to deliver its expansion programme in the timescale needed. Railfuture analyses the cause of the problems at Network Rail and suggests a way forward.

On 8th November 2016 the DfT announced that four projects within the Great Western Electrification Programme were being deferred due to the rising cost: electrification between Oxford and Didcot Parkway, of Filton bank, between Bath Spa and Bristol Temple Meads, and the Thames Valley Branches. The National Audit Office has found that the Benefit/Cost ratio or Great Western electrification has dropped to 1.6, which is defined as low value for money. It is also significant that although unpaused by Peter Hendy earlier in the year, there is still no committed date for electrification of the Midland Main Line except between Bedford and Corby.

In our meeting with the Rail Minister, Paul Maynard MP, on 28th November 2016 we expressed concern that Network Rail does not have the capability to deliver its expansion programme in the timescale needed. This is having serious effects on the reputation of the rail industry as a whole and is impacting on the rolling stock cascade and on opportunities for smaller schemes with significant local benefits.

Rail is a specialised industry, so there is a limited pool of skilled resources with rail experience. The root cause of Network Rail’s failure is that around 10 years ago, NR had a policy of removing the 'old guard' (who had the rail experience). This lack of experienced resource has led to a greater incidence of mistakes, both in estimating and on delivery, so increasing costs.

Rail is also a safety critical industry so NR has a risk averse culture. This is fine in an operational context, but managers who had grown up in operational roles took that attitude with them into business roles. The result is that decisions are not made quickly, which wastes money. The risk averse culture and lack of experienced resource has also led to a reliance on over-heavy processes so that no one person can be accused of making the wrong decision, further stifling decision making, and rigid application of standards rather than the use of common sense, further driving up costs.

In response to passenger growth the government increased the demand for rail enhancements, to which NR, believing that because they were contracting out development work their capacity was unlimited, kept saying yes. The result was that NR programs and projects were bidding against each other for that limited pool of experienced resource, driving up prices.

On 29th November 2016, the day after our meeting with the Rail Minister, the Transport Secretary Chris Grayling MP spoke to the Civil Engineering Contractors Association on the skills and infrastructure needed to sustain transport investment in the UK:

‘One of my first actions in this job was to confirm my support for HS2.
Look ahead to 2020. Transport for London hits a peak construction phase, thanks to projects such as Bank station upgrade and the Northern Line extension. TfL will need a further 8,000 construction professionals, including thousands more engineers.
And then there’s HS2. When does Phase One hit peak construction? Naturally, in 2020. By then the project will need an extra 27,000 construction professionals, including over 8,000 engineers. In total, we think to get all this work done, we’ll need an extra 56,000 skilled workers. And the demand won’t fall once we get past 2020.
So I have a straightforward message for all the companies operating in this field today. If you want to win contracts in transport. If you want to be part of the government’s investment programme.
You must prepare to leave a skills footprint in this country. We want to see that you’re thinking about the future of the industry. We want to see that by the end of the contract, your company will have greater depth in skills than at the beginning. That means investing in training. It means hiring more apprentices. It means hiring from a wider pool of talent.’

Network Rail must also take the Transport Secretary’s advice. In our view Network Rail’s way forward is as follows:
Network Rail will have to compete with HS2 and TfL for resources. It will be a long slow process for it to reach a position where it can meet the demand for expansion at a fair cost. In the meantime: