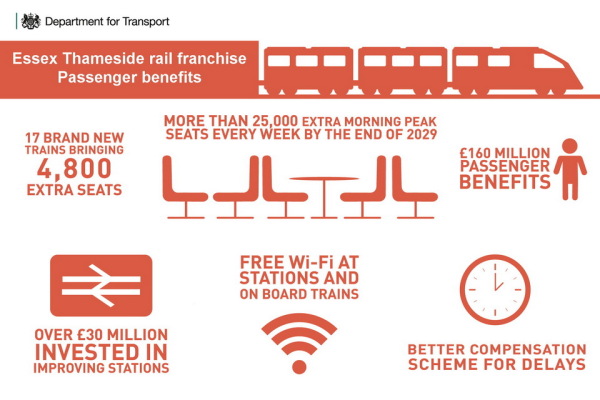 The Department for Transport announced today that National Express has won the Essex Thameside franchise competition, retaining c2c and so avoiding an unseemly exit from the British rail industry.

Essex Thameside, the London Fenchurch Street to Southend line, has a key role to play in connecting the massive commercial and residential developments in the “Thames Gateway” region.   National Express has run the franchise for the past 14 years under the c2c brand.

Although the smallest of the key commuter routes into the capital, the franchise has been of outsized importance to National Express. Once the country’s largest post-privatisation train operator, the National Express empire shrank, finally handing back the keys to the East Coast franchise in 2009, and losing the competition for its Greater Anglia franchise in 2011.

The present franchise, which generates a £150 million annual turnover and brought in £10 million of profits for National Express last year, is expected to grow at a rate of about 7.5 per cent a year. That will come on the back of a 3.5 per cent a year growth in passenger volumes with the rest made up in inflation-linked fare prices.

The new franchise agreement starts on 9 November 2014 and will run until November 2029. It is understood that National Express will pay £1.5 billion in premiums to the Treasury over the next 15 years, which will be worth nearer £2 billion when adjusted for inflation.

The competition for Essex Thameside had seen it shortlisted alongside FirstGroup, the Hong Kong rail operator MTR, which runs the London Overground, and Abellio which had previously won Greater Anglia from National Express.

Today’s announcement was due to have been made last month, and news of a further delay caused fears that the DfT’s new franchising arrangements might be unwinding. Of that delay, Patrick McLoughlin, the transport secretary, said: “We are making sure that the best decision is made so that we can secure the best possible service for passengers in the future.”

As part of the deal c2c has committed to rolling out a host of passenger benefits costing around £160 million. These include:

The operator has also committed to hitting tough new targets for punctuality, which means more than 90% of services will be required to reach their destination within 1 minute of the timetable by December 2018.