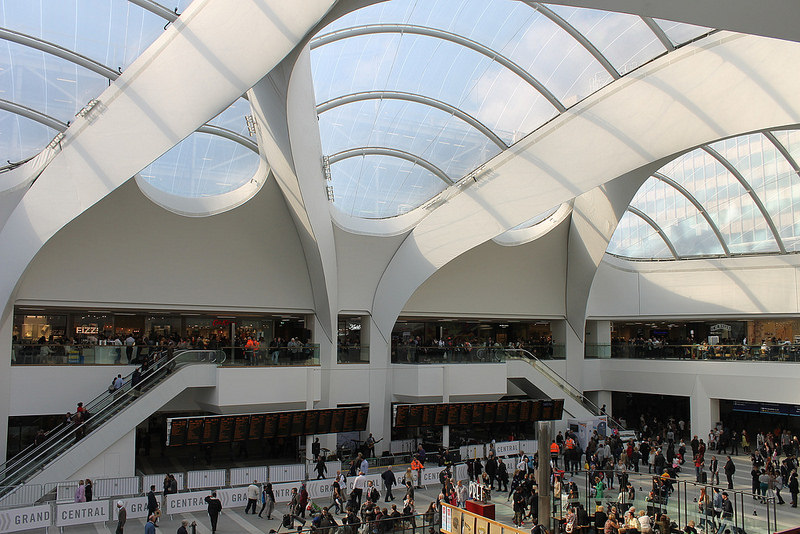 This week has seen a massive improvement for passengers, with the opening of the refurbished station at New Street in Birmingham. £750 million has been spent on a huge new glass and steel domed roof covering the atrium – a modern take on the largest glass and iron roof in the world, measuring 65m x 256m, which Victorian designers constructed for the station when it was originally opened in 1854.

Since the late 19th century New Street has been one of the busiest stations in the country as passenger numbers continue to grow. By the mid 1960s, to coincide with West Coast Main Line electrification, and at a similar time to the closure of the city’s ex-GWR Snow Hill station, New Street had to be rebuilt. The wonderful Queens Hotel was demolished as were the airy platforms (by this time minus the roof damaged in the war), to be replaced by a stark concrete block called the Pallasades Shopping Centre, with space for a few trains underneath!! Quite an innovation at the time, but New Street soon gained the reputation of one of the dingiest and least liked stations in the country......until now.

From the outside visitors could be excused for thinking the station had been renamed ‘Grand Central’. This is the name of the ‘new’ £250 million shopping centre which also opened this week, including 200,000 sq ft of quality retail units on the first floor of the atrium, plus the largest John Lewis store outside London.

By Christmas the Metro link to Snow Hill and beyond should open. Within the next twelve months there will be brighter, lighter, more easily accessible platforms, with all construction/refurbishment work being carried out without any (additional!) disruption to traffic.

It is no doubt a good deal for the passengers and the shoppers. However track level congestion was never even on the agenda - the new station provides no extra track capacity, so competition between operators for paths is intense. Yet to attract and carry all the extra passengers which the station can handle, metro frequency suburban services are needed.

When HS2 opens in 2027, Birmingham will have another new station at Curzon Street. Railfuture supports the West Midlands Curzon Street Masterplan to integrate the HS2 Birmingham station into the city, with light rail extensions and connectivity with metro suburban services.