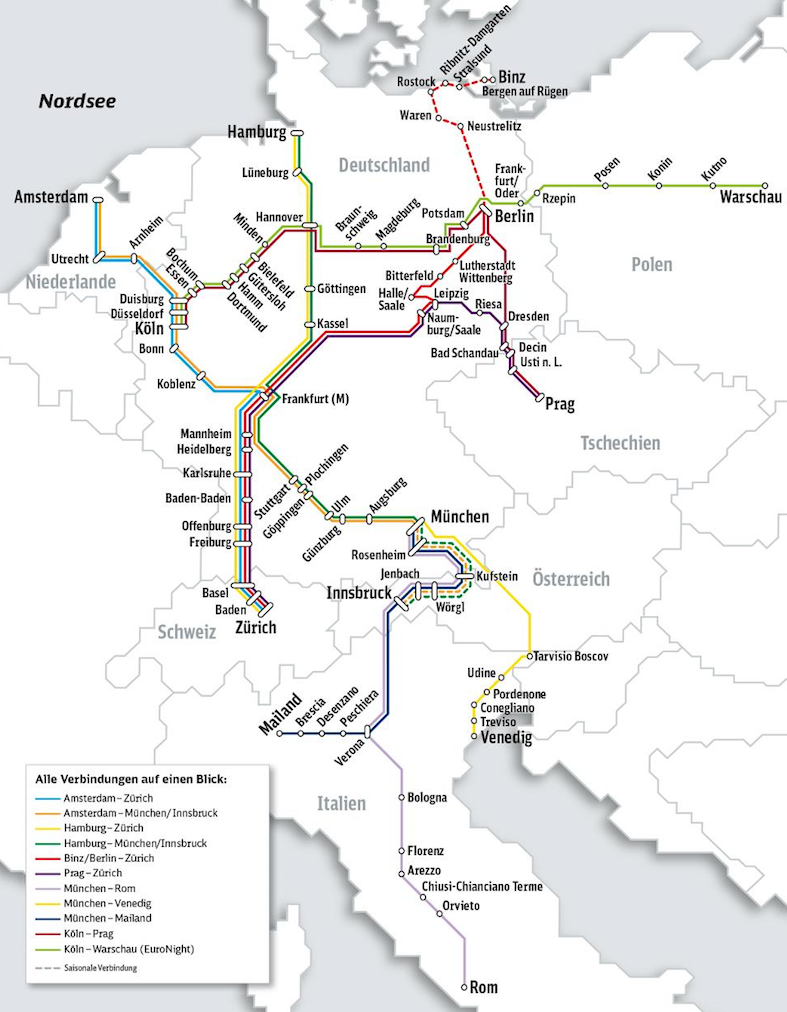 DB’s night train network in 2016
British travellers who rely on night trains to get them across Europe could be in for a big shock next year.

Deutsche Bahn wants to axe all its night trains.

However, with the encouragement of many politicians and bureaucrats, the “cheap” airlines have undermined the short-term business case for night trains because environmental costs are not taken into account.

British travellers make up a good percentage of DB night train passengers, but many British MEPs fly to Brussels rather than take the train and have not responded to British travellers’ demands for better rail links to Europe.

At the moment, night trains offer a comfortable way to travel by night, providing sleeping coaches, couchette cars and coaches with reclining seats.

DB wants to abandon all its sleeper and couchette trains because it deems them unprofitable and replace them with normal Inter City Express and Inter City trains with upright seats only, full lighting and loudspeaker announcements all night. Forget trying to get a night’s sleep. DB is even talking of buses replacing some night trains.

Railfuture believes that night trains are purpose-made for the 21st century because they make travel possible 24/7.

One angry rail campaigner said: “Abolishing sleepers and couchettes is a return to the 18th century, to the stagecoach era when you had to stop in the evening, find a hostel, and continue your journey the next morning.”

DB’s night trains have linked cities throughout Europe in the past. Stockholm, Oslo, Copenhagen, Brussels, Ostende, Paris, Naples, Athens and many ski resort towns in the Alps have been on the destination list in former years.

There have already been some cutbacks but in early 2016, a night train network survives and passengers can save their days for sightseeing and travel by night on a wide variety of routes that connect Austria, the Netherlands, Italy, Switzerland, Poland and the Czech Republic.

One great advantage of travelling with night trains is the convenience of boarding a train in one city centre and arriving the following morning in the heart of another.

Railfuture members and others could write protest emails to DB’s chief executive officer Rudiger Grube at ruediger.grube at deutschebahn.com and to Martin Burkert, chairman of the German parliament’s transport committee at martin.burkert at bundestag.de with a copy to their MEP and to editor at railfuture.org.uk