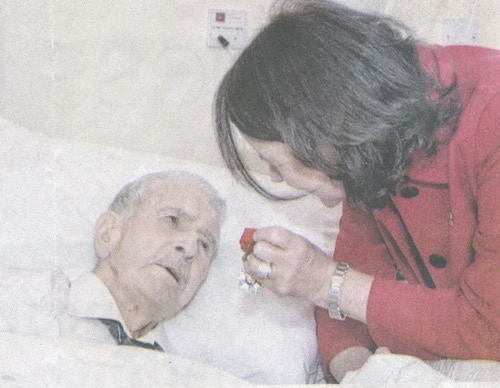 A French consulate official with Geoffrey for the presentation Picture: TERRY FISHER


Railfuture veteran Geoffrey Penn has been presented with the Legion d’Honneur for his part in the liberation of France.

Geoffrey who is 94, now lives at the Old Vicarage care home in Leigh, Sherborne, Dorset.

He joined the Army as a private, and trained to be a morse code radio operator and motorcycle despatch rider.

He later became an aide to General Montgomery who, after a few years, led Allied forces as a Field Marshal.

By the time he took part in the Normandy landings in 1944, Geoffrey was an officer in the Royal Signals. He spent a year with the Army in north west Europe.

A representative from the French Consulate travelled to Sherborne for the presentation to Geoffrey who was joined by his daughter Diana and sons Richard and Charles.

Geoffrey is a distinguished member of Railfuture who was a member of the parliamentary committee and “had the ear” of former Lib-Dem leader Paddy Ashdown, MP for Yeovil. Geoffrey was also chairman of the Yeovil & District Rail Action Group.

With Tony Smale, he jointly produced a report about rail privatisation for Friends of the Earth.

Information from the Blackmore Vale Magazine.