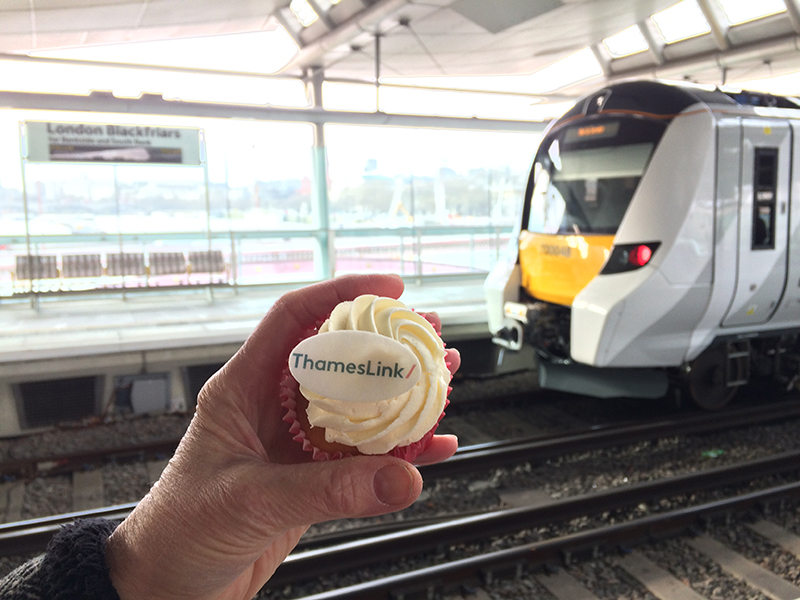 For the first time, trains were using new tunnels near King’s Cross and St Pancras stations allowing Thameslink trains from Surrey and Sussex to operate new services to Cambridge and Peterborough, via London Bridge and Farringdon.

Three trains ran in each direction today but in the next few months the service will build up.

Along with the cakes, staff handed out leaflets which said: “We are giving you a first taste of an historic new Thameslink service between Cambridge and Brighton, and Peterborough and Horsham.”

Thameslink trains will eventually run from 80 more stations, which will bring the number of Thameslink stations to 140.

The expanded Thameslink network will mean fewer passengers will have to switch to the London Tube to complete their journeys.

In December, Farringdon will become a crucial interchange point when new Crossrail (Elizabeth line) trains will connect with Thameslink.

Thameslink passengers will be able to interchange at Farringdon to get to Canary Wharf, Paddington and many other destinations.

International travel will improve, with better rail links to Gatwick, Luton and Heathrow airports as well as Eurostar trains at St Pancras International.

The £1 billion upgrade began life as Thameslink 2000 but, because of delays along the line, is now called Rail Plan 20/20.