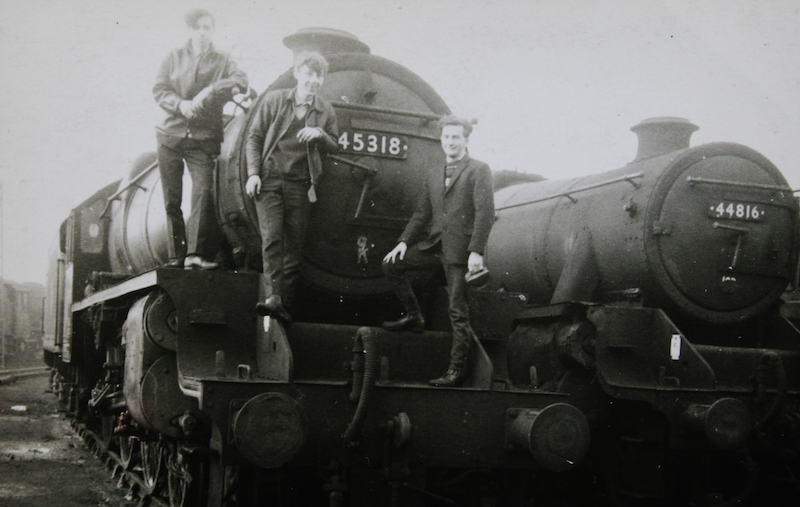 Author Stephen Leyland, left, his brother Martin and friend Vernon Sidlow on black 5 45318, before starting a cleaning session at Bolton loco shed in the 1960s. 45318 went on to haul the last scheduled BR steam passenger train on 5 August 1968, from Preston to Liverpool.
Railway enthusiast Stephen Leyland is launching his book about the last year of steam power on Britain’s railways at Bolton station’s community gala on Saturday (30 June 2018).

The book charts the last few months of steam in the north of England, when he and his friends spent time photographing and recording the surviving steam locos of Britain.

Stephen was among those who photographed and travelled behind the last giants of steam. He and his friends also spent Sunday afternoons at Crescent Road loco sheds cleaning up the surviving locomotives.

Bolton developed a reputation for having the best turned-out locomotives on BR in the last few months of steam, mostly down to the hard graft of Stephen and his mates.

Bolton was also one of the last locomotive depots to keep steam power. It closed on 30 June 1968, along with other Greater Manchester depots at Patricroft and Newton Heath. The last three depots in Britain to have steam were Carnforth, Rose Grove (Burnley) and Lostock Hall (Preston). These closed on 6 August 1968.

The book British Railways Steam 1968 – The Final Chapter is published by Crécy and priced £25. It is a fully illustrated, large format hardback. Stephen will be at the community gala at Bolton station to sign copies of the book.

Admission to both the lecture and the gala itself is free. It is expected that some retired steam drivers from Bolton shed will be at the gala and the evening lecture.