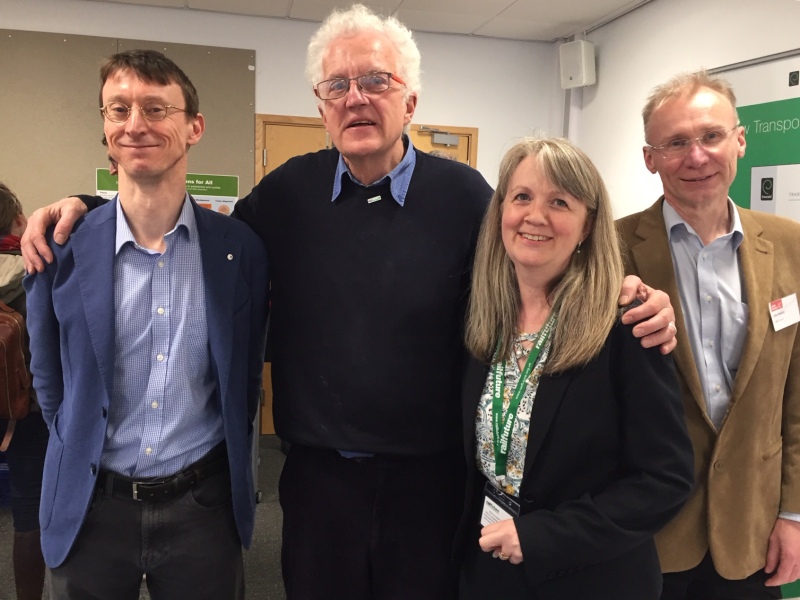 Graham Parkhurst is a long-term fan of Christian and had even brought along Christian’s now out of print book, 'Stagecoach', for him to sign!

The two presentations of the award winning research were really interesting, very different research methodologies and both exploring new technologies... they were later to hear later some gentle and amused scepticism from Christian about both. 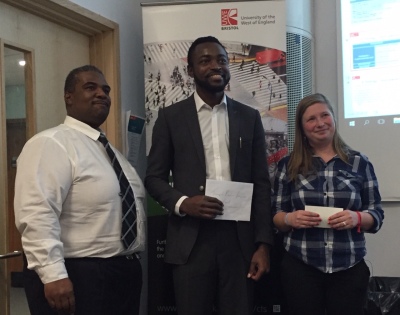 Onyeke Okeke (centre) looked at the impact that autonomous vehicles could have on parking provision at UWE’s Frenchay Campus and in a mesmerising presentation showed parking spaces could be slashed freeing up enough space for the two other UWE campuses potentially to relocate to the Frenchay campus.

Alexandra Istrati (right) looked at the feasibility of drones delivering boxes of packages to retailers in the city of Bristol. She recognised the major obstacles that would need to be overcome. An initial costing analysis suggests they shouldn’t be launched from outside the city but use vehicles to drive the drones into local centres and launch from there ... reasons of cost, battery life etc. She fully recognised the huge (possibly insurmountable) legal and insurance issues too – but thought provoking none the less.

Christian sounded off at some length about the prospects for autonomous vehicles, saying that one reason there was so much (in his view unwarranted) hype about autonomous vehicles was the amount of government and private funding being made available for research into the topic ... it was to transpire later that much (most?) of UWE CTS research projects were focussed on autonomous vehicles and that was because of the funding they’d received and could obtain!

He then turned to the railways, which you can watch below, stating they were at a key moment in their history with the Rail Review currently underway and the promise of a white paper to shape government policy.

The audience included UWE academics, academics from other West Country academic institutions, members of transport organisations and some students. Certainly the profile of Railfuture was raised although conversion into a flood of new members will be harder! Railfuture director Wendy Thorne ensured very visible Railfuture branding with a Railfuture tablecloth and Railfuture goody bags.

As I left to ferry Christian to Bristol Parkway, Graham said to me he would like to develop the association between UWE and Railfuture.

We plan to set up similar events at other universities with major Transport faculties.