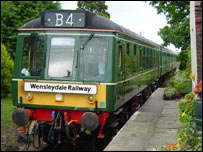 People with £100 to invest are being offered the chance to back the Wensleydale Railway, which started passenger services a year ago, allowing passengers to access the dale without wrecking the environment by travelling in cars.

The railway is offering £2.75million worth of shares and the funds raised will allow the company to increase the frequency and speed of its services.

It also wants to open five new stations and operate freight services - to reduce the number of heavy lorries using narrow, country roads. - on the 22-mile line between Leeming Bar and Leyburn.

The new stations will be at Redmire, Finghall, Newton-le-Willows, Bedale and Northallerton. A sixth is proposed for Scruton in a partnership with residents.

A special train was run on 5 July 2004 to highlight the share offer.

WR has been operating the line between Northallerton on the East Coast main line and Redmire for 12 months after converting the freight-only line to carry passengers. Regular passenger rail services are now part of the fabric of Wensleydale life.

Chief executive Scott Handley said the company had a policy of using local suppliers and contractors wherever possible.

"By being responsive to the needs of the local community we have been able to bring new jobs, assist in the regeneration of the local area and bring back into use a wasted community resource, all for a fraction of the high costs we have become used to for railway projects," he said.

The company holds the Wensleydale line on a 99-year lease from Network Rail which is the only arrangement of its kind in the UK. This means it can operate both the trains and the track, avoiding the split which many feel have led to an undue complexity in the national rail industry.

Passenger trains are currently operated by refurbished diesel multiple units. which offer comfortable seats, a good ride, great views from the large windows and a large goods and cycle storage area. As part of the development plan locomotive-hauled trains will be introduced, as may light rail on certain sections.
The company runs shops and cafes at the stations and organises a range of special trains, including a Royal train, Christmas specials and, most recently, a funeral train for one of the supporters of the line.
The company is considering bidding to operate other rural lines and has already identified a number for which its business model would be appropriate.

Copies of the share prospectus can be obtained by calling 01609 779368 or by registering on-line at http://www.wensleydalerailway