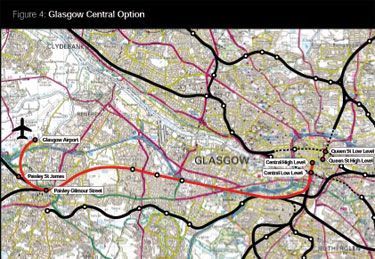 The prospect of a rail link to Glasgow airport has moved ahead with a three-month public consultation exercise being launched.

The rail link is now seen as vital to alleviate congestion on the M8 and will help to contribute to the continued growth of the airport, which employs 15,000 people and is reportedly "one of the biggest wealth generators" in the west of Scotland.
.
The public consultation was launched on Monday 1 November at Glasgow Central station by Nicol Stephen, Minister for Transport, and Councillor Alistair Watson, chair of Strathclyde Passenger Transport.

The public consultation closes on 11 February 2005. It involves distributing over 20,000 information leaflets to homes and business along the route of the proposed link, as well as to passengers on local train services.

A series of public exhibitions and meetings are being held and a website has also been set up.

Consultants have been investigating the feasibility of building a direct rail link to Glasgow Airport for five years and a preferred route has been identified, which mainly follows existing rail lines.

The proposal is to upgrade five miles of existing track between Shields Junction and Paisley Gilmour Street Station and to lay one mile of new track between Paisley St James station and Glasgow airport. The new track will cross St James Park and the M8.

Nicol Stephen, Minister for Transport, said, "The recent Scottish budget underlined our commitment to investing in major public transport improvements such as a new direct rail link to Glasgow airport.

"The recent Scottish Budget means by 2007/08 we will have £1.4 billion a year to spend. By investing in new infrastructure projects, we can make a real difference for the thousands of passengers who stand to benefit."

Councillor Alistair Watson said, "The Glasgow airport rail link is vital to prevent traffic on the M8 grinding to a halt completely. Taken together with the Crossrail Project, it also has the potential to close a gap in the rail network and open up Ayrshire for businesses and commuters.

"The preferred route would lead to the loss of some of the playing fields at St James Park. We realise this is a big concern for many people living in Paisley but we are working closely with Renfrewshire Council and the local community to find a solution to this."

The link is expected to generate a range of economic benefits for Glasgow, for the Paisley area and for the west of Scotland as a whole.

A number of options have been looked at for crossing the M8 and St James Park and illustrative maps of these routes are available.

Surface Option A: This option is the most westerly and would bypass St James Park. It is the most expensive option and also has a high impact on the environment.

Surface Option B: This would run along the edge of St James Park, next to the M8 before crossing the A726 to the south of St James Interchange and the western end of St James Avenue. This option is expensive and involves people losing their homes. The journey time on the rail link would also be longer.

Surface Option C: Crossing Greenock Road on the east of the park, then carrying on through Murray Street industrial estate. This route would have a significant impact on Greenock Road and would mean demolishing homes. The angle of this route also limits where the station can be positioned at the
airport.

Surface Option D: The preferred route This route runs through the Murray Street industrial area before crossing the A726, going though the centre of the St James Park, before bridging the M8 at its lowest point, just beyond the corner of the playing fields. This option has the least impact on
people's homes and is cost effective. It is more straightforward to build so there is less likelihood of costs ballooning. The angle of the route allows more flexibility on where to site the airport station.

Strathclyde Passenger Transport is Scotland's only passenger transport authority and executive and operates subway and ferry services for 42 per cent of the nation's population. It finances ScotRail passenger services in the west of Scotland and sets train fares and timetables. It also subsidises
about 150 bus services in areas where local communities are not already served by commercial operators.