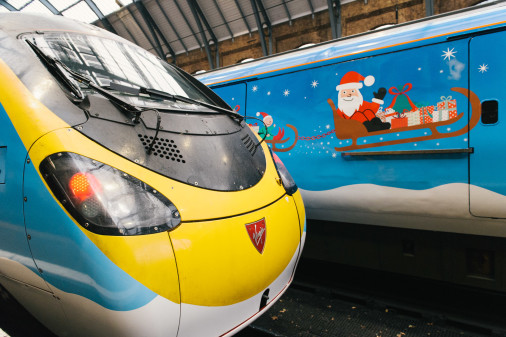 Virgin painted some of its trains for Christmas but will not run any trains on Christmas Day or Boxing Day
Chiltern Railways is proving again this year why it is one of the few successes of rail privatisation.

While most train operators fail to respond to the demand for Boxing Day trains, Chiltern is running an 08.00 to 20.00 service between London to Oxford Parkway, calling at Bicester Village shopping centre.

However, few people will have the opportunity to travel by train on Boxing Day, even though millions want to visit friends and family and travel to sporting events and although most politicians are on holiday, a significant number of people also have to get to work on Boxing Day.

It is a massive failure of Network Rail and the train operators to face up to their social responsibilities, and to recognise the commercial demand for trains on Boxing Day.

This year, the Government is also being accused of failing to take action to include Boxing Day trains as a requirement when franchises are renewed.

The Department for Transport has failed to include Boxing Day trains in the three franchises it has awarded since 2012: Virgin Trains East Coast, Thameslink and c2c.

The DfT has also failed to specify Boxing Day trains in the 10 direct awards franchise extensions since 2012.

If the Government had done so, most of England could have had Boxing Day trains.

Even in London, where the whole economy depends on rail, only the Underground is running on Boxing Day (a Sunday service. The growing Overground network will be silent.

The Sunday Times reported that 22 of the 31 train companies will run no services on Boxing Day.

Railfuture president Christian Wolmar said: “We should be moving to a situation where we can use the railway on Christmas Day and Boxing Day. We live in a 24/7 society.”

Trains that are running on Boxing Day:

ScotRail is running trains in Strathclyde only, and Southeastern will run Javelin trains between London St Pancras and Ashford from 08.00 to 20.00.

Merseyrail is running a limited service between 09.00 and 18.30 at selected stations.

Eurostar will operate a Sunday service.