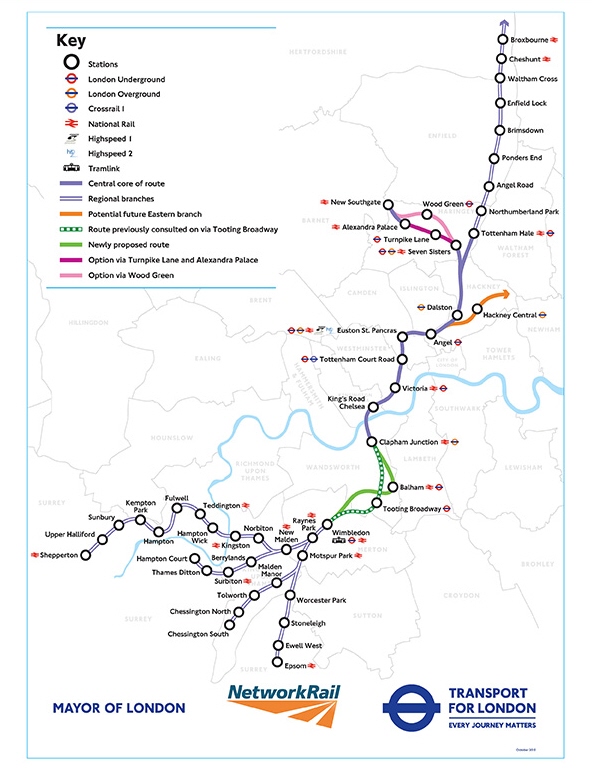 By the 2030s London will be a megacity of more than 10 million people. Even allowing for planned investment and the imminent arrival of the East-West Crossrail line, the capital will grind to a halt unless significant further improvements are made. That’s why London needs Crossrail 2 as quickly as possible.

On 10 March 2016 the National Infrastructure Commission published its report ‘Transport for a World City’. The Commission’s central finding is that Crossrail 2 should be taken forward as a priority. Funding should be made available now by DfT and TfL to develop the scheme fully, preparing a revised business case by March 2017 with the aim of submitting a hybrid bill by autumn 2019. This would enable Crossrail 2 to open in 2033, in time for the planned arrival of HS2 phase 2 at Euston.

In the budget on 16 March 2016 the government gave the green light to Crossrail 2, providing £80 million to help fund development and asking Transport for London to match that contribution, with the aim of depositing a Hybrid Bill within this Parliament.

The key objective of the scheme is to unlock the development of thousands of new homes which are essential to house London’s growing population and therefore enable economic growth. It will also relieve severe overcrowding across some of the busiest Network Rail stations in the country, and the most congested Underground lines and National Rail commuter routes.

Crossrail 2 will provide a new artery across central London. The current plan links South Western suburban services from Hampton Court, Epsom, Chessington, and Shepperton, via a brand new tunnel between Wimbledon and Tottenham Hale, with West Anglia services from Broxbourne and a new branch from New Southgate. Key strategic benefits will be to:
New property development is already under way in anticipation, for example around Epsom.

The report recommends that Crossrail 2 should be at the heart of the new London Plan, alongside existing commitments to upgrades and other pieces of new infrastructure. Significantly it also recommends that Crossrail 2 should not prevent the development of other affordable high value schemes, such as the Bakerloo line extension, through alternative financing mechanisms like that used for the Northern line extension to Battersea/Nine Elms.

The Commission identified four crucial ways in which the scheme can be developed to maximise benefits and increase deliverability: phasing parts of the scheme (and therefore cost), fair funding with London paying more than half the cost, private financing to help build stations and, crucially, a clear, transformative strategy to turn the proposed 200,000 new homes into a reality and deliver the benefits.

The most promising option identified to enhance affordability would be to delay the construction of the north-western branch to New Southgate. This is because the Broxbourne branch unlocks significant housing growth in the Lea Valley, whereas New Southgate does not. This could reduce the costs of the initial scheme in the 2020s by around £4 billion.

The report notes that if construction of the north-western branch is delayed, this provides an opportunity to consider the case for an eastern branch from Hackney as an alternative.

However capacity on C2C services is constrained by the double track approach to Fenchurch Street and the 4 terminal platforms there. The Anglia Route Study offers no viable infrastructure solution; once all peak trains have been lengthened to 12 cars, the only option is to use high density trains like the Class 700s about to be introduced on Thameslink. The proposed density of 4 standing passengers per square metre may be acceptable for 20 minutes, but not for a journey from Southend.

Crossrail 2 services would connect via Hackney and Stratford to the existing Essex Thameside lines at Barking. This would enable new services to run from Basildon and Grays to Central London. The Eastern Phase would reduce travel times, some by as much as half, saving up to 30 minutes on journeys between Essex, Thurrock, East and Central London. An interchange at Stratford International would allow for fast connections with Kent High Speed services, the Overground, the Underground, Docklands Light Railway and the new Elizabeth Line.

East London, Thurrock and South Essex make up one of the UK’s largest strategic locations for growth and development. The eastern branch would provide the transport infrastructure required to realise and sustain this ambition.

Buried in the detailed National Infrastructure Commission report Review of the case for Large scale Transport Investment in London (at para 3.5 on page 41 of the pdf) there is a hint at Crossrail 3:

'There is currency in the view that there is a case for a third Crossrail scheme and one version of this would be to extend the existing Lea Valley line southwards from its end-point at Stratford to the Isle of Dogs and then southwards across the Thames to connect with the national rail network, possibly connecting with the Brighton Main Line and providing congestion relief to it.'

This careful wording describes the route from north to south, avoiding direct endorsement of any existing proposal, but it is clear that this is similar to the Railfuture Thameslink 2 proposal. The use of the ‘crossrail’ term could be taken to imply that it is the ‘metro’ option (ie suburban all-stops services) that is being considered.

Whilst the route through the Docklands does have the potential to attract private funding, we must wait for the outcome of the London and South Coast Rail Corridor Study, and possibly for the decision on whether the third runway will be at Heathrow or Gatwick, to find out what is proposed and the potential timescales. Railfuture campaign for urgent progress on the economic case for Thameslink 2.