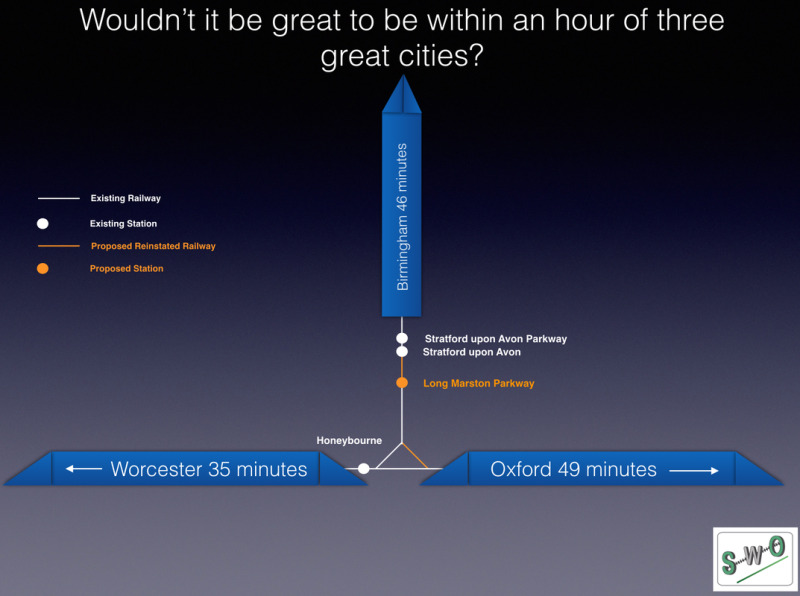 The reinstatement of the line would enable a Midlands train operator to offer a bi-directional circular service linking Birmingham, Solihull, Shirley, Stratford upon Avon, Long Marston, Honeybourne, Evesham, Worcester, and Stourbridge, which would broaden services efficiently and attract economic growth. In addition the Great Western Railway announced in February 2016 that it wishes to see the line reopened between Honeybourne and Stratford upon Avon so it can provide a Stratford - Cotswolds - Oxford - Reading - London Paddington service.

Housing growth of around some 15,500 homes is earmarked for the Stratford upon Avon District between 2016 and 2031. Over a third of the overall number, approximately 5,900 new homes are set to be built in the Long Marston area, within Stratford, Wychavon and Cotswold District Council areas, with a resultant population increase of 13,600 people. This includes a proposal for a 3,500 dwelling settlement on a 205-hectare site at Long Marston Airfield, and the developer planning the settlement, CALA Homes, has offered £17 million towards the reinstatement of the railway line.

The work locations for many of the residents of the new housing will be Birmingham, the West Midlands, Oxford, the Thames Valley, London and also westerly to Evesham, Worcester, Cheltenham, Gloucester and Bristol. With some housing already occupied at Long Marston, the village railway station of Honeybourne in Worcestershire (some 3 miles from Long Marston) has seen passenger usage increase by 9.2% between 2013/14 and 2014/15. The level of growth at Honeybourne is over twice the national average for railway passenger growth as reported by the Office of Road and Rail (ORR).  The growth would have been higher, had the car park not become woefully inadequate, dissuading later and off peak travellers from using the station.

If the 5,900 permitted and proposed homes south of Stratford near Long Marston are added to current and proposed developments within Stratford upon Avon over the next 15 years, some 9,000 new homes are due to be built. This will lead to a rise in population of around 18,200, which is over half the size of Stratford upon Avon again. Such growth in the area without an adequate, sustainable alternative means of transport will mean some 9,920 additional vehicles joining the local and rural road network. A new parkway station at Long Marston on a reinstated Stratford-Honeybourne railway line would address this.

Early in 2016 Stratford on Avon District Council promoted a bid to the Coventry & Warwickshire Local Enterprise Partnership (CWLEP) for part funding for a full GRIP 4 (Single Preferred Option) Study. However CWLEP rejected the bid for reasons which have not yet been made public.

Warwickshire County Council have taken the view that reinstatement would, in the first instance, need to be promoted by the DfT for it (WaCC) to consider supporting reinstatement. This view is at odds with Government policy, recently reaffirmed in a Parliamentary Answer, that it is for Local Transport Authorities (of which WaCC is one) and Local Enterprise Partnerships to promote transport schemes in the first instance.

A number of Parish and Town Councils support the reinstatement of the railway; these include Evesham and Chipping Campden Town Councils, and Parish Councils for Mickleton, Pebworth, Honeybourne, Bidford on Avon, Henley in Arden and Aston Cantlow.

A small group of residents who live near to Evesham Place in Stratford upon Avon initially objected to the reinstatement of the line when it was first mooted. Much of the disquiet was dispelled after a report to GRIP 3 standard suggested that the reopened line would need to be tunnelled in the Evesham Place area. There were no objections to reinstating the line at the recent Examination in Public of Stratford District's Core Planning Strategy.

Campaigners are seeking to broaden the appeal of the proposed rail reopening by sharing and promoting to the business community the potential for over 300,000 more visitors a year coming to Stratford upon Avon if it had through rail services and greater rail connectivity.  They are also engaging Members of Parliament and challenging Warwickshire County Council to explain their view so that concerns with the proposed reinstatement can be addressed. The most recent action has involved a direct approach and appeal for a fresh and objective look by CWLEP at the need for a GRIP 4 study.