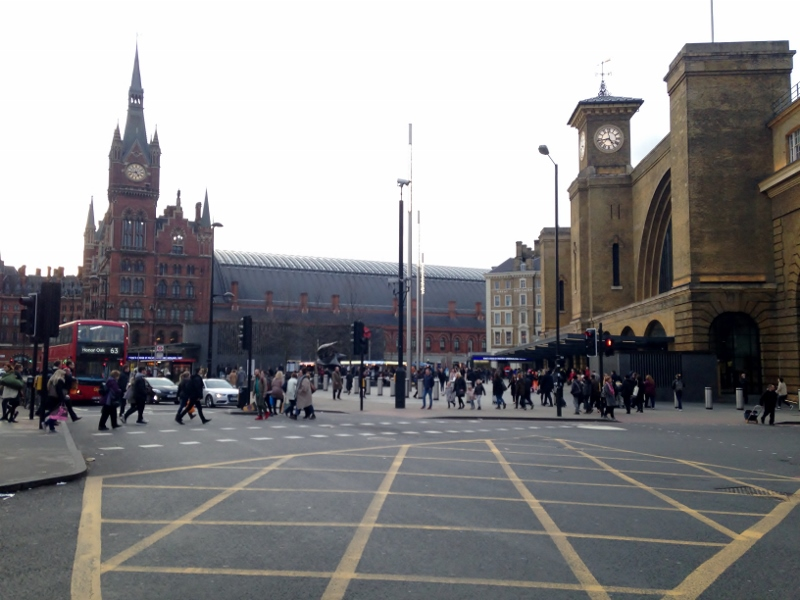 Radical fare changes proposed by the Rail Delivery Group risk reducing choice and flexibility for passengers. What is needed are clearly explained fares which offer choice, not simplistic ticketing which removes flexibility. In London, the adjacent termini of St Pancras and King’s Cross offer alternative routes to Sheffield, giving holders of ‘any permitted route’ tickets the flexibility to choose either.

Railfuture is working with rail companies and consumer groups in the Fares Working Group Forum subgroup organised by the Department of Transport to make fares and tickets clearer for passengers so that they can choose the right ticket for their journey, meeting their needs at the best value fare. We welcome the initiative by the Rail Delivery Group (RDG) to trial changes to the fares system which are intended to make ticket choices easier to understand and give passengers the best possible deal.

What is needed is for passengers to be given clear information – whether they buy the ticket online, by phone, at a ticket machine, or in person at a station - so that they can make the best choice, not for choice and flexibility to be removed in the name of simplification.

The RDG has announced that the following three changes will be trialled ‘to simplify the system’, starting in May, but it is not yet clear exactly what these trial changes will be:

Routeing changes between London and Sheffield

The RDG says ‘Routeing changes will be tested between London and Sheffield where regulations date back to when the direct service was much less frequent and journeys often needed a change of train via a longer route. This means that tickets are required to be available which are not in step with actual options available now.’ This implies that the direct route between London and Sheffield is always the fastest route and that passengers would not want to travel via the alternate route; neither is correct.

For example, if I am travelling from London to Sheffield for a morning meeting but do not arrive at King’s Cross St Pancras underground station until 0630, I know that I will just miss the 0632 departure from St Pancras which arrives Sheffield at 0855. If I have the slightly cheaper East Midlands only ‘via Chesterfield’ ticket, I will have to wait for the next train at 0724. However if I have an ‘any permitted route’ ticket, I have ample time to catch the 0705 from King’s Cross, changing at Doncaster to arrive at Sheffield at 0917, 24 minutes before the next direct train from St Pancras. Perhaps more important, if I am on time arriving at St Pancras but find that the direct train is cancelled, with the ‘any permitted route’ ticket I have the option of the alternative route. I also have the flexibility to go out by one route and return by the other, perhaps breaking the journey on the way.

The ‘any permitted route’ ticket must be retained; the rail companies should explain the benefits of flexibility which it offers in return for its slightly higher price.

‘CrossCountry Trains is obliged currently to price through tickets for very long connecting journeys even where customers can beat that price by combining different types of ticket (so-called ‘split ticketing’). Train companies want to remove these expensive, obsolete through fares which in many cases nobody buys. A best value end-to-end through fare will be offered for test journeys where customers change trains, by offering one price combining the cheapest fare for each leg of the journey.’

It is not yet clear which journeys will be trialled, but Wokingham to Hebden Bridge may well qualify as a possibility. For a weekend journey, the through super off-peak return ticket costs £120.10. The journey requires a change of trains at Reading and Manchester so splitting the journey here and returning the same day gives off-peak return (the super off-peak return is not available) fares of £4.50, £80.00 and £9.80 – a total of £94.30, with a reasonable saving of £25.80. Returning on a different day means that 2 single tickets would be required for the legs at each end of the journey, increasing the cost to £106.60 and reducing the saving to £13.50.

Reducing the through fare to these prices would be welcome, although the fare might have to be slightly higher as the through ticket includes travel on Manchester Metrolink between Manchester Piccadilly and Victoria stations, which the individual tickets do not.

However, limiting the trial to matching fares between points where changes of train (with different operators) are required is only scratching the surface of the savings that can be made by split ticketing. For this journey, returning on the same day, splitting at Banbury, Leamington Spa, Stafford, Stockport and Rochdale produces a total fare of only £74.80, a much more significant saving of £45.30. This still includes the transfer between Piccadilly and Victoria by Metrolink, and there is no need to get off the train at any of these split points.

If Cross Country Trains were really serious about making split ticketing unnecessary, they would trial reducing the anytime Bristol – Birmingham fare of £112.80 to the split ticketing price of £56.70, a saving of almost half!

‘Single-leg pricing will be tested on the London-Glasgow and London-Edinburgh routes so that customers would always know the cheapest fare for their chosen journey, out and back. Despite train companies making online booking easier, finding the best price both ways is made harder because the regulated off-peak fare is a return fare, therefore customers are often left to calculate whether two single tickets are cheaper than a return.’

Single-leg pricing is already offered by Great Western, for example between London and Bristol, but the single costs about 62% of the return. It is sometimes possible to combine an advance single one way and an off-peak single the other way to obtain a lower price than the return ticket, but with the loss of flexibility over choice of train.

It is not clear whether the trial will offer single tickets at 50% of the return or at a premium, like Great Western. It is also worth noting that with a period return ticket, the return journey may be completed on any day during the month following the outward journey, whereas a single ticket is valid only on one nominated day – so it is essential that the return ticket is retained to offer passengers that flexibility, in addition to offering off-peak single tickets.

Rail user help – our guide to help you find the cheapest train tickets in the minefield of the fares system and enjoy your journey.