As the name suggests, the franchise area covers some lines and services in England such as Crewe-Shrewsbury-Hereford and Chester to Manchester. This reflects the franchise area that has been operated since 2003 by Arriva Trains Wales.

The Welsh Government has set up an arm’s length body to undertake the process to procure and manage the franchise: Transport for Wales (TfW). TfW decided to use a procurement process known as competitive dialogue which differs from the more traditional Invitation to Tender process used by the Dept for Transport for franchise awards in England. A disadvantage to outside observers of the competitive dialogue process is that the minimum service levels which are required to be delivered are not publicised at the time of tender invitation although it can be argued that competitive dialogue provides the opportunity for a better value outcome for rail users and the taxpayer as the procurement body has more opportunity and flexibility to negotiate the best outcome.

The Wales and Borders franchise award is in two parts. Firstly, the passenger services in all of Wales and Border areas of England excluding some South Wales local services and, secondly, the core valley lines only of the‘South Wales Metro’, the high frequency shorter distance services in the greater Cardiff area and the some of the adjacent former coal mining valleys.

The reason for this separation is that the Welsh Government wishes to use the franchise award to see a step change in the quality of rail services as part of a properly integrated public transport network in parts of SE Wales. To this end it required franchise bidders to put forward proposals for significant infrastructure improvements as well as better timetabled services. It sought electrification of the busiest routes and the possible use of the latest light rail technology.

The need for major infrastructure work on the local routes north of Cardiff was a reason for the train operators being required to bid with an infrastructure partner. As part of this process, agreement was reached with Westminster Government that Network Rail would relinquish its responsibility for tracks and signalling in the routes running north from Cardiff Queen Street to destinations such as Aberdare, Treherbert, Merthyr Tydfil and Rhymney. The handover will occur in 2019. Approximately 70 route miles will be electrified comprising all of the routes ceded by Network Rail.

The winning bid details comprise an innovative solution to electrification whereby to reduce the costs, electric vehicles with batteries will be used to allow the most expensive sections of track to energise to not be wired. Thus, bridges which would require raising will not have wires below and the one mile Caerphilly tunnel will also be traversed by battery power.

The operation of the metro services will require two specially designed types of rapid transit vehicles. Firstly, on the services from Treherbert, Aberdare and Merthyr to Cardiff Bay, a tram-train with battery option will be sourced from Stadler. These will run on non electrified sections using battery power including 0.5 kilometres beyond the existing Cardiff Bay terminus station to the heart of the Bay leisure district. Secondly, and a UK first, a Stadler tri mode vehicle (electric, battery and diesel) will be built by for the Rhymney to Cardiff Central and Penarth/Barry /Vale of Glamorgan routes. This will be a train as it will operate on lines south west of Cardiff still managed by Network Rail which currently hosts freight services and is used for mainline diversions.

Frequencies on much of the Metro network will double compared to the current timetable. This will not include the Metro areas services which are not to be electrified including the Ebbw Vale and Maesteg branches. Four new stations are envisaged on the network in Cardiff. A new depot will be built near Taffs Well station to maintain the Treherbert/Aberdare/Merthyr trams.

Whilst the changes proposed for Cardiff and the core Valleys are eye catching, in the remainder of the Wales and Borders area is not so fortunate but some changes are proposed which should lead to improved services for passengers especially on Sundays. The principal frequency improvements which appear to exclude routes west of Cardiff are shown on the map below. 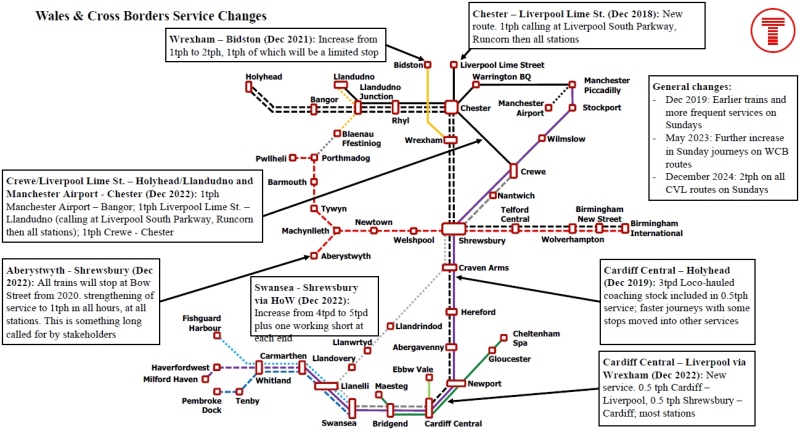 Apart from the improved frequencies on most routes, which will result in 65% more services by 2023 than at present, it is proposed to completely renew the rolling stock. By 2023 95% of services will be provided by new stock with the remainder using units cascaded from other operators. The average age of the stock will fall from 25 years now to 7 years by 2023. A new diesel multiple unit for use on long distance services such as Carmarthen to Manchester and Aberystwyth to Birmingham will be built by CAF at its new factory at Newport, S Wales. Five VivaRail refurbished ex London underground trains converted to diesel will be brought into service in North Wales.

Whilst away from SE Wales only one new station features in the franchise award (Bow Street between Aberystwyth and Borth, approved prior to the franchise award) it is proposed to spend nearly £200 m on a programme of station improvements with every station receiving a boost. The largest schemes include Cardiff Central, to which Keolis Amey is contributing £15m, Chester and Shotton (to improve interchange facilities).

There is much to welcome in the new franchise which meets a number of the objectives set out in ‘On Track for the 21st Century’ the development plan written by Railfuture’s Wales branch. However, with such an ambitious programme of improvements final judgement is reserved until implementation has started to be delivered in accord with the proposed schedule. The lack of involvement of Network Rail in the electrification of the Valleys network will be carefully watched to see whether the work will be completed to budget and on time in view of difficulties encountered with recent electrification work in England. The significant improvement in frequencies on Sundays across the network is something that Railfuture has long called for.

The metro proposals offer little to use the flexibility of trams to access areas away from the existing route network and proposals to integrate rail/tram and bus travel are still vague. However, these are issues that can be addressed in the future and in the meantime let’s celebrate what has the potential to be a historic improvement in rail services in Wales to be rolled out the next five years.

The new franchise and how it was procured will be the main focus of discussion at the Railfuture AGM to be held in Cardiff on Saturday 18 May 2019. Please book early for this interesting and stimulating event.