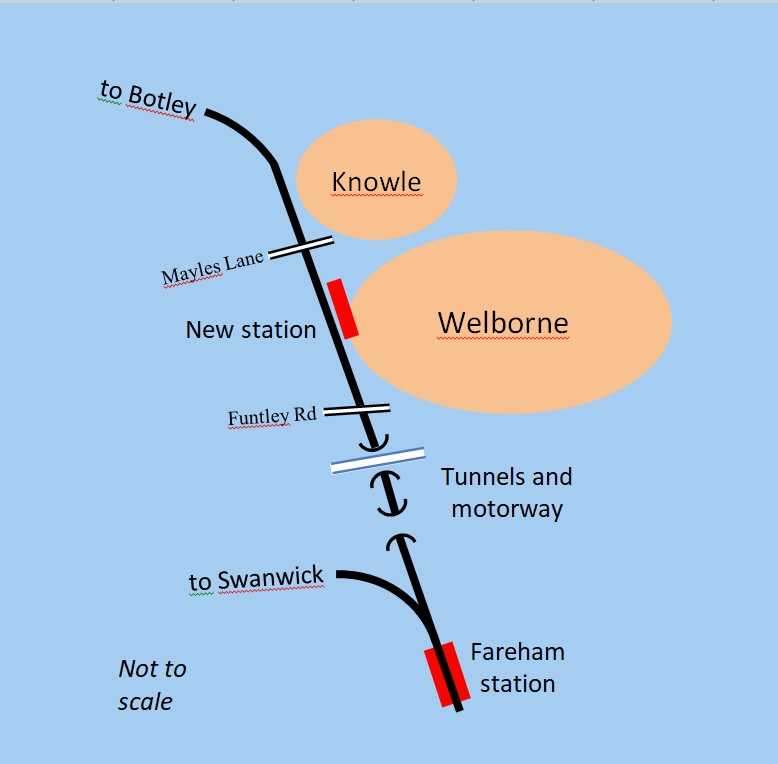 Railfuture Wessex continues to campaign for a railway station at Welborne near Fareham at the site earmarked for 6,000 new homes. A single platform station could be built at Welborne at economical cost on the single track railway line.

Railfuture welcomed Fareham Borough Council’s commissioning of the Welborne Station “PreGRIP” Feasibility Study from Network Rail. This study investigated four options for a station at different sites along the railway line between Fareham and Botley at or near Welborne. For each option, a two phase approach to providing the station was proposed: a Phase 1 single platform station on the existing single track railway line and a two-platform Phase 2 station with the single track railway line converted to double track.

Option 4 in the study is for a station adjoining the Welborne Garden Village site. It is the only site option wholly within the borough of Fareham, so we agree with the Borough Council that a new station for Welborne needs to be based on this option. A station at the Option 4 location would be easily accessible from homes and workplaces in Welborne. It would allow Welborne residents to travel by train to various destinations including Winchester, Eastleigh, Portsmouth, Southampton, and would enable incoming workers to commute by train.

Welborne Station can be built and opened as a single platform station on the line between Fareham and Botley at a base cost of £11 million, as outlined by Option 4 Phase 1 in Network Rail’s Pre-GRIP Feasibility Study. It would be served by the existing hourly off peak and half-hourly peak Portsmouth Harbour to Waterloo service via Eastleigh and Fareham.

We say that the cost of the station can be substantially reduced by taking some of the costs out of the specification in Network Rail’s study, including not having a station building and reducing the platform length from 250 metres to 132 metres (this is the length of the platforms at Botley Station and long enough for a 5-car class 444 train or six carriages of a class 450 train). Selective door opening can be used for longer trains as is already used at several stations on the route of the hourly train between London Waterloo and Portsmouth Harbour via Eastleigh and Fareham, including at all stations between Eastleigh and Portsmouth & Southsea.

After the station has opened, more passenger facilities can be added, the line can be converted to double track and a second platform can be built as outlined by Option 4 Phase 2 in Network Rail’s study. Such improvements to the infrastructure can be added at a later date if and when the money is available … and when there is a proven need to run more train services on the line. It is important to keep the initial cost of building and opening the new station as low as possible to ensure that it is funded, built and opened in time to serve the new residents of Welborne.

Following submission of the developer’s revised planning application at the end of 2018, Railfuture lodged the following additional comment:

“Railfuture welcomes the setting aside of land for the building of a railway station at the Option 4 location identified in Network Rail's Welborne Station Pre-GRIP Feasibility Study.

“In our original submission, we called for the railway station to be built at the start of the Welborne development so that it becomes a sustainable community with good transport links from day one. We also argued that a single platform station with basic facilities to accommodate 5-car trains could be constructed at reasonable cost.

“A conveniently-situated railway station will enable residents to travel to/from neighbouring towns and cities without adding to the pressure on an already congested road network. It is essential that this facility is available early on in the project so that people living in the area do not become wholly dependant on car travel for their daily commute or leisure travel.

“The revised plans still do not appear to include any commitment to actually build a railway station. We strongly advocate that the building of a railway station should be a planning condition placed on the developer of Welborne. Without this, we fear that the railway station would never become a reality.”

For enquiries and offers of help with this campaign, email wessex at railfuture.org.uk