NUCKLE is a package of rail projects to enhance services between Nuneaton, Coventry, Kenilworth, and Leamington Spa. Originally phase 1 was to include provision of new stations at Bermuda Park and Coventry (Ricoh) Arena, a platform extension at Bedworth, (all on the Nuneaton line) and a new bay platform at Coventry itself. Phase 2 includes a new station at Kenilworth on the line to Leamington.

Government funding was secured in 2011 but the whole project has been plagued with problems from Day One. Only one tender was received for signalling works, at three times the anticipated cost, which meant phase one in its entirety was unaffordable. In March 2014 the decision was made to split phase 1 into two parts. At long last Nuckle1.1 is has come to fruition with the opening of the Coventry Arena and Bermuda Park stations on Monday 18th January. The Arena station was physically completed in late summer 2015, but potential safety issues also contributed to the delay. It has only opened with the proviso that it remains closed for one hour after major events – the fear being that the single 75 seater class 153 unit which currently serves the line would be swamped with masses of soccer and rugby fans. (Wasps RFC and Coventry City FC both play home matches there). The current timetable however is still an hourly service, and on the opening day the 'Help Points' were not operational, nor were the ticket machines working. 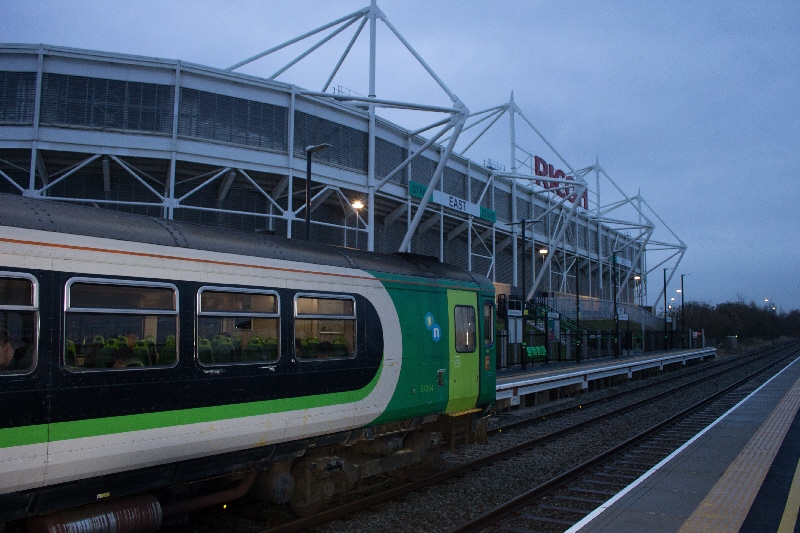 Nuckle 1.2 will now be the building of the bay platform at Coventry, and other associated infrastructure work to accommodate longer, more frequent trains, and a crossover at Arena to enable special event shuttle services. This however will not be completed before the autumn of 2017 at the very earliest. The other major issue preventing completion of phase 1 is the lack of available rolling stock which London Midland flagged up when the original proposals were discussed. With various electrification projects throughout the country being deferred, the cascade of diesel units has also been delayed. It is encouraging, although perhaps surprising, that the Secretary of State has promised ‘suitable rolling stock’ would be made available to ensure the uplift to 2tph - perhaps the Vivarail D-Trains being refurbished right on the doorstep at Long Marston?

Phase 2 of the project has really been overshadowed by the saga of phase 1. The good news is that clearance of the site of the proposed Kenilworth station has taken place, with construction due to commence soon, and completion early in 2017.

However, with no additional rolling stock available for phase 1, the question needs to be asked whether the Kenilworth station opening be deferred until such time as rolling stock can be found to provide a regular service from Leamington to Coventry? Railfuture will be commenting on this in their response to the new West Midlands Rail Franchise consultation document, and calling for a through service between Leamington Spa and Nuneaton.