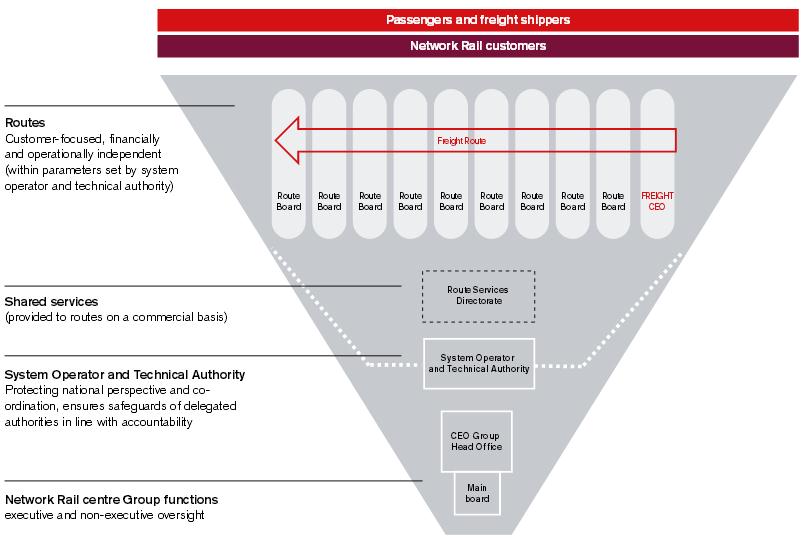 Nicola Shaw CBE, formerly CEO of HS1, was asked by government to produce a report on the future shape and financing of Network Rail. This is Railfuture's response to the Shaw Report, by our Policy Director, Ian Brown CBE BSc FCILT.

Graphic from the Shaw report shows the new shape for Network Rail.

The Scoping Consultation and Railfuture’s response

Prior to the publication of the Shaw report, Railfuture responded to the consultation on the scoping study of the report published in November 2015. Our response was non political but responded specifically to the many questions raised. Railfuture recognises the weaknesses in project management and delivery at Network Rail, the need to bring in further private industry expertise and investment and improve management practices but maintained that a national network is essential. Railfuture also recognises the stress that Network is under in coping with growth and the success of Network Rail in maintaining the highest standards of railway safety of any railway in Europe.

These issues are not addressed by breaking Network Rail up.

This was well received so strengthening Railfuture as a serious stakeholder in the rail industry, a body pursuing its aims of fostering a bigger, better railway in the UK. Railfuture is being listened to as one of the few organisations organised at the national level for such stakeholder consultation but, importantly, can tap into our roots through the branches throughout the country so understanding what issues are of concern and relevant to our members and indeed the users of the rail network.

Nicola Shaw has now published her independent report. Independent means that it is a report to government requested by government and she has based this strictly on the issues addressed in the scoping report including Networks massive and unsustainable debt mountain. In our response we challenged the process of the Regularity Asset Base (the infamous RAB) so loved by accountants as not the way to address the massive investment requirements necessary if current growth can be maintained.

The Report – The future shape and financing of Network Rail

The report was issued in March 2016 and represents a blueprint for growth, not a blueprint for privatisation. There are 7 recommendations interestingly all in areas that Railfuture members have deemed as important and hence included in our formal response to the scoping exercise.
These are the recommendations starting with customers.

Place the needs of passengers and freight shippers at the heart of rail infrastructure management. From a Network Rail viewpoint customers are the train operators. The way advocated here is scorecards where performance and action plans are shared with Network Rail and Network Rail is incentivised to deliver them.

Interestingly and importantly recognition is given to the issue of shared use of the railway and the national network. The importance of the network is recognised from the outset.

This does not major on devolution to local bodies such as Integrated Transport Authorities but does propose deeper route devolution with more autonomy, and flexibility designed to meet the changing and growing needs of customers, within a clear set of rules as policed by the Office of Road and Rail.

Interestingly in this context the report does acknowledge the strategic importance of devolution to bodies such as the recently created regional government body, Transport for the North. This is in the area of funding whilst retaining HS2 as a separate body but only slightly, and disappointedly moves in the direction of better integration with the national network and HS2, so fostering wider regional economic benefits of HS2.

Railfuture has majored on the need to accommodate continued growth in use of the railway. This is interpreted in the report by the need to clarify the government’s role in Network Rail ie what does the government want as funder, client and owner of Network Rail? Of particular note that is in a longer-term context.

The proposal here is to build on recent Network Rail enhancement planning processes such as Route Strategies but with more direct customer involvement but also putting these plans in a wider transport, economic and social context.

The report recognises that financing enhancements needs to be put on a sustainable basis. This involves private sector finance such as using concessions for schemes and involving suppliers in technological innovation and project delivery. Devolution is recognised as a potential source of funds including development gain sharing, techniques well developed in the funding eg light rail schemes and metros worldwide.

Industry wide skill development and improved diversity are seen as key to growing the pool of skilled people necessary to take such a programme forward.

Many respondents to the Scoping Study, including Railfuture, valued Network Rail’s safety record. However the quality of service does not meet expectations and fares are too high and the unit cost of provision of service has not come down with increasing volumes and more experience with projects. Projects including electrification schemes are difficult and take too long to plan and deliver.

The Shaw Report addresses the issues that concern Railfuture members and branches and proposes keeping the network together. This is albeit at the price of more private sector investment and involvement in Network Rail particularly in the enhancement area, where Network Rail is seen as currently weakest. It addresses devolution somewhat suggesting more scope for locally funded enhancements and an organisation more receptive to such initiatives.

The report could have been more prescriptive on regional devolution and on how project delivery could be improved.

However in terms of the remit scope and financing it has delivered a network proposal and in terms of financing suggested a more complex but accountable process of directing funding into projects where investment is needed.

Although Railfuture is generally pleased with the Shaw report set against our remit of a bigger, better railway it is an independent report so far relatively free of party politics.
The issue is now what the government wants to do with it, in particular, have far does the government intend to bring in the private sector to manage enhancements and provide services to Network Rail. The suggestion is incrementally but not too slowly.

Perhaps more concerning is that, whilst retaining the network, there is little in the report to suggest that the government might not resort to selling off particular assets to reduce the debt, such as stations.

It is clear that Railfuture’s advocacy role will need to continue, recognising reality but campaigning on the basis that all change should be to the benefit of passengers and freight customers who are increasingly demanding a bigger better railway.


Scoping Study for the Shaw Report

Railfuture response to the Scoping Study for the Shaw Report

Shaw report: the future shape and financing of Network Rail