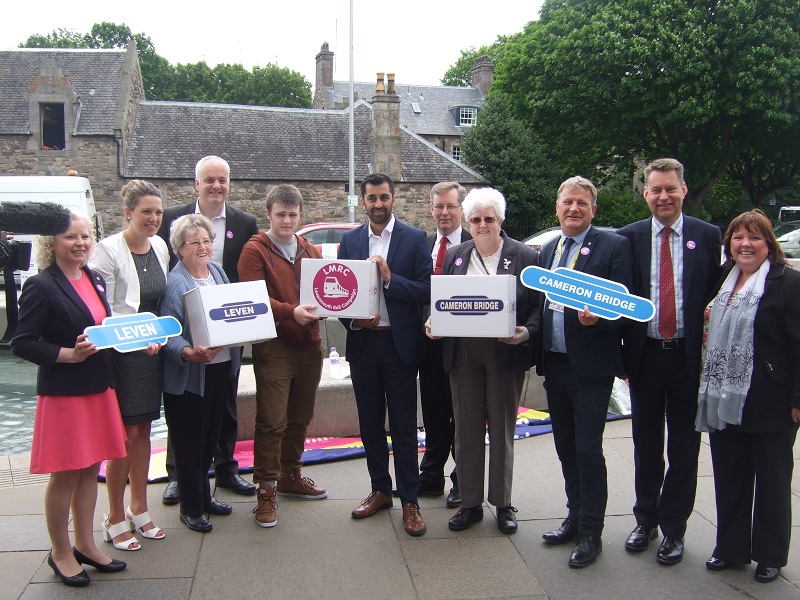 Allen Armstrong, secretary of the Levenmouth Rail Campaign, explains why reopening the Thornton to Leven rail line is essential to improve the life opportunities of the local population. Campaign activists presented a 12,500 signature petition demanding the reinstatement of rail services to Transport Minister Humza Yousaf on 1st June 2017 outside the Scottish parliament, witnessed by MSPs of all parties.

The Levenmouth Rail Campaign is a community-based initiative relaunched in 2014, seeking to reinstate direct rail services between Edinburgh and Leven, with a station at Cameron Bridge. Despite Beeching Report recommendations to retain this line, the 5 mile stretch of line between Thornton on the east coast mainline and Leven on the central Fife Coast was closed in 1969, with freight services ending in 2001. In 2012, the first mile from the junction was reopened for coal freight.

Levenmouth is a small conurbation comprising the contiguous towns of Leven, Methil, Methilhill and Buckhaven and adjoining villages of Kennoway, Windygates, East Wemyss and Largo-Lundin Links. It is by far the largest settlement in Scotland not directly served by rail, with a population of around 38,000 to which a further 9,000 can be included from the adjoining southern East Neuk, plus 5,000 planned expansion.

The trackbed between Thornton and Leven is fully in place, under Network Rail ownership. No Act of Parliament is needed (as was required for the Borders line), nor even any Transport and Works Order. Land is earmarked and available for stations. At present half-hourly Fife Circle services between Edinburgh and Fife stop at Thornton and return. An extension of existing services is entirely feasible.

Reinstatement of rail services to Levenmouth is Fife Council’s stated No 1 transport priority and this features in all county-wide and local plans. The Council have funded three major transport studies since 2006. The latest STAG 2016 report show a positive case (and BCR of 1.31) for reopening rail, a figure likely to be enhanced following the GRIP 3 process. The base cost for reopening the new line for both passenger and freight traffic is estimated at £44 million. The wider business community, through their representative bodies have demonstrated strong support and there is unanimous cross-party support by all elected representatives for the area.

Public support is overwhelming. A petition of 12,500 signatories was presented to the Scottish Transport Minister in June 2017. The local newspaper and regional radio stations continue to give the cause prominence. The campaign continues to be very active with frequent social media updates, monthly meetings, e-bulletins and website, as well as dialogue with decision makers. We can honestly say we have not encountered a single dissenting voice or opposing interest. There is continuing frustration and in some quarters even anger that this area continues to be denied rail access.

Levenmouth now suffers the highest levels of deprivation in Fife (according to 2016 Scottish Index of Multiple Deprivation) and continues to lag behind further over time. This is despite significant private investment in the area by Diageo, and public investment in the Fife Energy Park, new Levenmouth Academy- Campus and others. Since economic growth is concentrated in Edinburgh and south Fife, bringing job, study and leisure opportunities within reasonable commuting time of Levenmouth (compared with the current 2 hour bus journey) is vital in reversing the sub-region’s four decade decline following the closure of the mines.

The Levenmouth Rail Campaign has been successful in pushing Fife Council to fund and lead an updated STAG2 Report, in presenting a petition to the Transport Minister, and in activating cross-party support and renewed commitment. It is negotiating the approvals process which sometimes feels like it is designed to frustrate rather than enable rail enhancements, whilst maintaining local awareness and seeking to mobilise wider support.

The immediate next steps include the production of a professional booklet outlining the case, a members' session in the Scottish Parliament and both local and national awareness and media initiatives, with the aim of converting political support into promotion.