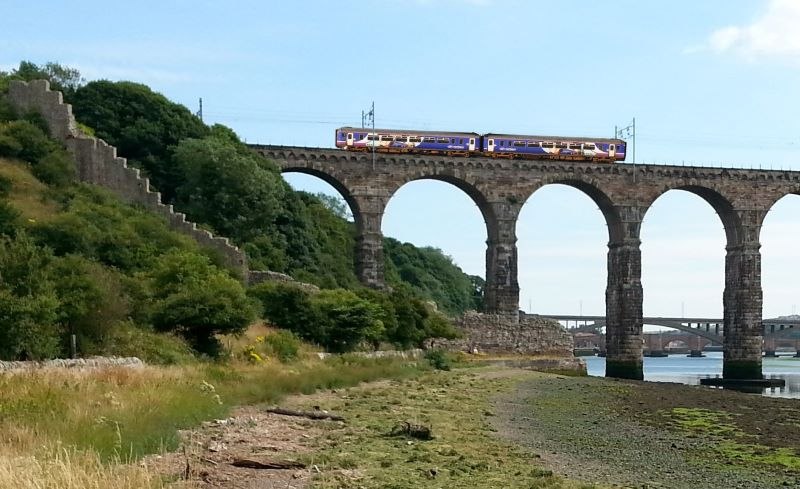 SENRUG, the Railfuture-affiliated rail user group that campaigns for better rail services in South and East Northumberland, has secured funding for a feasibility study which will look at the possibility of running a local rail service between Morpeth and Berwick. Could local trains soon be running over Berwick’s Royal Borders Bridge? Photo (adapted) by Clive Nicholson / Steve Miller.

The group wants to see the existing Newcastle to Morpeth service extended on to Berwick, with an hourly service each way calling at Pegswood, Widdrington, Acklington, Almouth and Chathill, plus the eventual re-opening of the former stations at Belford and Beal, and possibly elsewhere.

However the first step is to establish whether there is enough space on the line for local trains to run, and if not, what would need to be done to make the service possible. The study will also include a high-level market appraisal plus outline indicative costs for the proposed new stations.

Funding for the study is being provided jointly by Northern Railway and Northumberland County Council, with a small contribution from SENRUG. Northern’s award came from their Seed Corn Fund which is available for station adopters and community rail partnerships wishing to pursue ideas for improvements at stations or on routes in their locality, and followed a strong application from SENRUG, which was then matched by the local authority.

Councillor Richard Wearmouth, Cabinet Member for Economy at Northumberland County Council said: “The Council supports the aspiration to see a rail service developed through the north of the county. This has the potential to help revitalise communities and better exploit our tourism and leisure sectors. I know this project is strongly backed by County Councillor colleagues in Berwick, Bamburgh, Alnwick and Warkworth. We are grateful to SENRUG for putting this proposal forward and have been happy to contribute financially to make sure we gather the information needed to identify if this idea can be developed further.”

SYSTRA, an international transport consultancy with over 50 years of experience in the UK, has been selected to manage the study. Project Manager James Jackson said: “We are delighted to have won the contract for this study and look forward to working closely with SENRUG and the other stakeholders over the next couple of months. We will bring our significant experience of feasibility studies and new service appraisal to the project and will build on our experience of a similar project looking at local services between Berwick and Edinburgh”.

Dennis Fancett, Chair of SENRUG confirmed the group had started its “North of Morpeth” campaign back in 2016. “Some people think we are a single campaign group as we are perhaps best known for our efforts in restoring the rail link to Ashington. But that is not all we do. We have also worked tirelessly to secure improved train services at Morpeth and are additionally focussing very hard on Cramlington. This campaign however is designed to help those living north of Morpeth, as well as overcoming the 6-hour gap in the timetable that any Morpeth resident wishing to travel north to Berwick currently faces. Some of the capacity on the East Coast Main Line should be reserved for local services for local people. Whilst this study is just a first step in what could be a very long road towards a service starting, it will provide critical initial information, allowing the authorities to evaluate the next step, and feed in to the next franchise renewal.”

SENRUG’s funding application received letters of support from 10 parish councils or community or station adoption groups along the line as well as from Ann-Marie Trevelyan MP for Berwick. “We are most grateful for Ms Trevelyan’s support and interest and of course to each person or group that took the trouble to write to us” said Dennis. “We hope that, by continuing to work together as a community, we can finally reach the position where north Northumberland has a fit for purpose local rail service. We urge those that support our objectives to add their voice to ours by joining SENRUG” he added. Anyone wishing to know more about SENRUG’s campaign can check out the group’s website at www.senrug.co.uk.


Specification for the Feasibility Study