In February 2020, the Department for Transport (DfT) invited applications for cash payouts from their “Ideas Fund” as part of the Government’s Restoring Your Railway initiative. Railfuture saw this as an excellent opportunity to take forward our campaign to restore a passenger service on the Waterside Line, so our Wessex Branch wrote to Hampshire County Council (HCC) and the local MP, Julian Lewis, urging them to support a bid to the fund.

The line continues to see regular freight traffic, therefore we felt it should be “top of the list” of projects to benefit from the Ideas Fund, particularly as the Government wants to see results from their initiative within the current parliamentary term.

Our members were overjoyed when it was announced that the County Council would act as lead sponsors and put in a bid for funding, effectively reversing their decision of November 2013 to pause any further work on the Waterside Line project.


Best BCR of any line reopening

Railfuture has long campaigned for passenger services to operate over the Waterside Line between Totton and Hythe. We see this project as having the best chance of success of all the possible rail development schemes in our Wessex branch area. Indeed, in 2009 the Association of Train Operating Companies (ATOC, now the Rail Delivery Group) considered the restoration of a passenger service to Hythe as having the best Benefit:Cost ratio of any line reopening scheme in the UK (their Connecting Communities report suggested a benefit:cost ratio of 4.8).

Since the publication of ATOC’s report in 2009, we’ve seen… 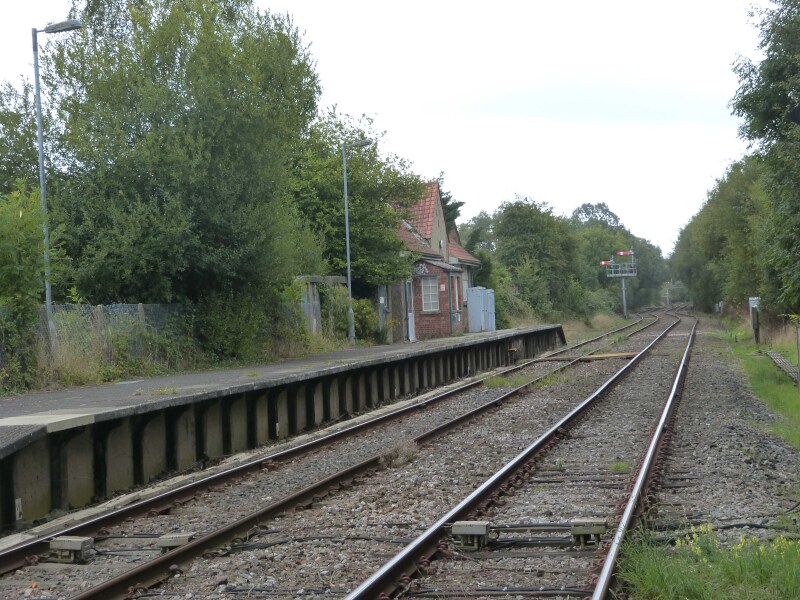 Marchwood station awaits its next passengers. Photo by Stuart George

More recently, there has been a planning application from the Fawley Waterside development company for a huge housing and commercial development on the site of the decommissioned power station at Fawley - this clearly adds further impetus to the Waterside Line campaign.
We’ve also seen the endorsement of parish councils in the area for the reintroduction of a passenger service on the line, not only as a benefit for existing communities but also to offset the anticipated increase in traffic from the new houses and commercial activities on the site of the former power station.

It is heartening to note that Fawley Waterside supports a rail passenger service and proposes a Park and Ride station at the southern end of the branch line, suggesting a journey time of 20 mins into the centre of Southampton. No doubt they recognise a need to mitigate for the traffic increase likely to result from their development (a traffic appraisal predicted an increase in vehicles of around 14% in the coming years). We can therefore expect that a significant contribution will be forthcoming from the developer, which will part fund the infrastructure needed to restore the rail passenger service.

It would be clearly be advantageous at a later date to extend the passenger service to a terminus within the Fawley Waterside development itself. If the trackbed through the oil refinery cannot be used for security reasons, it would be entirely feasible to build a new line around the periphery of the refinery and into the centre of the development, perhaps using a tram-train concept such as that trialled in South Yorkshire.


Progress towards a Solent Metro

In Railfuture, we see the Waterside Line as part of a wider “Solent Metro” transport concept, with cross-city transit services linking Hythe with Eastleigh, Chandler’s Ford and Romsey or with Fareham and Portsmouth. This would be transformational for Waterside residents in terms of access to education and employment. With train paths through Southampton at a premium, the Waterside Line service could be an extension of an existing service such as the Portsmouth-Southampton stopper. 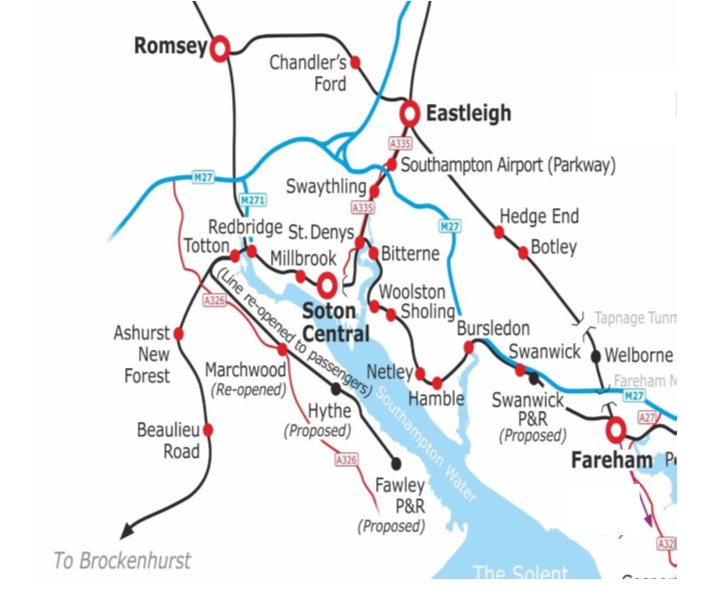 Tourism and leisure activities are, of course, vital to the Waterside area and the proposed Park & Ride station would be an ideal stepping off point for visits to the New Forest, Beaulieu, Exbury Gardens and the Calshot Activity Centre using hired cycles or connecting buses to complete the journey. The Park Authority is keen to promote car-free journeys and the Waterside Line should be part of this strategy.

At a time when the focus for rail investment is on the North of England and HS2, it’s vital that we seize this opportunity provided by the DfT’s new fund to make sure the South gets its fair share of investment.

After decades languishing as a freight-only backwater, the Waterside Line could once again fulfil the purpose for which it was originally designed: to provide passenger services linking with the mainline railway network and to serve as a freight corridor of national strategic importance.

In May 2020, the DfT announced that ten bidders for the first round of the Ideas Fund had been successful in their application for funding to enable them to progress their proposals towards developing a business case.

Railfuture were extremely pleased to learn that one of the ten successful bidders was Hampshire County Council with their proposals for the reinstatement of a passenger service on the Waterside Line.

This means that the DfT will fund 75% of costs up to £50,000 to help HCC finance their transport and economic studies, and to create a business case for the scheme. Further funding to deliver the project will be subject to the outcome of these studies and the strength of the business case.


Special train carries VIPs to Fawley and back

On 28 July 2020, as a mark of their support for the reintroduction of a passenger service, the local train operator South Western Railway (SWR) ran one of their 3-car Class 159 passenger trains from Southampton down the full length of the Waterside Line. On board the diesel special were several VIPs including Rail Minister, Chris Heaton-Harris, the chair of the DfT's Ideas Fund expert panel.

The minister was quoted as saying “… we’ve been absolutely clear that we are determined to reconnect communities and level up infrastructure across the country. Taking steps towards restoring passenger journeys on lines like this demonstrates that commitment. The progress towards developing a business case for this restoration is testament to the energy and enthusiasm of local campaigners, and I share the passion they and other communities have to reopen and restore local lines.”

Also on board were the Managing Director of SWR, Mark Hopwood; the Chairman of Network Rail (NR), Sir Peter Hendy CBE; and local representatives including leading advocate Nick Farthing, Chair of Three Rivers Community Rail Partnership and Cllr Rob Humby, the Deputy Leader of Hampshire County Council, which submitted the winning bid. Cllr Humby remarked: “…we now look forward to working with the DfT, NR and stakeholders to review the evidence and undertake a business case for re-introducing passenger rail services on the Waterside Line.”