New Railway from Ferryhill to Pelaw (a.k.a the Leamside Line).

Latest News (April 2020): Paul Howell, the recently elected Conservative MP for Sedgefield, asked to meet with the North East Branch of Railfuture. He was particularly in interested to get our views on the Government’s willingness to consider some reopening of rail lines originally closed under the 1963 Beeching Plan including the Leamside route from Ferryhill to Pelaw. He wanted to acquaint himself with some contemporary railway information so that he would be in a position to “bang the appropriate drum” at Westminster on behalf of the NE.
Addressing the particular interest in the Leamside line our representatives, Keith Simpson and Tony Walker, pointed out that in 1999, Railtrack had decided to press ahead with a reinstatement scheme for Leamside on the grounds that additional capacity was required to both create more space on the ECML by diverting freight trains from it, and in order to make provision for development of local passenger service links between Middlesbrough, Ferryhill, Belmont (Durham), Washington, Heworth (Metro Interchange) and Newcastle. Durham County Council was engaged as a co-partner in this proposed reopening and given responsibility for developing a parkway station at Belmont and (possibly) a station at Ferryhill. Preliminary clearance and new fencing work got under way during 2000. The following year Railtrack was declared insolvent and reverted to Government control under the name Network Rail. The proposed Leamside scheme was discontinued and the line left to decay.
We emphasized the importance of developing an enhanced local passenger network linking key settlements, especially Washington, population close to 60,000. Also, Leamside still had enormous potential in terms of its diversionary capability from ECML, particularly in event of any operational mishap on that line or, importantly, in event of any major structural failures between Ferryhill and Newcastle.

What Railfuture want to see. Railfuture North East want to see the line from Ferryhill to Pelaw re-opened and used for:
The 21 mile line would also free up capacity on the ECML, by providing an alternative freight route, and an emergency diversionary facility. This re-opening, coupled with making use of the Stillington line for passenger traffic would also provide the option of a new local rail services, typically York to Newcastle via Leamside or Middlesbrough to Newcastle via Stillington. The package could be completed by opening a station at Ferryhill which would offer connections to a wide range of destinations so opening up new employment and social opportunities to people living in this part of the former Durham Coalfield. 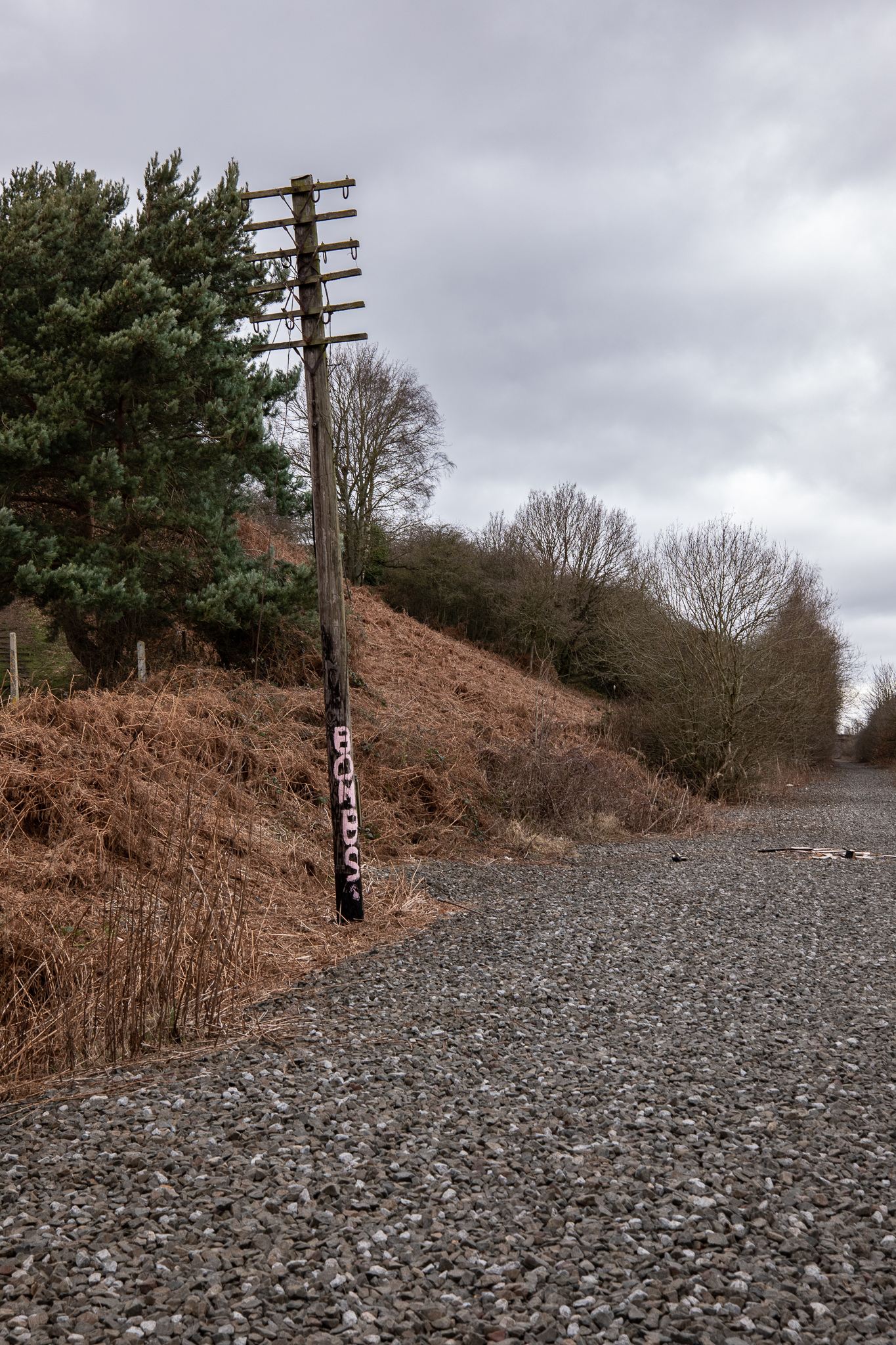 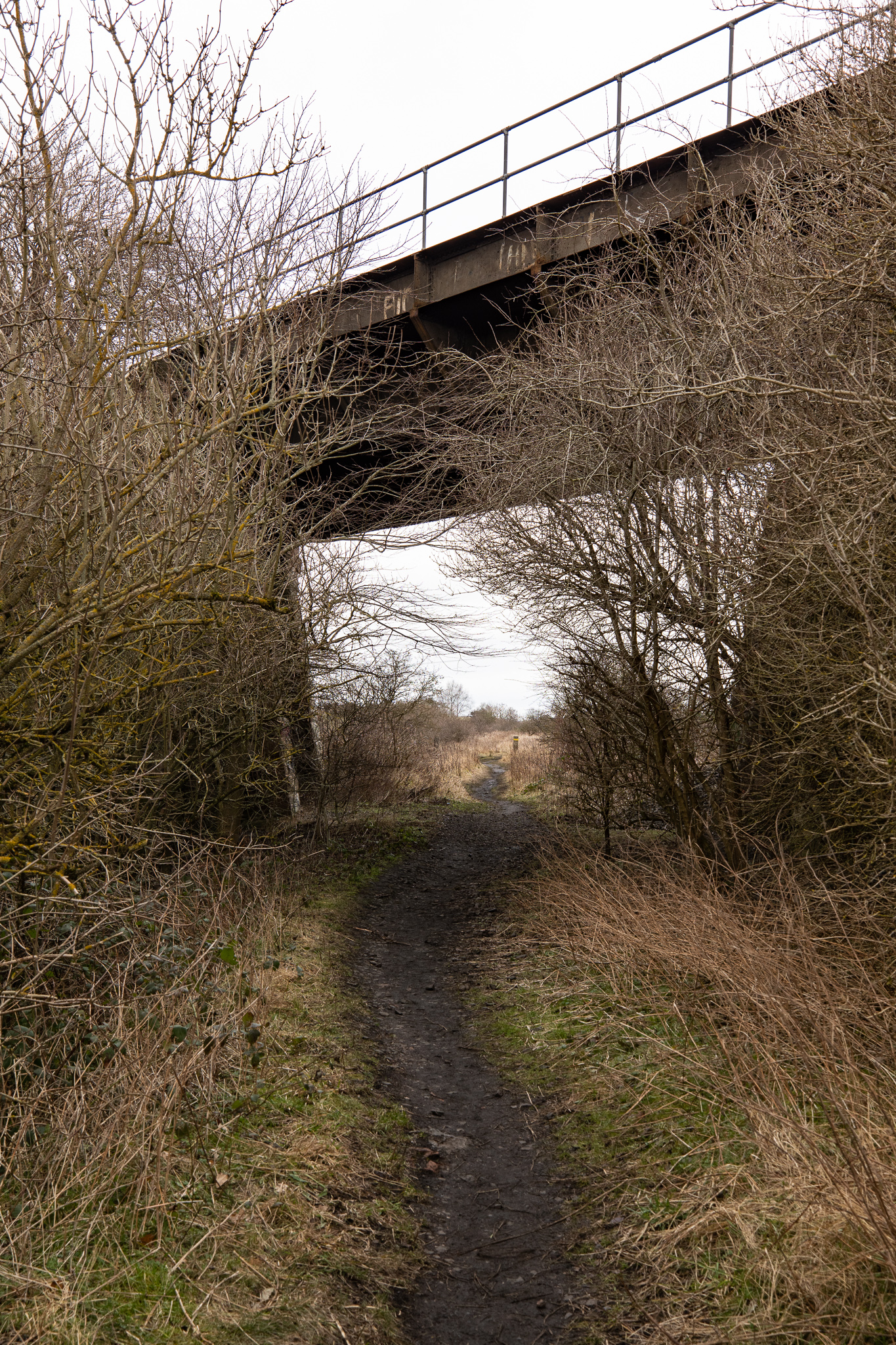 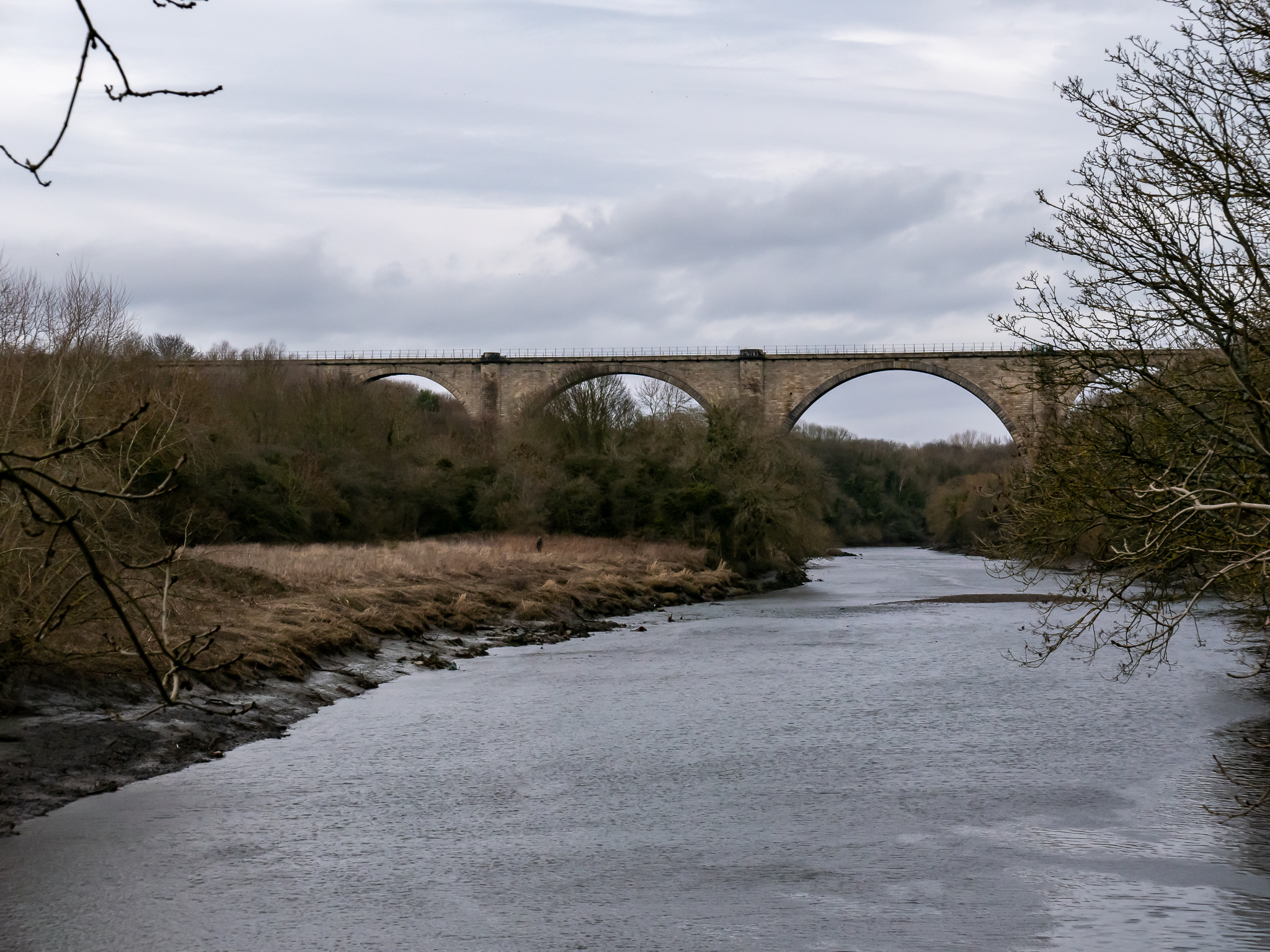 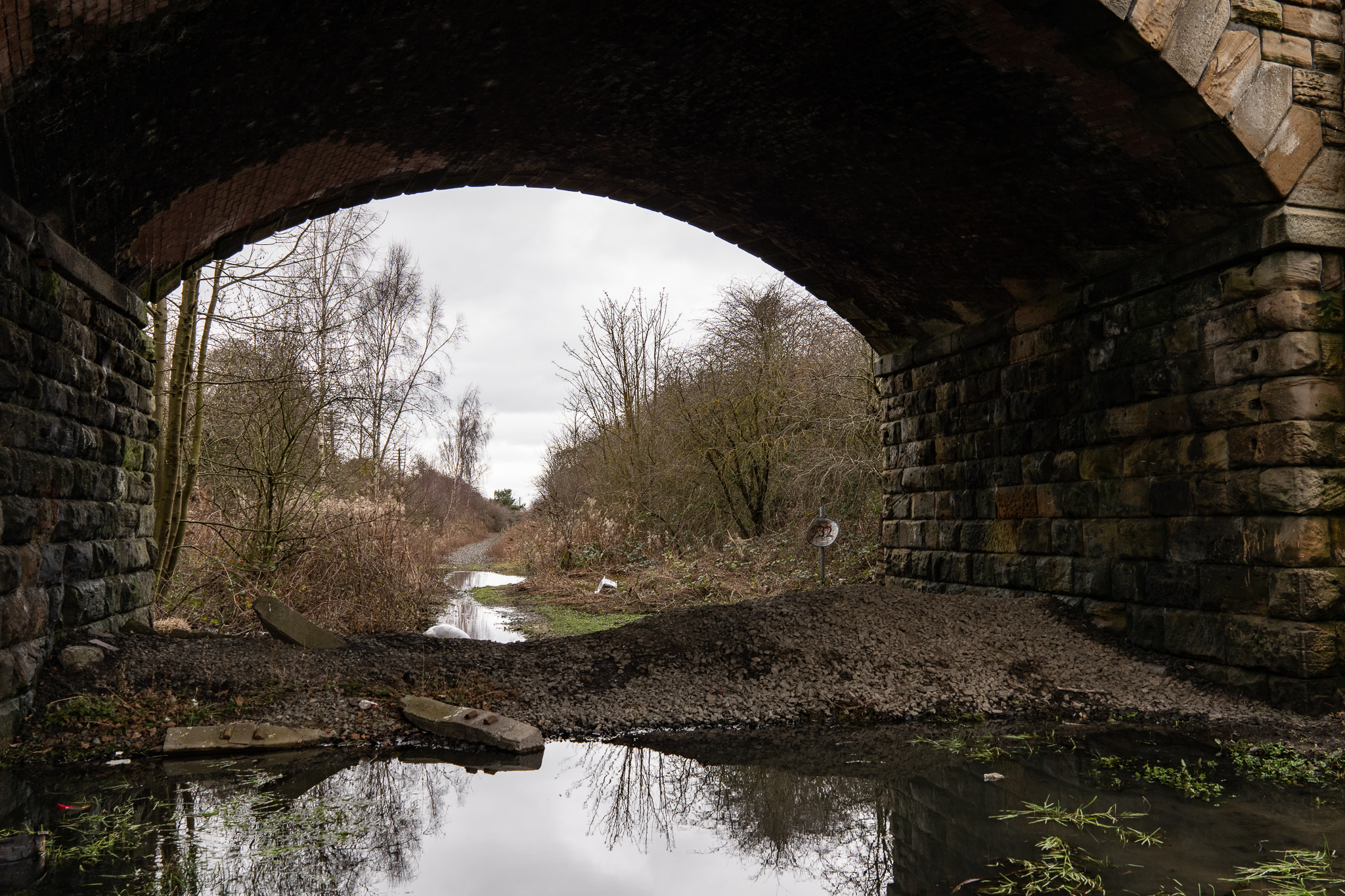 The track has been lifted but the alignment is still in place and protected from development (but see below).

History
Passenger services on the south end of the Leamside line were withdrawn in 1941 leaving only 2 stations open. Their services were effectively withdrawn in 1963 with the final closure to passengers in 1964. The line remained open for coal traffic, and use as a diversionary route, until 1991 when BR designated the line as superfluous to need following electrification of the ECML. At the height of its operations the line had stations at Usworth; Washington; Penshaw; Fencehouses; Leamside; Sherburn; and Shincliffe.

Strategic Support
On 19th July 2016, the North East Combined Authority (NECA) approved ambitious plans to create a joined-up rail and Metro network. The strategy identifies a network of disused or under-used rail routes across the region which could benefit from new or better services. NECA says it can connect Belmont in Durham with Fencehouses, Penshaw, Sunderland, South Hylton (via a 3-mile extension of the Tyne and Wear Metro), Washington, Pelaw, South Shields, again by using connections with the Tyne and Wear Metro, and Newcastle. Despite the split of NECA into two separate authorities it appears that the new Joint Transport Committee, formed from representatives from both authorities, is still supportive of the plan. Whilst we haven’t been able to find anything definitive in terms of support for Leamside from Transport for the North (TfN), beyond their support for improvements to the ECML, we did find, on the NEXUS website dating from January 2018 and in the context of the publication of the TfN Strategic Transport Plan, the following: “Whilst a full list of the improvements which will be needed has not yet been published, emerging priorities for the North East include upgrading strategic highway links to the rest of the North and to Scotland, Northumberland to Newcastle rail connections, the Leamside Line and Durham Coast Line and improved access to Newcastle International Airport. These are in addition to the baseline investment assumptions set out within the plan”.

Local support
Durham County Council Cabinet received, and approved, a report in July 2018 that called for them to “continue to lobby for investment in the East Coast Mainline to improve capacity and resilience, including supporting the option of re-opening the Leamside Line”. Stuart Timmis, Durham County Council Head of Planning, was quoted on 17th October 2019 as saying, in response to questions about future extensions to the Metro System to Washington, Seaham and Ferryhill: “We, as a council, couldn’t say we will extend the line because it is outside our remit, but we’ve protected the Leamside Line, which is that link into Ferryhill. South Tyneside Council in their Strategic Transport Update (March 2018) refer to their “working with NEXUS to establish route extensions including IAMP" (The International Advanced Manufacturing Park or IAMP is a joint venture between Sunderland and South Tyneside Councils). The IAMP development is expected to be located in the area north of Sunderland's Nissan car plant close to the A19(T).] links using the Leamside Line and South Shields to Sunderland extension”. In May 2019 Bridget Phillipson (MP for Houghton and Sunderland South) called for, as part of a submission to a Government consultation on light rail which was considering the case for expanding services like the Tyne and Wear Metro, extending the Metro to Doxford Park, Penshaw and Fencehouses. This would be achieved, in part, by forming a loop line with the Sunderland Metro extension, which runs on the track bed of the former line from Sunderland to Durham as far as South Hylton. The disused track bed continues from South Hylton to a junction with the Leamside line. Although the historical junction only allowed trains to merge onto the Leamside line in a southerly direction, space is available to create a short section joining the two tracks in the other direction. Using the current Metro stock on this further extension would require the use of 1,500 v overhead line all the way round the new loop from South Hylton to Pelaw where a junction could be made with the current Metro Line. This solution poses its own problems in that it would rule out electrifying the whole of the Leamside line to mainline standards and, in any case, providing any sort of OHL adds to the cost of this Metro extension. But there might be a way round these problems. The Newcastle Evening Chronicle (5 February 2020) reports that, because the new Metro Cars will have the ability to run on batteries as well as on the overhead line that it will be “dramatically cheaper and easier to open new routes”. They go on to quote Metro development director Neil Blagburn as saying that this new capacity would allow for a new loop extending out from South Hylton, through Washington and connecting back to Pelaw. Each train battery will be capable of being upgraded so that it can run for 16km without costly overhead lines, potentially even more as technology improves. He points out that the more you can reduce the costs, the more it improves your cost-benefit ratio.
So far so good but there are still threats to some parts of the line. The issue of the alignment being protected is not entirely simple – in part because 3 separate planning authorities are involved. BBC news (19 July 2019) reported that proposals for a “monster incinerator” planned to be sited at Usworth, near to the Nissan car plant, which would could rule out using the site of former Usworth Station as a Metro Station. The City Planning Department was recommending a “green light” for the scheme but the Planning Committee disagreed and refused the application. As of July 2019, the company involved were reported as “reviewing all available options”.

Help from Central Government?
The other big, and potentially good, development is the recent announcement of a £500m fund to re-open, or at least investigate the re-opening of lines closed by Beeching, with the Transport Secretary, Grant Shapps, being quoted as saying “I have to say I am also supportive of the reopening of a lot of these smaller lines closed under the Beeching cuts … and I would like to see how we can get as many of these re-opened as possible.” Will this line be considered and is £500m enough? Only time will tell.
Updated February 2020