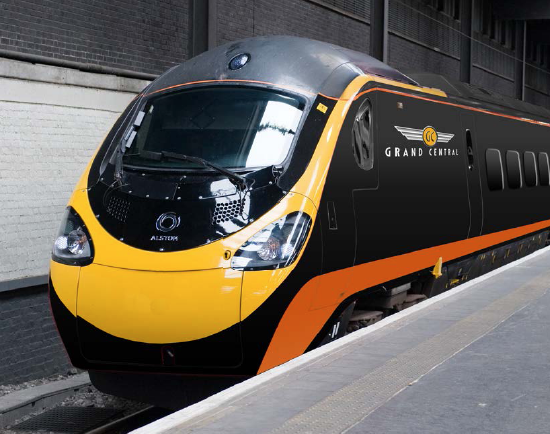 A Pendolino train as it would look in the livery of Grand Central. This image was issued by Alliance Rail in April. The Blackpool service will be branded Great North Western.
Blackpool will get direct inter-city rail services from London in three years time.

The news came last week – more than 10 years after Virgin Trains dropped the town as an inter-city destination. It does, however, run one return train on a weekday, leaving Blackpool at 05.25.

The new off-peak service will be provided by Great North Western Railways which is a subsidiary of Arriva, itself owned by Germany’s national rail company Deutsche Bahn.

GNWR was approved by the Office of Rail and Road as an “open access” operator on the West Coast main line where franchised inter-city services are run by Virgin Trains.

Six GNWR trains will run between Queen’s Park, London, and Blackpool North on Mondays to Saturdays, with five trains on a Sunday. They will stop at Poulton-le-Fylde as well as Kirkham & Wesham.

“ORR recognises the benefits competition between train operators can bring to passengers and welcomes applications for new train services where they meet required criteria and provide real benefits for rail users,” said the ORR’s John Larkinson.

GNWR will run a new fleet of six-coach tilting trains to service the route.

Arriva has spent more than four years trying to persuade the ORR to allow it to launch direct services to Blackpool.

Ian Yeowart, who organised the Great North Western bid, said he was delighted with the decision.

It also wants to run services from London King’s Cross to Newcastle and Edinburgh.