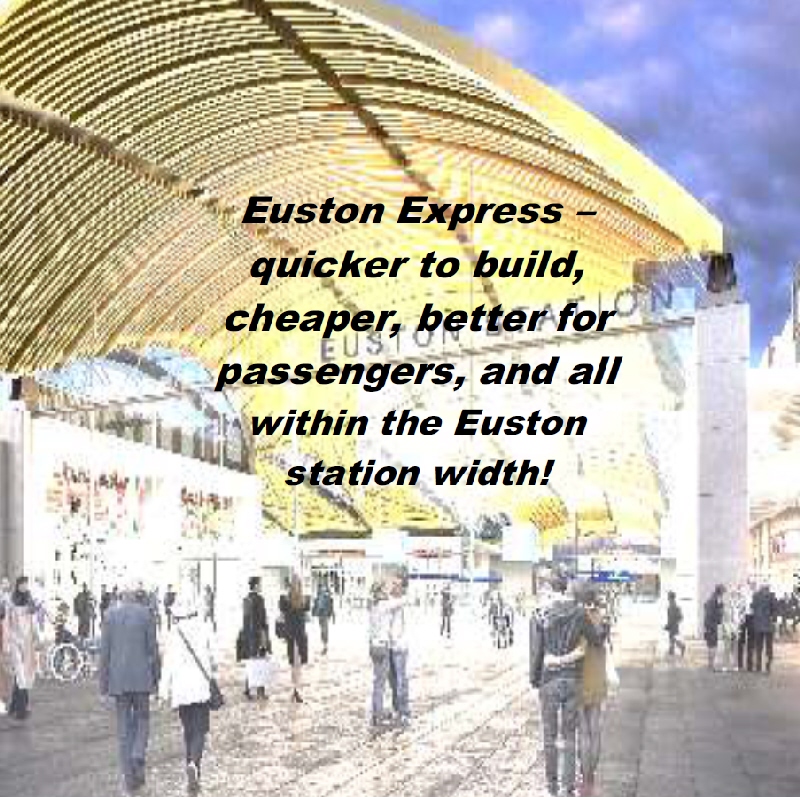 HS2 Limited have recently published their fourth attempt at a plan for Euston station, with an increased cost, massive property demolition and more disruption over a longer timescale. However there is an alternative - Euston Express would provide the necessary capacity sooner whilst costing £1.5Bn to £2Bn less and avoiding significant disruption. (Image DfT.)

The latest HS2 Limited proposal envisages building the new HS2 platforms to the west of the existing Euston terminus, requiring the demolition of the residential and commercial properties in that area. The development will be phased, so disruption will last longer, and the cost has increased by £0.5Bn to £2.5Bn.

The Euston Express concept devised by Jonathan Roberts Consulting and promoted by Lord Berkeley is a robust, incremental, lower cost and lower impact scheme which will stay within the existing station width. It therefore avoids the environmentally damaging and costly new construction in a sensitive city environment of the HS2 Ltd scheme. It follows the example used by high speed lines in France and Germany which generally use their classic lines, sometimes upgraded, for the last 5 or 10 km into city termini.

The key to the scheme is to free up capacity on the six-track approach from Queens Park and at the Euston terminus by diverting many WCML suburban services on to Crossrail. Two short HS2 tunnels would be built east from Old Oak Common, to surface within 2 miles onto the West Coast Main Line formation near Queens Park station. From Queens Park, the remaining WCML suburban services to Euston would be combined with the DC services from Watford on the existing DC Lines, and the WCML fast services would use the existing slow lines, leaving the existing fast lines available for HS2 services.

Crucially, the existing station width footprint can accommodate the forecast number of trains from both HS2 and WCML, with some additional platforms created if necessary where existing platforms are very wide. Some platforms would be lengthened to the south to accommodate 400m HS2 trains. A deck above the station platforms would provide access and exits from trains and the station amenities for all train services there (WCML and HS2) as well as improved access to Underground, Crossrail 2, bus, taxi, cycles and the street.

The Euston Express team has analysed forecasts and data from both HS2 Ltd. and Network Rail about future growth in demand and the number of trains required up to 2040 and beyond. Interestingly, the growth in commuter traffic and actual passenger numbers may well be greater than those of HS2, but the six tracks and 18 to 22 platforms available when Euston Express is complete can cope with these numbers within the width of the station footprint.

Euston Express could achieve a further cost saving by using only UK gauge trains, called classic compatible, which can run virtually anywhere on the UK network as well as on HS2 at high speed. There is no cost, capacity or performance benefit in the proposal to purchase a separate number of ‘European gauge’ trains which, for Phase 1, could only operate between Euston and Birmingham; purchasing two types would incur extra development costs. Using classic compatible trains enables HS2 to operate on the last four miles of the West Coast Main Line into Euston without new or expanded tunnels.

In the longer term, when HS2 has been extended to the North and Scotland, and there is an identified need to connect to HS1 to provide through services to the South East and the continent, the construction of European gauge trains could be justified. These could be double deck as the TGV Duplex. At that stage, a new east-west connection to HS1 could be built - to European (GC) gauge - with one or more stations in the London area. To achieve a reasonable business case, it would have to carry domestic Thameslink-type services as well. Euston Express propose that passive provision be made for such a link within the tunnels between Old Oak common and Queens Park.

The Euston Express proposal would benefit passengers and the community by reducing the scale and duration of disruption since many of the existing platforms would be unchanged. Construction of a deck above stations has been done successfully at other stations, including London Victoria Brighton lines, whilst retaining train operation below. At Euston a deck already exists, but has not been used since parcels traffic stopped. Extending platforms southwards to take longer HS2 trains can similarly be done whilst other parts of the platforms are in use. On the other hand, HS2 estimate that for their proposal there will be the need for 650 lorry movements a day in and the same out over several years just for spoil removal, with parking for them planned to be near London Zoo. It is unreasonable to expect any urban community to permit this to happen when an alternative scheme that works can be done with minimal intrusion by using the existing railway tracks with permanent works confined within the railway ownership boundaries.

Euston Express is a project designed to create a station terminus that works for the community and passengers, by integrating the HS2 services with those of the West Coast Main Line, giving passengers one station with services and access to Underground, bus, taxis and cycles integrated, including provision for interchange with Crossrail 2. There would be retail opportunities on the deck above the tracks and elsewhere. There would also be opportunities for office or housing development above the site to help fund the development, but the extent to which this is permitted is an issue for the local authorities.

The proposal has been sent to ministers, HS2 and other interested parties, urging them to consider it seriously and enter into detailed discussion on how it can be implemented.

Extension of Crossrail services on to WCML suburban lines