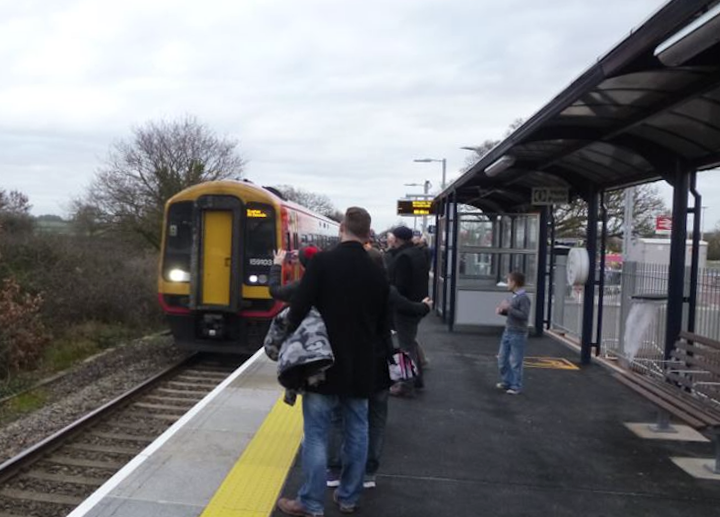 Passengers meet the first train to call at Cranbrook station yesterday Picture by Chris Austin
A £5 million railway station opened yesterday at Cranbrook to serve “a new eco-community” in Devon.

The station, funded by Devon County Council and Cranbrook New Community Partners, serves almost 3,000 residents which will increase to 8,000 over the next 10 years.

"There is now a wide range of sustainable travel options for Cranbrook residents and the opening of the train station means another very welcome green travel option is available,” said Councillor Paul Diviani, leader of East Devon District Council.

Cranbrook town is powered by an energy plant which will eventually run on sustainable wood fuel, and residents are encouraged to use public transport.

But Friends of the Earth in Exeter has criticised the rural development, claiming that residents will continue to travel to work by car.

Cranbrook Town Council celebrated the opening of the station with hot food and drink and a performance by the Maynard School band. The station was also decorated with bunting and Santa was spotted boarding the train.

The first train was westbound for Pinhoe, Exeter Central and Exeter St David’s where passengers can change for London Paddington.

Cranbrook town councillor Kevin Blakey said: “The station is hugely welcome and will make travelling much simpler for a lot of people. It takes only nine minutes to get to Exeter Central so it will be ideal for residents, who can get to the city centre in no time.

“It will also connect to Waterloo and allow people to travel up North by getting off at St David’s. It is a very important milestone.”

The single-platform station can accommodate six-car trains and there is a car park with 150 spaces. But the line through Cranbrook is single track and needs doubling to allow for more frequent services.

Rail campaigners say that if the train service at neighbouring Pinhoe station was improved, expensive and damaging road expansion would not be needed. Large-scale housing development is proposed for Pinhoe, including the redevelopment of a clay pit and a former brick works. There is already extensive high-density housing in the area.