It is a commonly held belief that the railways are heavily subsidised but the facts tell a different story. For example, how many people know that train operating companies (TOCs) pay more in premium payments to government than they receive in subsidies? This is because every year subsidies to TOCs have been going down whilst premium payments have been increasing.

Figures released by the ORR show that in the last financial year (2014/15), 11 TOCs paid a total of £1,529million in premium payments but subsidy received by 8 TOCs amounted to £727m, leaving government with a net surplus of £802m.

This is a very significant development as it effectively reduces the overall costs of the industry by nearly £1bn and it is the fifth successive year where premiums have exceeded TOC subsidies.

For those interested in the figures, here is a brief summary: Note that the subsidy figure includes PTE support and cap & collar revenue support. The biggest beneficiaries of subsidy were Scotrail (£261m), Northern (£113m), Arriva Trains Wales (£102m) and Merseyrail (£86.2m).

But this is not all, recent research by economic consultants Oxera, found that the rail industry as a whole pay about £3.9bn in taxes which more or less cancels out the annual Network Rail grant from government. Total government support for the rail industry in 2014/15 amounted to £4.796bn while money paid back to government amounted to £1.5bn from the TOCs plus £3.9bn from taxation bringing the total to £5.4bn, apparently yielding a surplus of about £600m for the government and tax payer. This year the subsidy will rise to over £5bn but this will include investment in Crossrail. 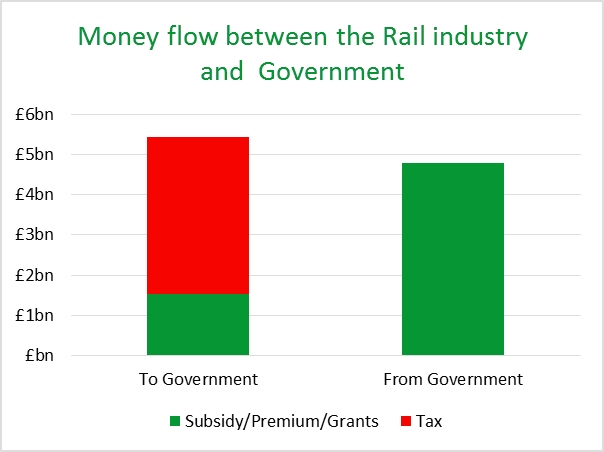 On this last point it is often difficult to distinguish the difference between “subsidy” and “investment” as government funding for rail enhancements is usually seen as a subsidy and the Crossrail project is an example of this even though the city of London and the national economy will be major beneficiaries. By contrast, road building is seen by government as investment - remember “roads to prosperity” in the 1980`s, a policy which was subsequently shown to be flawed as without demand management to control traffic growth congestion would simply get worse.