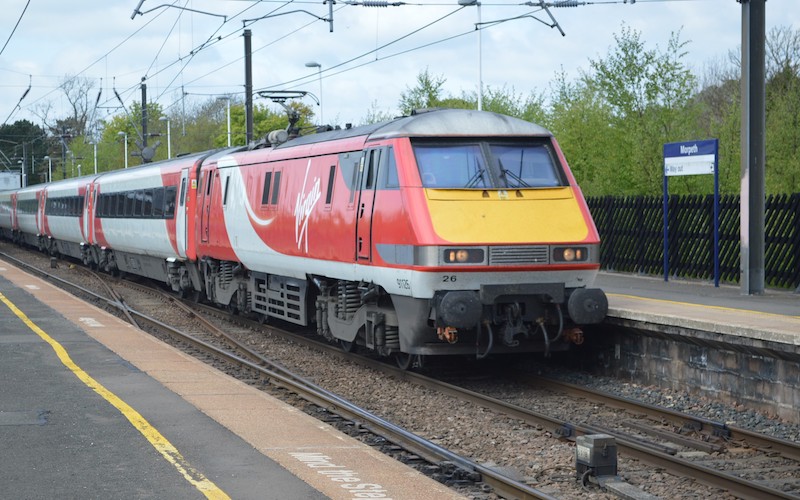 A Virgin inter-city train at Morpeth Picture by Geoff Stainthorpe
People living near Morpeth are getting an early Christmas present on Sunday (11 December 2016) when 26 extra inter-city trains a week start calling at the station.

It is a proud moment for the South East Northumberland Rail Users Group which has been campaigning for better services.

There are also new weekend services, with later departures from Edinburgh to Morpeth on Friday and Saturday nights, and two extra services each way on Sundays, including a morning departure from Morpeth at 09.00 to Edinburgh.

“We are delighted to welcome these new services,” said Dennis Fancett of SENRUG. “It will now be possible to catch a direct train from London to Morpeth on weekday mornings, and additionally we will have off-peak Virgin trains between Morpeth and both London and Edinburgh.

“We have been in negotiations with Virgin for some time, articulating the business case of Morpeth, and are pleased our arguments have been listened to.”

Virgin Trains’ Claire Ansley said: "We will have 26 new departures from Morpeth per week, which we think is great news for customers.

"SENRUG has very much helped shape many of our improvements for Morpeth and I would like to thank them for their continued support and commitment to working with Virgin Trains.

"These additional services are being introduced just over 18 months before we launch our new Virgin Azuma trains, which will significantly improve the speed, comfort and frequency of services on the route.”

He will outline Virgin’s future plans and passengers will put questions or give feedback to Neil about any aspect of the company’s operation. The meeting starts at 19.30. All are welcome.

SENRUG continues to lobby for better train services in south-east Northumberland and urges those who support its campaigns to join the group.

“The more people we speak for, the louder our voice is heard,” said Dennis.