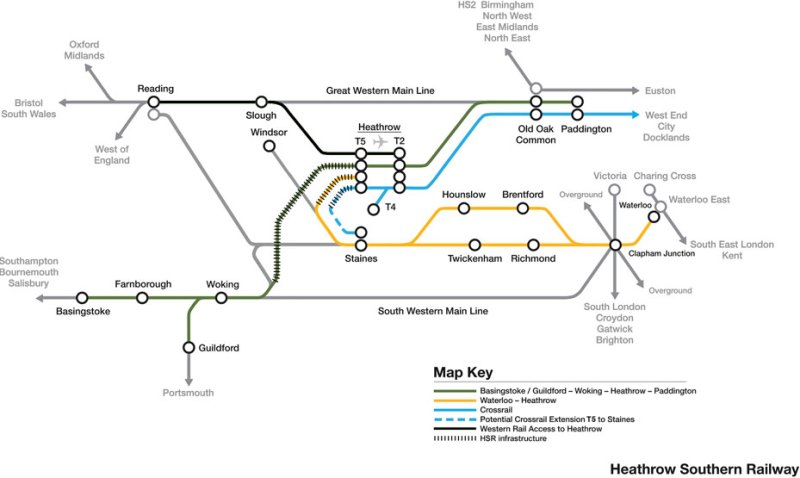 The DfT’s ‘Call for ideas’ set a deadline of 31st July 2018 for initial proposals to be submitted. Its guidance to promoters then sets out four priorities for proposals:
For each priority, there are key criteria to be met. For proposals which reduce congestion, the scheme must integrate with the existing network to the satisfaction of Network Rail and promoters must compensate for adverse impacts on existing services. For proposals which provide new journey opportunities, promoters must show that it will create wider economic opportunities eg housing and employment growth, and that there is local demand, ie it is supported by the local community.

Market Led Proposals must have a business case showing that they are fully financed and that their finance, operation and maintenance costs will be fully funded from revenue. Where proposals require government support, for example through changes to train company franchise contracts or usage guarantees, a WebTAG business case must also be provided.

Proposals will have to pass though six approval stages:
This process places so many hurdles in the way, all at the promoters financial risk, that very few investors will be prepared to accept that risk – see evidence submitted to Transport Select Committee. In particular, a different supplier can pinch the scheme from the original promoter at the Pre-Deliver stage. If the process is not streamlined, the government’s initiative to bring private finance into the railways is likely to fail. In reality there are only three decisions that the government need to make, so there should only be three approval stages in the process:
Potential routes for which Market Led Proposals may be submitted include Southern Rail Access to Heathrow and a route from Stratford through Docklands to Gatwick and Brighton.

The simultaneous announcement by Transport Secretary Chris Grayling that private companies had been asked to come forward with ideas for a southern rail link to Heathrow puts this in pole position for implementation as a market led proposal, although because it was a separate announcement there is some doubt as to whether it will follow exactly the process outlined above.

There are four or five possible proposals, including Heathrow Southern Railway which proposes a new line in tunnel between Heathrow and Virginia Water or Chertsey, Windsor Link Railway which will link the lines at Windsor, a route through Bedfont proposed by Hounslow Borough Council, and a light rail route linking Heathrow to Staines. There may also be a ‘disruptive technology’ solution, but what that might be is unclear! The Windsor Link and Bedfont proposals would be partly funded from property development; the Heathrow Southern Railway proposal would be funded from traffic.

Railfuture considers that the chosen solution must provide direct travel between Heathrow and Hampshire and Surrey as well as south west London, must support connections with the rest of the area south of the Thames, must not increase the number of trains across the level crossings near Staines and Egham, and must not compromise existing services on the Reading and Windsor lines. Only the Heathrow Southern Railway proposal meets these criteria; it also provides a new route from Guildford and Woking to Paddington via Heathrow, by extending the existing Heathrow Express services which will otherwise become underused with the advent of Crossrail at Heathrow. It therefore meets the priorities of reducing congestion, increasing benefits of existing programmes (Heathrow third runway – although southern rail access is still required without the runway) and new journey opportunities.

This privately-funded consortium is proposing a new route from Stratford through Docklands to East Croydon, in line with our Thameslink 2 concept, and via Uckfield to Brighton. The primary objective is to improve access to Canary Wharf and to link it with Gatwick Airport, meeting the priorities of reducing congestion and providing new journey opportunities. Much work has been undertaken in respect of the pre-feasibility study (the funding was significantly more than for the London and South Coast Rail Corridor Study and at a more appropriate level for a potential Crossrail 3). LSCR is working with consultants to finalise the summary report. This pre-feasibility stage should be complete later this year and will include the required mechanisms to deliver an acceptable level of benefits for both promoters and stakeholders.

In addition to the new cross London tunnel (the really expensive part) the plans include an upgrade of the route between East Croydon and Brighton via Uckfield and Lewes, including redoubling and electrification, to create an additional route to Brighton. It also includes sympathetic reinstatement of the Tunbridge Wells West station.

The London and South Coast Rail Corridor Study showed that to make a business case for reopening Uckfield – Lewes, the route must support local economic growth. Brighton needs 30,000 new homes by 2030 to support its economic growth, but only 13,000 of these can be accommodated within the city. Therefore Railfuture are exploring with local authorities in the area whether planned development could be sited in areas where it can be served by a reopened route, so that those areas can share in Brighton’s prosperity and a viable business case for reopening can be established, either as part of the consortium’s proposal for a double track electrified route or as a minimal single track reinstatement.

DfT invitation for investors to invest in rail infrastructure

DfT call for ideas for southern rail access to Heathrow