Zagreb in Croatia is a quick two hours away from London so the possibility of a dinner in Zagreb an event in nearby Ljubljana in Slovenia the following day followed by a further meeting in nearby Trieste the same day, is the sort of trip where rail travel should be the obvious choice. It isn’t.

Zagreb to Ljubljana by train

On the day in question there were two trains, one in the very early morning, the next the 18:23 overnight sleeper service to Zurich, which takes two and a half hours to Ljubljana. Fine if you want to go at 1823, no good for arriving from London early afternoon and wanting dinner in Zagreb. Tickets were on sale in the ticket office. Booking on line for the equivalent bus journey took seconds and cost 8 Euros, allowing departure the following morning at a comfortable 10:00.

The train timing did allow for a visit to the station to see this train go. It starts in Serbia and arrived on time with two through Serbian coaches plus four more which were detached at Zagreb. A further six Croatian vehicles, including a sleeper and a couchette were attached at Zagreb and the train left, also on time with eight coaches and about twenty-five passengers in total, including three using the couchette and two on the sleeper. There was no sign of any catering. The Serbian vehicles were completely covered in graffiti - totally off putting to any joining passengers, although inside they were modern vehicles. The Croatian vehicles were well presented and also modern, and would have been welcoming except that the lights were out for most of the dwell time in the station owing to the twin detaching and attaching movements, so that head end power was lost. The number of staff associated with this departure on the platform was about twelve, although not all seemed to have specific duties.

Overkill for 25 passengers. The Beograd, Zagreb, Ljubljana train that goes through to Zurich. Quite decent Croatian equipment.

It is difficult to conclude that a train of this size weighing over 600 tonnes running so infrequently with 25 passengers serves any significant transport purpose. Nor does it contribute positively to the environment, rail’s trump card if played properly. The main observation however is that the whole thing appeared to be from another age when compared to what one might expect in the form of a say a two hourly Inter City style rail operation.

And so on to the Zagreb to Ljubljana Flixbus

The fare was slightly less than the train, but the frequent timing allowing a 1000 departure was the reason for using it, allowing a comparison of the bus option with the train. Like the train, the bus left on time, although the comparison of staffing was stark. The driver helped with loading luggage, checked the tickets on a hand held device and said hello. No other staff involved. 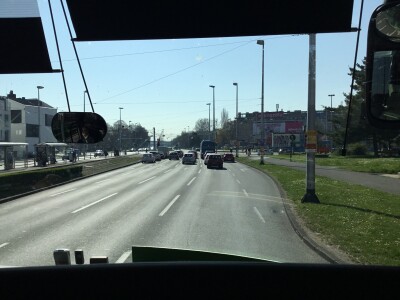 The competition - the Flixbus leaving Zagreb.

The bus has the advantage of a new well aligned EU funded motorway throughout, unlike the single track railway. For this leg the end to end journey took a similar time to the train. The bus could be quicker but for a couple of quirks built into the schedule. Firstly, the border crossing. Leaving Croatia, everybody gets out at the border, walks into the customs shed, passport checked and out the other end, and waits for the bus to draw up. Meanwhile the bus is thoroughly checked as the route is allegedly a significant one for gun smuggling, then pulls up to the lay by and everybody re-boards.

Amazingly half a mile down the road all this is repeated on the Slovenian side, just like the old days. You may well observe that both these countries are in the EU! The driver then announced a coffee and toilet break at an excellent adjacent motorway service station - really good coffee and a range of food and snacks in quality terms unlike anything seen on a UK motorway. Forty minutes later all aboard and ready to go. Well not quite, as the driver explained that his break was monitored by the tachograph, just a few more minutes to wait!

The overall journey time was the same as the train, with the bus speed limited to 100 kph plus the enforced work outs at the border.

The rail product was completely wrong for the market, judging by the number of people using it, although the train itself perfectly comfortable. The bus scored on ease and certainty of booking and informality. The bus station compared less favourably with the railway station with no boarding point information whatsoever, despite a waiting area above the bus stands leading down to individual stops.

The bus pulled into Ljubljana station car park where a line of other Flixbuses and other coach operators was waiting so providing a timed connection network to and from a massive range of destinations.

Ljubljana to Trieste in Italy by train

The comparison over this section was different. This time after a few hours in Ljubljana there was a train! The rail service is now provided by Italian Railways as an all stations local train, again running only twice per day The equipment was a low floor light rail style train. There are no longer any through long distance trains (the Zurich train turns north into Austria at Ljubljana). Despite only two a day a 1620 departure was perfect. Cash purchase £8 at the ticket office, no on line bookings, so the train option was taken. The train was quite busy performing a local function along the way. A thoroughly pleasant experience through nice countryside in a modern light rail style train with seats aligned with the windows and a clean accessible toilet, operated as Driver Only operation (DOO) with a conductor checking tickets on the Slovenian side.

The train took nearly 3 hours, whereas the bus takes one hour and a half, so again the bus has the through market. This time the border problem affects the train, not the bus. The bus sails through but the train stops at Villa Opicina for over 20 minutes, no longer for formalities but for operational recovery. Again whilst the motorway cuts straight through the hills, the railway has not been upgraded.

The geography does not help here as Villa Opicina is only 3 miles from Trieste as the crow flies or by the Opicina tram (currently suspended following an accident). The train arrived at Trieste just under an hour after arriving at Villa Opicina!

The bus wins on speed and frequency hands down, but by combining the service with a local operation, using modern equipment, the rail option is perfectly viable, but only if the times luckily fit. It just needs to run hourly and be speeded up a bit to compete with the bus. Booking at the ticket office was quick and easy, but would anyone really chance putting this option in a tight pre planned itinerary? This case was against the background that there were another half a dozen buses to go and that I could book instantly on my i phone, after the last train left at 16:20. 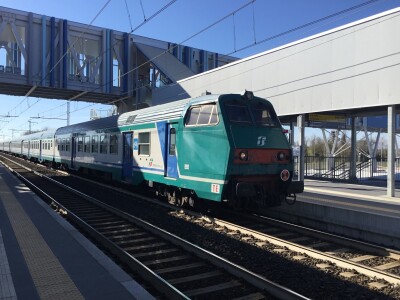 Trenitalia provide a well-used fast hourly train from Trieste to Venice which stops at the new Trieste Airport station, with level, covered access into the airport terminal building. The fare is £3, so illustrating that where the railway has provided a good service timetable, easy booking, and attractive fares, not just the equipment, people will use it in droves. The bus operators have gone for high equipment utilisation, low staffing levels and critically, really easy to use booking and reservation systems.

We have noted before that Italian Railways and Metro operators provide good signage using Braille.

Bus operators like Flixbus are growing fast, based on customer service. The railways do not have to lose this battle, based upon these limited examples, but they do need to try harder and provide a service that is relevant to today’s travellers, making more and more frequent short and medium distance journeys.