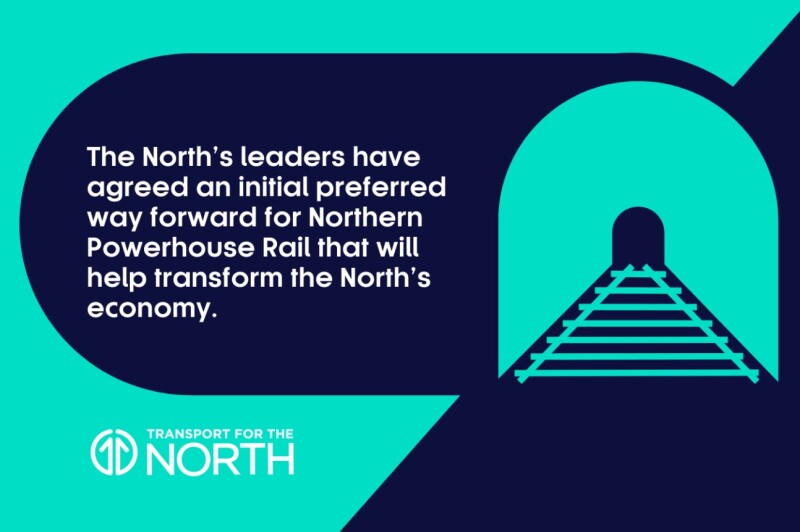 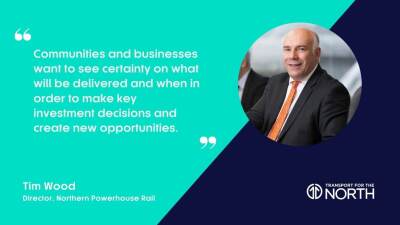 Image by Transport for the North.

The plan is now with government – don’t forget that Northern Powerhouse Rail is a co- cliented project between Transport for the North and the Department for Transport, so the recommendations carry some weight as they are effectively submitted by the DfT to the DfT.

HS2 Ltd made the near terminal mistake of not agreeing the route with stakeholders before embarking on the project, spending many years tweaking the project as a result. The resultant route map is shown below: 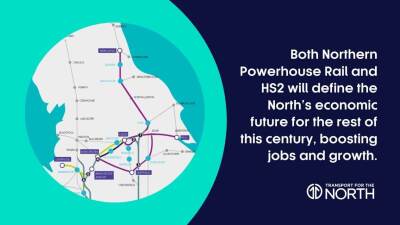 The route map shows the planned new and upgraded lines as well as the full Eastern branch of HS2 to Leeds. If HS2 were to be curtailed changes would be required. Image by Transport for the North.

Northern Powerhouse Rail started the other way round, designing the plan around stakeholders. There is clearly something for everyone in the plan geographically, as a result but an integrated plan it ain’t.

There is a strong opportunity to shape this into an integrated plan, but further detail is required, particularly on how the listed elements come together, especially in Northern cities of Manchester, Sheffield, Bradford and Leeds. Getting the project right in these locations, as well as the interfaces with HS2 will be key to the project being seen as an integrated plan for rail in the North.

Railfuture’s branches in the North (North West, Yorkshire and North East) have been in active dialogue with Transport for the North on the proposals. The NPR project is seen as a catalyst for bringing benefits to the whole region and so must be properly integrated into the rail network so that maximum benefits can accrue to urban, suburban and regional rail services, and - increasingly in importance - freight.


A new line from Liverpool to Manchester

The original line from Liverpool to Manchester was the first and the best for speed. The route is now clogged up and misses both Warrington and Manchester International Airport, the latter not surprising in 1830! Image by British Stamps.

HS2 will be underutilised south of Manchester Piccadilly unless other services use it. Railfuture strongly supports the NPR proposal to use HS2 for services to Manchester Airport, construction of a delta junction permitting trains to run onwards with some new alignments to Warrington and Liverpool. 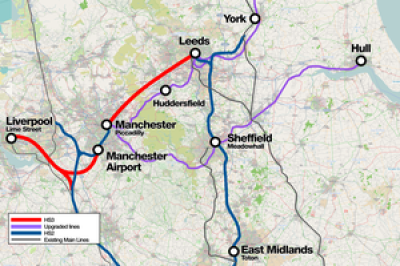 Map of proposed routing from Manchester to Liverpool. Image by HS2 Ltd.

The benefits of such a proposal are maximised by the construction of Manchester Piccadilly station as an integrated HS2 NPR through station so facilitating through high speed services from Birmingham, Liverpool, Manchester Airport to Bradford and Leeds. Such an approach is inferred in the plan but not overtly stated. Presumably this is awaiting feasibility verification. Railfuture considers that it is an essential element of an integrated HS2/NPR plan.

A new line from Manchester to Leeds via Bradford City Centre

This is the core element of the NPR project. West Yorkshire has many substantial towns west of Leeds where serious capacity constraints limit the frequency of Metro services, given the parallel need for fast regional services.

Additionally Bradford is the only inland city in England without a through service. 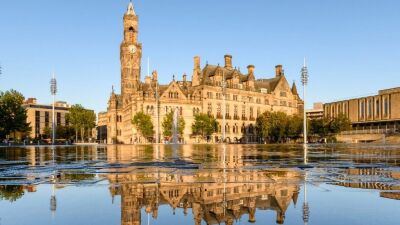 Bradford City of Culture 2025, potentially the centre of an integrated rail network serving the Calder, Aire and Wharf valleys based on NPR. Image by BBC.

The NPR proposal envisages a new line routed via Bradford as well as an upgrade of the existing route via Diggle. Network Rail has already commenced upgrading the Diggle route with the four tracking scheme in the Mirfield area and are keen to see the route developed.

Railfuture welcomes the announcement of the new NPR line and its routing via Bradford City Centre. To maximise regional strategic benefits, the opportunity must be taken to integrate the two stations in Bradford and provide linkages into and out of NPR in Bradford to serve other towns, for example served by Interchange to the Calder Valley and north of Bradford currently served from Forster Square. Bradford should become a major hub for NPR so easing interchange pressure on Leeds. 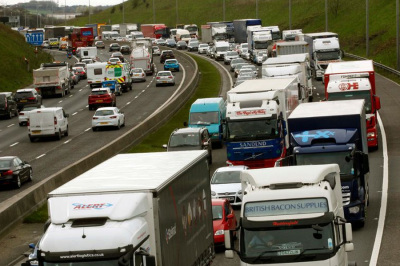 Many motorists would agree that a realistic alternative to the M62 motorway is essential. Image by Highways Industry.

The Diggle route remains an important route for passengers (serving Huddersfield, Dewsbury, Batley etc) and freight. The recent announcement that Drax will switch off its two remaining coal generating units in March and move to entirely burning biomass (in four generating units) is highly significant to Trans Pennine freight given the purchase by Drax of Canada’s Pinnacle Renewable Energy which produces biomass pellets. It is important that the new NPR route is complemented by upgrades to the existing Trans Pennine routes.

Sheffield to Manchester upgrade via the Hope Valley 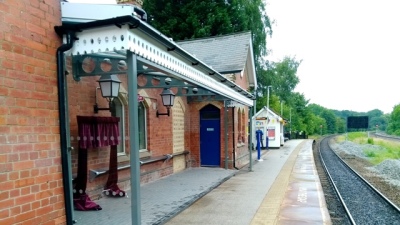 The sole existing main line passenger and trunk freight railway from Manchester to Sheffield is the Hope Valley line, pictured at Dore station, one of two single tracked sections on this route (the other is at Hazel Grove). Image by Community Rail Network.

There is feeling that Sheffield, a city of over 550,000 people, draws the short straw when it comes to Trans Pennine transport investment, both road and rail. There is no motorway between Sheffield and Manchester, not even an all weather road as both Woodhead and the Snake Pass are frequently impassable and the remaining railway is single track in two places and not electrified.

Existing and future demands on this route requires an upgrade in capacity and speed improvements for passenger trains. Network Rail is addressing the bottleneck at Dore station by double tracking and provision of a loop in the Hope Valley for freight trains. Projections of increased demand for aggregates from Buxton and Peak Forest and cement from Hope exceed capacity for the Hope Valley Line.
Railfuture therefore welcomes the inclusion of a strategic upgrade of this route throughout, which must include:
Upgrade and electrification of the routes from Leeds and Sheffield to Hull

Effectively creating a four track East Coast Main Line is supported by Network Rail and seen as a priority by Railfuture irrespective of the nature of the NPR proposal. It is also important irrespective of whether HS2 Eastern leg goes ahead. 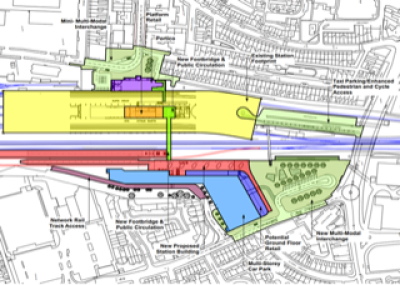 Transport for the North is right to incorporate this well-documented proposal into the NPR plan, particularly if it is integrated in a way designed to bring benefits to Teesside and Wearside. The plan includes rebuilding Darlington station.

Railfuture is aware that the NPR proposal is a long term rail infrastructure plan for the whole region so we include our priority list in terms of the order of implementation of the listed key elements of the NPR strategic plan.

Railfuture contends that the prerequisite for the NPR plan is for the government to finalise its position on HS2 serving Sheffield with HS2 at least as far as East Midlands Parkway linking into the Midland Main Line and electrification of the MML throughout to Sheffield (and indeed onwards to Leeds if HS2 were to be cut back in the East Midlands, preferably on a better alignment than the current Moorthorpe route). An interesting alternative to improve connectivity between Sheffield and Leeds has been proposed by Weston Williamson.

It is clear that consulting regional stakeholders has resulted in a plan that brings benefits to the whole region as apart from being seen as a Manchester to Leeds high speed line. It is capable of being viewed as an integrated plan, particularly when more detail emerges on how the various elements come together in key cities in Northern England.

Railfuture has strongly campaigned for electrification, so is pleased that the plan potentially results in electrification of the strategic rail network in the North including Trans Pennine routes Diggle and Hope Valley and to Hull.

This briefing is a broad commentary on the NPR proposal as put to government. Our branches will continue to discuss more detailed proposals with Transport for the North and with individual stakeholders.

Railfuture will update this commentary following government’s announcement on the HS2 proposal, authorised at present from London to Crewe. The leg to Manchester is pending further consideration on how HS2 should fit with NPR in Manchester. The Eastern leg of HS2 under general review. The general position of many stakeholders in the North is that NPR is a greater priority than the Eastern leg, but the NPR plan as published includes the HS2 Eastern branch. The NPR plan will need to be re-examined in the Sheffield area if HSE East is curtailed. 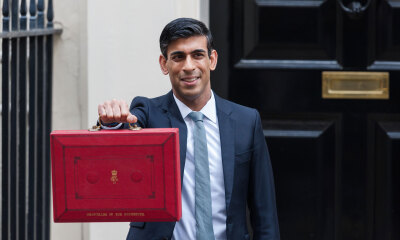 We hope the Chancellor’s budget announcement on 3 March 2021 of setting up a UK National Infrastructure Bank in Leeds is a good omen for Northern Powerhouse Rail!

Railfuture campaign for a rolling programme of electrification