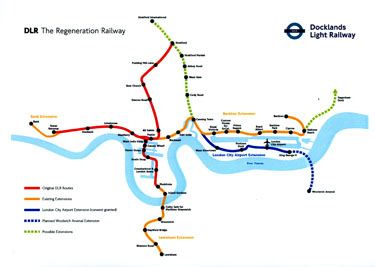 The Government has given the go-ahead for a stretch of heavy rail in London to be converted to light rail.

The decision has implications for London's bid to stage the Olympics and also the opening of the Channel Tunnel rail link through Stratford.

The stretch to be converted - between Stratford and Canning Town - will allow for a significant expansion in in five years time of the Docklands Light Railway which is already extending to London City airport. (Airport services start next year.)

Existing NLL services between Stratford and North Woolwich will cease but DLR plans to increase frequencies and build new stations.

DLR is already working on a new rail link under the River Thames to Woolwich Arsenal which will open in four years time.

The station at Stratford International will link DLR and the wider Docklands area to both the International trains from Paris and Brussels as well as high speed domestic commuter services from Kent.

New connections to DLR on the converted line will include the Jubilee, Central, District and Hammersmith & City Underground lines as well as C2C, One Great Eastern and One Anglia National Rail routes.

The NLL currently runs two trains an hour, but DLR will improve this to every 10 minutes and more frequently in peak hours,.

The new DLR route "will provide capacity and flexibility for future growth and be an important part of the rail network serving the proposed Olympic sites".

DLR will upgrade the trackwork and power supply, construct the new stations and purchase new rolling stock at an estimated cost of £90million. The line could be open in 2009.

"Following the extensions to London City Airport and the planned extension to Woolwich, this is another important piece of the jigsaw in terms of transport and regeneration in Docklands," said Howard Smith, director of DLRL.

"The link to the high speed line and the Olympic connection make this a significant milestone in the development of the Docklands Light Railway.”

Sir Robin Wales, Mayor of the London Borough of Newham, added: “We are particularly pleased with the news. We have long felt that the high frequency local service and extras connections that a DLR service can provide will support our aspirations for the regeneration of the Lea Valley.

"We have worked closely with DLR on a number of projects and look forward to developing this scheme to support the Olympic bid”.

Part of the NLL between Canning Town and North Woowich is expected to be used for Crossrail.