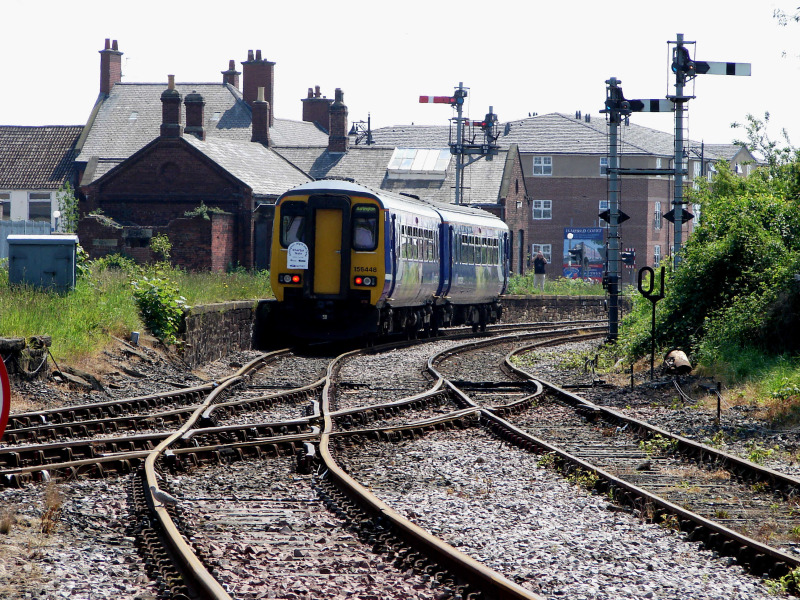 Photo of SENRUG Charter 2008 at Bedlington on the Ashington Blyth and Tyne route by John Brierley.

Although slowed by the COVID crisis, the government continues to demonstrate commitment to rail by pressing ahead with its Restoring Your Railway initiative. The third and final round of the Ideas Fund was launched on 23 January 2021. Earlier, ten successful bids to the first round of the Ideas Fund were announced in May 2020, and a further 15 from the second round were announced in November – a common factor of these bids, if delivered, is that they will connect significant numbers of people to the rail network and, as the Transport Secretary said in November, "Entries have been specifically judged on their ability to deliver real economic benefits and support left-behind communities, with investment targeted at regenerating local economies by: supporting new house developments, opening up access to jobs and education, boosting tourism."

Some of the other 85 bids submitted in the first two rounds, and some of the 85 bids submitted (or resubmitted) in the third and last round, could offer worthwhile benefits. We aim to engage and support the promoters and the sponsoring MP to get them selected.

Railfuture is campaigning for new rail lines to be opened, and some closed lines to be reopened, to increase capacity, connectivity and resilience in the strategic network by creating alternative routes between major centres, to provide additional metro services for our growing cities, and to connect isolated towns.

£500m will not go far but it's a start
Railfuture welcomed the government's January 2020 announcement of funding for Reversing Beeching, and bid guidance. This was a successful outcome to the Rail reopening fund campaign launched less than two years earlier! £500m will only be enough to reopen about 25 miles of railway at typical Network Rail costs, so this funding should be used at least in part as seed capital to prove the viability of potential schemes, draw in more funding from elsewhere, and establish a pipeline of projects. To utilise that funding efficiently, a streamlined approval and implementation process is required, not constrained by current Network Rail procedures.

Railfuture submitted its candidates for the new Restoring Your Railway fund - the Ideas Fund, Accelerating existing proposals, and new stations - to the Department for Transport shortly before the 28 February 2020 closing date for the first round of bids to the Ideas Fund.

On 28 February 2020 the launch of third round of the New Stations Fund for new stations was welcome. The government must also make progress on market-led proposals, especially Southern Rail Access to Heathrow.

On 27 April 2020 the Department confirmed the second round of bids to the Ideas Fund required initial expressions of interest by 22 May followed by full applications by 19 June 2020.

On 23 May 2020 the Transport Secretary announced that 10 bids to the first round of the Ideas Fund had been selected to receive shares of the £500k fund - £50k each plus advice and guidance from DfT and Network Rail to help fund transport and economic studies and create a business case. Future funding to develop projects would be subject to agreement of the business case.

On 11 June 2020 the Rail Minister ran a webinar for the 50 unsuccessful bidders to round one. Around 20 which could deliver worthwhile benefits are being offered advice to develop their proposals further, for re-submission to the second June or third November round of the Ideas Fund. The remaining schemes need further development work to understand the best route forward, and bidders have been invited by the DfT to discuss next steps.

On 25 November 2020 the Chancellor of the Exchequer launched his Spending Review 2020 along with the National Infrastructure Strategy, which re-affirms "The government will also deliver on its manifesto commitment to spend £500 million to restore transport services previously lost in the Beeching cuts of the 1960s, including reopening the Ashington-Blyth line in Northumberland to passenger services, and restoring rail links to Okehampton in Devon." It goes on to say "The government will provide further feasibility funding for an additional 15 proposals to inform decisions on further development: reopening Beeston Castle and Tarporley station in Cheshire, St. Anne’s Park station in Bristol, and Ferryhill station in County Durham; reinstating links between Bolton, Radcliffe, and Bury; the Stratford-upon-Avon to Honeybourne/Worcester/Oxford line; new stations at Waverley in South Yorkshire and a station in the Langport/Somerton area of Somerset; improved services from Melton Mowbray and Falmouth; upgrading the South Fylde Line; the Maid Marian line between Nottinghamshire and Derbyshire; reinstating rail access to Cirencester; restoring services between Swanage and Wareham; the South Humber rail link; and a new link between Consett and Newcastle. The government is also expanding the third round of the New Stations Fund to £32 million. This will fund the opening of railway stations at Edginswell in Devon and Thanet Parkway in Kent; and St. Clears in Carmarthenshire. It will also provide funding to further develop proposals for stations at Haxby in York and Deeside in Flintshire." (Chapter 2, Levelling up the whole of the UK, Connecting nations and regions.)

On 26 November 2020 the Transport Secretary confirmed that, as part of the wider £500 million Restoring Your Railway Fund to develop proposals that level up transport links across the country, 15 rail schemes were awarded up to £50,000 to accelerate plans that could restore lines and stations to communities, including those closed during the Beeching cuts, and government is investing £32 million to develop and construct new stations in England and Wales. "Entries have been specifically judged on their ability to deliver real economic benefits and support left-behind communities, with investment targeted at regenerating local economies by supporting new house developments, opening up access to jobs and education, and boosting tourism." A further 28 un-named bids "will receive further guidance to help develop and refine their ideas for assessment in future funding rounds"; the identity and fate of the other 8 of the 51 bids to the Ideas Fund round 2 remains unclear.
Also on 26 November 2020, the Department for Transport published a schedule of all 25 winning bids from round 1 and round 2 of the Ideas Fund.

On 23 January 2021 the third round of the Ideas Fund was launched, closing Friday 5 March. On 11 March the Rail Minister tweeted that "over 85" bids had been received. The full list of bids is here - first published 8 September 2020, latest update 12 May 2021 results in original 85 round 3 bids becoming 89, and some re-naming, after initial assessment.

On 19 March 2021 the DfT confirmed funding for restoration of regular daily services for Okehampton by the end of the year.