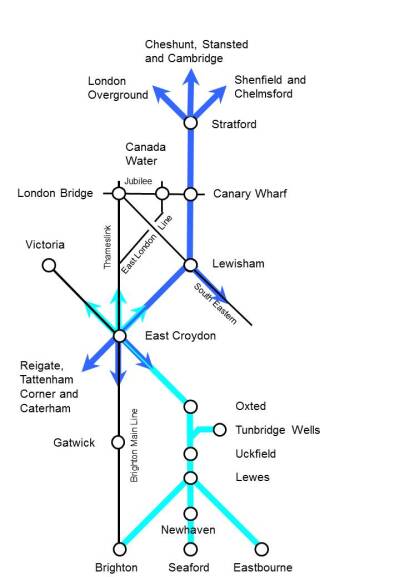 The vision is to connect expanding economic and population centres in London and the South East with a new electrified double track rail link, bringing businesses and communities closer together to drive sustained economic growth.

Network Rail predict over 400% traffic growth through the day on the East London Line by 2043.

The London 2050 Infrastructure Plan presentation shows standing at 3-4 people per sq. metre on the Jubilee Line between London Bridge and Canary Wharf.

The Network Rail Sussex Route Study shows 2-4 people per sq metre standing between East Croydon and London Bridge. The density of standing passengers will increase and passengers will have to stand for longer, for example for 45 minutes from as far out as Haywards Heath.

A high proportion of the demand on these routes will be passengers travelling between East Croydon and Docklands, via London Bridge and Canada Water. This is a symptom of the shift of London’s economic centre of gravity eastwards, but (aside from Crossrail) the rail network has yet to catch up.

The capacity improvements currently planned by Network Rail for the Brighton Main Line and the East London Line will fail to meet these future travel demands with an acceptable journey experience.

Further development of the rail network is therefore required to provide:
Without this additional development, economic growth will be held back and passengers will continue to suffer limited connectivity and severe overcrowding.

The capacity and connectivity benefits which will be delivered by this new Thameslink 2 route are:
A link a Lewisham would also enable Thameslink 2 to provide extra capacity for trains on the South Eastern route, which will reach the limits of terminal capacity in 2024, providing a direct connection with Docklands avoiding Zone 1 and thereby avoiding the need for an extremely expensive and disruptive expansion of Charing Cross.

Taking a helicopter view suggests that strategic development of the London rail network should include a SE-NW cross–London route, a North – South route through Docklands, an outer orbital route, and better BML-Old Oak Common links – which will provide the necessary extra capacity that the London termini cannot.

The key economic centres in East, South-East and South London which should be linked by a new north - south route are Stratford, Canary Wharf, Lewisham, Croydon and Gatwick. The key question is whether the need is for a metro or longer distance service – a metro all-stations would primarily serve the London area, with services no further south than Gatwick, whilst a longer distance limited stop service would serve only the major stations listed above, and include destinations further out like Brighton.

Funding this project, which will cost in the order of £10Bn, will be a challenge. It will be essential to have the support of TfL and business; to achieve this, the solution must provide benefits to the population and businesses in London. Therefore the service map for the route includes destinations such as Tattenham Corner and Caterham, and extends services over London Overground, in addition to linking Docklands with airports and major centres outside London.

There are two alternative approaches:
Property and playing fields close to the line, especially the new development around Catford, preclude quadrupling the Elmers End to Lewisham section of the Hayes branch throughout as this would be very disruptive.

There are four options for connecting Thameslink 2 with the Brighton Main Line in the East Croydon area, which can all be used with either of the approaches above:
The first three options assume that 2 additional platforms at East Croydon, and six tracks north of East Croydon, are provided in CP6 as planned by Network Rail.

Destinations south of the river could include Sutton via West Croydon, Caterham, Tattenham Corner, Reigate, East Grinstead and Gatwick; and for longer distance services, Brighton and the Sussex Coast. Destinations on the South Eastern route could also be served, but these would fit better with a future SE-NW Crossrail 3 route. To the north, destinations on the West Anglia and Great Eastern lines can be served, and there is potential for services to be extended on to an outer orbital Overground network, which would provide a more even traffic loading throughout the day.

Buried in the National Infrastructure Commission report Review of the case for Large scale Transport Investment in London, at para 3.5 (page 41 of the pdf) there is support from Lord Adonis for our Thameslink 2 proposal:

'There is currency in the view that there is a case for a third Crossrail scheme and one version of this would be to extend the existing Lea Valley line southwards from its end-point at Stratford to the Isle of Dogs and then southwards across the Thames to connect with the national rail network, possibly connecting with the Brighton Main Line and providing congestion relief to it.'

In November 2016 Railfuture urged the government to Invest for growth by committing to a long-term investment programme which will:
The London and South Coast Rail Corridor Study commissioned by the DfT was published in March 2017 but focused on improvements to the Brighton Main Line, which Railfuture supports as a member of the Brighton Main Line Alliance. It did, however propose a new approach to Uckfield-Lewes.

However, in a written response to the report, Rail Minister Paul Maynard, encouraged promoters of the London & Southern Counties Railway to continue developing their proposals for a line linking Stratford, Canary Wharf, Lewisham, East Croydon and the South Coast to be delivered privately. Even more compellingly, the minister said that if local communities could accept additional local housing and commercial development along the route, the route could become more viable. See our article Never-never railways.

The next steps will be to:
Railfuture will work with the new London & Southern Counties Railways Consortium, potential stakeholders, local authorities and Local Enterprise Partnerships to define and agree the strategic problems that the route is intended to solve north of East Croydon. This strategic, holistic view of transport needs for London and the South East is needed now, so that Thameslink 2 can be developed, implemented and brought into service in time to meet the predicted traffic demand. 2043 will be too late.