During the late evening of Tuesday 4 February 2014 a storm surge breached the sea wall carrying the railway at Dawlish (pop.16k). Eighty metres of track were left hanging, the adjacent road cut and several houses undermined. This had the effect of cutting off Cornwall (pop.570k), Plymouth (pop.262k), Torbay (pop.136k) and south-west Devon from the rest of the British railway network. Network Rail used shipping containers full of rubble to prevent further erosion of the breach in the sea wall. 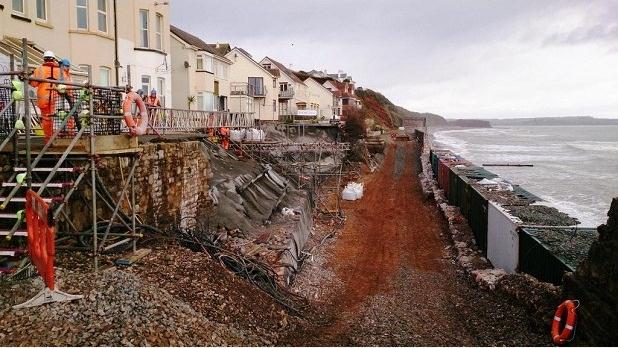 The line reopened as planned just two months later, on 4 April 2014. Eight years on, a new sea wall that is being built by Network Rail is proving to be effective at protecting the railway and town from rising sea levels and extreme weather. See a resilient railway for the next hundred years in this short video.

On 8 February 2014 both lines to Taunton from the east were also closed by flooding whilst Whiteball Tunnel was already closed for maintenance, and the South-Western line to Exeter was closed by a landslip at Crewkerne. These left Exeter (pop.131k) and Taunton (pop.70k) totally isolated. The lines were all reopened by 10 March 2014.

The economy of the South-West cannot afford to be cut off for long periods of time again in future. In November 2012 Railfuture published Railway Flooding in Devon: Observations & Recommendations, which can be viewed or downloaded. These recommendations have yet to be actioned. At our Taunton conference in June 2013, the speaker John Dora of John Dora Consulting, a former Network Rail engineer, warned about environmental problems and referred particularly to the sea wall. A study published in the Journal of Transport Geography in December 2015 claimed that rail services to and from the South West of England could be disrupted for more than ten per cent of each year by 2040 and almost a third by 2100.

When the damage had been repaired, Railfuture called for:
The Peninsula Rail Task Force, a stakeholder group comprising local authorities, Local Enterprise Parnerships and transport campaigners, was set up to speak with one voice for the South-West. Network Rail set up a study in March 2014 with a remit to generate an appraisal of three alternative scenarios in relation to the maintenance of connectivity for the South-West peninsula in the event that the Dawlish coastal route is not available due to severe weather or maintenance requirements. The West of Exeter Route Resilience Study report was published on 15 July 2014. Journey time improvements which are needed to promote economic growth were covered separately by the Network Rail Western Route Study published in August 2015.

The South West Peninsula Rail Task Force gave the Government its three-point plan for improving the rail lines in Somerset, Devon and Cornwall to support economic growth. It asked for:
The current main line via Dawlish has to remain as the main route because of the major population centres along its length. Breakwaters are needed around Dawlish as it is not the sea height that does the damage, but the wave action. Additionally the cliffs around Teignmouth (pop.15k) need significant rock bolting; we can see from the Harbury Tunnel landslip how long this can take to put right.

The Destination Okehampton group of local councils has been pressing for the northern route to provide resilience and promote economic growth in the area, and received support from transport ministers. A fully dual-track northern route with brand new Meldon Viaduct was quoted by the Network Rail study at £875m. However, another feasibility study being undertaken will look at whether a single line with long dynamic loops can perform as well, and also whether the existing Meldon viaduct is usable. Railfuture’s work in progress suggests that a partially single-track route could still give 4 train paths each way per hour, two for timetabled stopping services and two closely following for diversionary or other trains. There were reports of Network Rail personnel at Meldon Viaduct and also at Sourton, which is close to the junction of the A30 and A386, one possible location for a parkway station serving North Cornwall.

The first priority for the South-West must be to ensure that connectivity is maintained, both for Plymouth (pop.262k) and the large number of communities between Exeter (pop.131k) and Newton Abbot (pop.26k). Therefore Railfuture consider that the sequence in which enhancements are implemented should be:
Our brief Campaigning for better rail services for the South West of England by Chris Austin OBE can be viewed or downloaded; our response to Network Rail's Western Route Study can be viewed or downloaded; or read Philip Shelton's article 'The case for Okehampton'. There are also articles by Gerard Duddridge in Railwatch July 2014 (pages 10-11) and December 2014 (pages 12-13) on the alternative routes.

STOP PRESS - February 2022: on the eighth anniversary of the 2014 storm, the new sea wall is playing a key role in protecting the town and railway.

December 2021: not Dawlish but all part of a more resilient railway for the South West, Network Rail have submitted plans to reduce flood risk in Mid-Devon on the Exeter St. Davids-Taunton line south of the planned new Cullompton station.

July 2020: Network Rail marks completion of the new sea wall's first section. A review of works, one year on.

June-September 2019 Work begins! After a break for the summer holiday season works restart in September.

Your details will be kept secure, will not be passed to any third party, and will only be used by Railfuture for the southwest rail network resilience campaign.