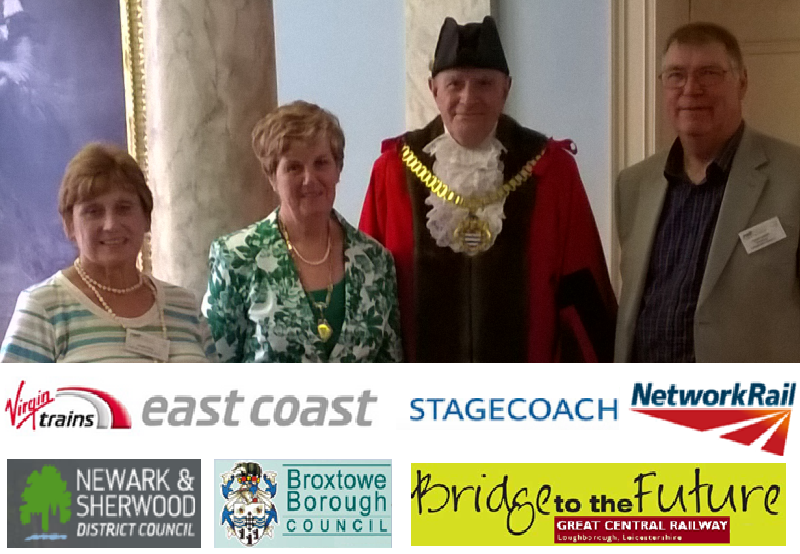 Attendees of the Railfuture Summer 2015 Conference in Newark were welcomed by the Town Mayor Councillor Robert Crowe and his wife. Also shown above are Railfuture Lincolnshire branch chairman, David Harby, who helped organise the conference, and branch sales and catering officer Sue Dovey.

Railfuture organises two national conferences a year, which are open to anyone to attend but members get a discount. The summer 2015 conference, entitled “The Way Forward“, was held on 22nd June in the splendid Grade 1 listed Newark Town Hall and attended by nearly 100 delegates from around the country.

Railfuture’s conferences, which are remarkably cheap compared to other events, are regarded highly not just by members but also the speakers, who have a chance to engage with knowledgeable rail users. The conferences provide an insight into how the railway works, and give attendees the chance to question and influence some of the key people who run the railway. Former East Anglia branch secretary Nick Dibben felt that every speaker offered something useful but different and he gives his personal review below.

The first presentation was by an enthisiastic Graham Botham, Principal Strategic Planner from Network Rail for the East Coast Main Line.  He explained that this was his ‘dream job’, developing and implementing plans for the mixed-use route, which was expected to see considerable growth in the next 20 years. Schemes like the recently completed Hitchin flyover were making a difference to performance by reducing delays. One key project is the enhancements required to deal with the forthcoming new intercity express trains. There was a need to increase power supplies and loading gauge enhancements to cope with the longer coaches, 26m instead of 23m long. The work is costing around £400m.

Other projects that he mentioned included reducing journey times, freight passing loops and additional track to enable an additional inter-city service to operate each hour as well as additional freight trains. The plan was to divert some freight trains off the main line and send them via Spalding and Lincoln. Much work on this route had already been completed; the main phase was to create a grade separated junction using a dive under at Peterborough.

The nearby flat crossing at Newark was also being looked at; there was limited space between existing bridges to create a flyover that could be used by heavy freight trains. The proposed HS2 was essential in the long term for creating more capacity south of York and could enable new regional services such as Leeds to Cambridge to use the East Coast Main Line.

Away from the main line, the Great Central Railway also has plans to develop. As well as a popular tourist railway, the line was also used for testing and staff training for the national railway network, and is therefore relevant to Railfuture’s campaigning. Tom Ingall from GCR explained that the route is currently in two sections with the missing link at Loughborough. Initial ideas join the routes by crossing the Midland Main Line involved use of second hand bridges from the Reading area, but it was considered that a single span across the Network Rail tracks would keep future maintenance costs down. Nearly £1m has been raised so far for the project, which is expected to take several years. It was hoped to co-ordinate the work with upgrade work on the Midland Main line to save money. The possibility of a community rail service over the completed link that would link Nottingham and Leicester was discussed. At present the numbers do not suggest a viable service, but this is being kept under review.

The headline speaker was David Horne, Managing Director of Virgin Trains East Coast (VTEC). He described the first few months on the new eight-year franchise that started in March 2015. He said that the company’s aims were similar to those from a GNER document from 1946: speed, comfort and convenience. Most journeys on the route were optional and passengers had a choice of other modes as well as other rail companies, for example 75% journeys between London and Edinburgh were by air. VTEC therefore had to consider the total experience from thinking about making the journey to leaving the station at the other end. Reducing some fares by 10% had already made an impact, with more passengers and overall income increasing.

Mr Horne talked about the 65 new IEP trains that were being built. They are a mixture of five and nine coaches, electric and bi-mode. They should start arriving in 2018 and will enable an increase in the number of services provided and allow new destinations to be served. He noted that the Government, who had procured the trains, did not consider buffet cars to be necessary, something that VTEC had corrected!

After lunch, Andy Castledine from Stagecoach Rail explained the process involved in putting together a rail franchise bid. It is a lengthy process from completing the pre-qualification questionnaire, to understanding the aspirations of stakeholders including Railfuture to discussions with government officials once the bids are submitted.

Councillor Roger Blaney, leader of Newark and Sherwood District Council, set out the role that the railway is playing in the future development of Newark. Newark was a town of 35,000 people.  In the next 10 years, 14,800 new homes and new employment areas were planned in the area which would put pressure on local transport. Although the town enjoyed rail services in all directions, the route between Nottingham and  Lincoln had seen little investment and still had manually operated level crossings. However from May this year there were now two trains per hour between Newark and Nottingham; a fast train and an all stations service. Cllr. Blaney also supported the idea of a Leeds to Cambridge/Stansted Airport service and the District Council were looking at re-introducing passenger trains on the Ollerton Colliery Branch.

Steve Barber from Broxtowe Borough Council, which is based in Beeston, detailed the role that transport campaigners played in getting the Nottingham Tram (known as NET) extended to Beeston. Many objectors had been won over by visiting the Croydon Tram system and talking to Croydon residents, who have gone from concerned locals to regular users of the tram. The new routes were due to open in summer 2015.

To complete the presentations, Bob Poynter talked about ways to improve the local train service that should be included in the next East Midlands franchise. The importance of getting all local groups including MPs,  authorities and business groups to have common aspirations so that the Government takes notice.

Nick Dibben sums up by saying it was “a great conference with a range of interesting speakers to show what is and what can be done to improve rail services.”