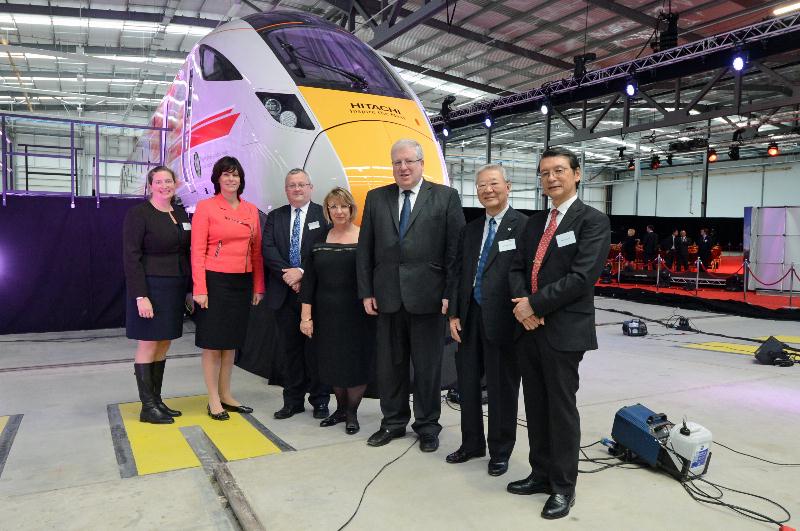 Railfuture welcomes the arrival of Hitachi in Britain. Hitachi is arguably the most important manufacturer of rail equipment in Japan and as a producer of Japan`s Shinkansen high speed trains, one of the most important train manufacturers globally. The location of their global headquarters in London and the official opening on 3rd of September 2015 of their new factory in Newton Aycliffe, County Durham, is good news for the British economy and for much needed employment in North East England as the factory there will have a workforce of 730 people.

The importance attached to this by the government was demonstrated by the presence of the Prime Minister David Cameron, Chancellor George Osborne, Transport Secretary Patrick McLoughlin and Rail Minister Claire Perry at the event.

Assembly at the new factory of the much publicised IEP (Inter City Express Programme) train will embody many components manufactured by British companies in keeping with Hitachi stated policy to source components from the UK where possible, helping to spread job security more widely.

Confirmation of the Scotrail order for Hithachi`s AT200 inter regional EMU is also a major boost for the North East. These will be a mix of 46 three car and 24 four car units with a maximum speed of 100mph (see Railfuture Rolling Stock Design Panel report on the AT200).

Of all the prototypes in the form of mock ups of new Hitachi trains we have seen, we were most impressed by the AT200. This is primarily because in this design Hitachi had dispensed with sliding doors and adopted external plug doors instead, allowing maximum use of internal width and the elimination of windowless door pockets.

In this context, our most serious criticism of the IEP design was related to the use of sliding doors with deep windowless door pockets that encroached on the width of an already narrow coach body, so much so that there was insufficient space for an arm rest between the seats placed in this gloomy area at the ends of the saloon. But for this, the IEP would be a most impressive train.

Computer images of the proposed AT300 125mph train indicate that this regrettable feature will also be included and we would strongly urge Hitachi to rethink this policy, especially since the AT300 trains will be used on some of the most scenic routes in Great Britain. Plug doors and windows please.

It is perhaps a disappointment that the AT300 trains for First Great Western services to the south-west will be manufactured in Japan as there will be insufficient capacity at the Newton Aylcliffe factory to cater for them.

Railfuture review of Hitachi AT100 and AT200