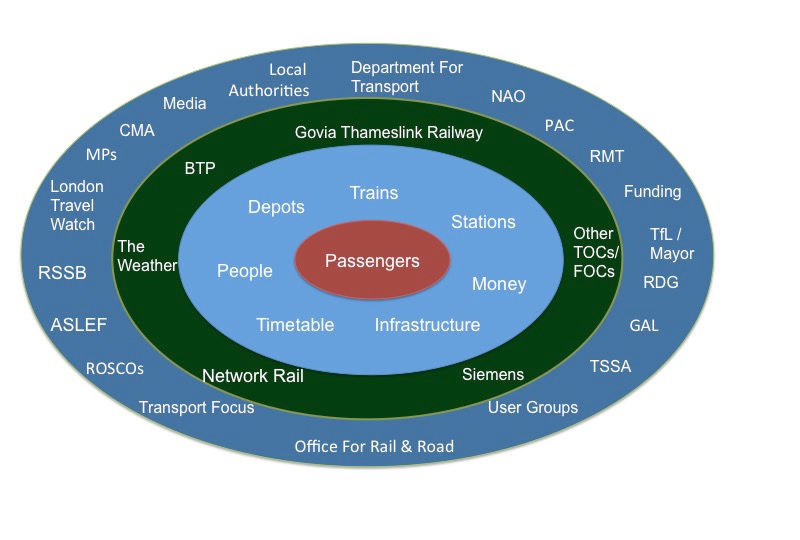 Chris Gibb’s independent report to the DfT on how the performance of the Govia Thameslink Railway franchise might be improved was published on 23 June 2017. Its recommendations include proposals that Railfuture already campaigns for, such as electrifying the Uckfield line. If these are implemented, then passengers could see an unprecedented improvement in rail services. This diagram, taken from the report, depicts the Southern system. At its heart are the passengers, who depend on all the other elements in the diagram for their train service. The light blue elements are the key ingredients that make the system work; the relationship between them is critical.

Chris Gibb, previously Chief Operating Officer of Virgin Rail Group and currently a non-executive director of Network Rail, was commissioned by the Department for Transport in 2016 to identify the actions required to improve the performance and passenger experience of Govia Thameslink, and in particular Southern, rail services.

Gibb found that the primary cause of the system breakdown in 2016 was the industrial action over the introduction of Driver Controlled Operation (unhelpfully referred to as Driver Only Operation). This magnified the impact of the issues listed above. Resolving the industrial action was outside his remit, but he believes that if the dispute is resolved and the report’s recommendations taken, then Southern will progressively recover.

The key recommendations of the report are:

The role of the System Operator

Teamwork across the system is critical, and the custodian of the overall system integrity should be better identified, empowered and trusted: the System Operator. In the Southern/GTR area this role is taken by the Alliance Board, led by the Network Rail Route Managing Director and GTR Chief Operating Officer, who have a close working relationship. A successful system must have active people engagement at all levels, and good leadership, and the objectives and incentives of all parties must be aligned.

Another way of looking at the system diagram is that all of the elements in the concentric circles are dependent on passengers for their existence – ie no passengers, no jobs. In 2016 Railfuture advised the Rail Minister that the rail companies must create a customer service culture in which everyone is focused on what is right for the passenger.

The infrastructure on the Southern network is in a poor and unreliable condition. At least £300m must be spent before the end of 2018 to improve current performance and deliver the new 2018 Thameslink timetable with an acceptable level of performance. This has been funded by DfT, but Network Rail also has to close a resource shortfall, and it is recommended that the overnight timetable be changed to allow more time for track maintenance. The changes proposed include earlier last trains, and concentrating overnight trains on the Thameslink route only.

There is a widely held view that GTR is too large. Gibb believes that there is an option to transfer the Great Northern Metro operation (ie services from Moorgate) to TfL in 2018; this accords with Railfuture’s Manifesto for London. Southern Metro services are very tightly integrated with the rest of the GTR operation, so could not be devolved before the end of the management contract in 2021. However the East Croydon – Milton Keynes service could be transferred to London Overground in 2018, integrating services on the West London Line and simplifying Southern’s operation.

Gibb proposes 25kV AC overhead electrification, not just because the ORR are against extending third rail, but because it would be cheaper – 25kV AC would only require one feed from the National Grid, whereas third rail DC would require several. The London & South Coast Rail Corridor Study used a cost estimate of £150m-£250m for electrification, but Gibb believes these costs are wrong; he suggests a figure in the range £75m - £95m, which is line with Railfuture estimates. He considers that redoubling would not be required, even in the event of reopening Uckfield – Lewes with a local half-hourly service. However he also proposes that to minimise land purchase, electrification equipment could be sited on the unused track bed next to the current single track; this foolish short-term cost saving would make future redoubling for a more intensive service much more expensive and difficult.

A new overnight stabling point at Crowborough for four 12 car trains, with crew recruited and signing on locally, would simplify the operation and reduce costs.

Network Rail does not have the capacity or funding to carry out this electrification, but GTR’s franchise agreement allows it to procure technical services from SNCF – so SNCF could be contracted to specify and design the electrification, and Keolis could then procure the implementation during the remaining term of the franchise. This would be a private sector investment maintained by the investor, on which a return would be earned from a surcharge on the metered electricity provided to the train operator – a small and therefore potentially attractive example of private sector funding to be considered by the DfT. To offset the extra cost to the operator, Gibb recommends that fares on the route be progressively brought into line with those on the parallel Hastings line, to reflect the improved quality of service that electrification would bring.

Railfuture campaigned to electrify Uckfield as a way of enabling longer trains without having to acquire more diesel units. We wholeheartedly support this recommendation, as the benefits of improved reliability and reduced operational cost can still be realised – and passenger capacity can be even greater than is currently available even with 10-car trains in the peaks.

The report recommends the transfer of the Ashford – Hastings service to South Eastern. Splitting of the Brighton – Ashford service, and this transfer are already mooted in the consultations on the GTR timetable and the South Eastern franchise. Railfuture considers that if the Brighton - Ashford service must be split, it should be run as overlapping services, Brighton – Hastings and Eastbourne – Ashford, which would provide a four trains per hour service between Eastbourne and Hastings.


Like Railfuture, Gibb supports the Network Rail plans to upgrade the BML to increase capacity and resilience. This will remove constraints at East Croydon, Haywards Heath/Keymer Junction, Clapham Junction and Victoria, and increase capacity further by introduction of digital signalling.


Gibb report:
Changes to improve the performance of the Southern network and train services and restore passenger confidence