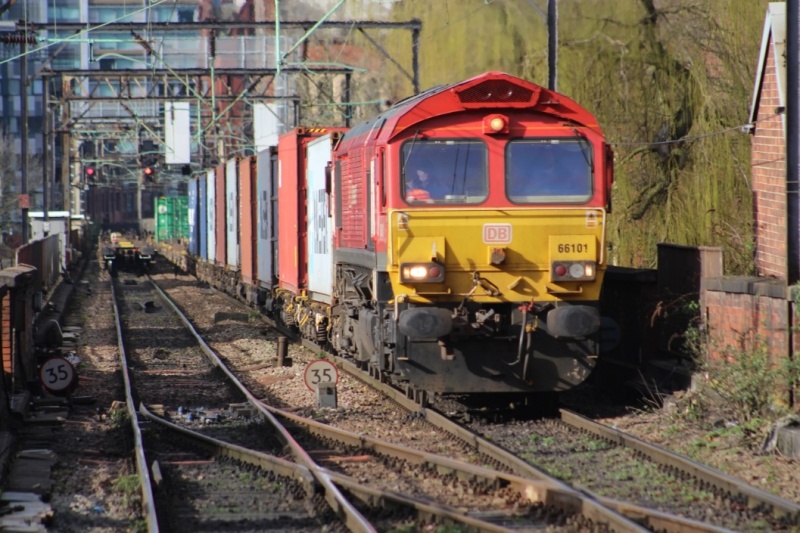 The Castlefield Corridor – a great opportunity for freight, and a way to enable reliable passenger services across Manchester. A Trafford Park to Southampton Western Docks freight train approaches Platform 13 at Manchester Piccadilly. To the left is the rear of a train to Trafford Park from London Gateway. Without these two trains, four more passenger trains could cross Manchester every hour.

Since the opening of the Ordsall Chord, too many passenger services have been scheduled via the Castlefield corridor through Manchester’s Oxford Road and Piccadilly stations. The result has been the overcrowded services and delays in both morning and evening peaks described in Railwatch 163 ‘Pinchpoint in Manchester’.

Railfuture, through its Freight Group and Infrastructure and Networks Group, have come up with a response to the challenge of the Castlefield Corridor with a particular focus on freight movements.

Due to their length, freight trains take up twice the line capacity of passenger trains. For reliable operation, a line should only operate at 85% capacity. At Castlefield it is pressed to 93% with delays and cancellations a regular occurrence.

Freight currently has no choice but to use this route every hour and cannot deploy some of the tricks passenger services use to recover from late running. It cannot turn back short of its final destination and ask its cargo to catch the next train or leave out stops to recover time if it’s journey is delayed. But, as freight doesn’t complain on social media when it is late or cancelled, it is a popular target for politicians looking for a solution.

Before advancing a potential solution, we had to consider how we want freight to develop in future. As batteries can never match the energy density of road fuel and therefore not suitable for long distance road haulage and demand for freight movement by rail will far exceed that of today, almost certainly outgrowing capacity at Trafford Park.

Is it now time to look for another site? If so, where?

In drawing up a possible solution we have been guided by the following assumptions:
Carrington Business Park lies to the south west of Manchester and although mostly vacant, has good access to the local road network and plenty of room to accommodate 775m freight trains. It was once the Shell chemical works which enjoyed rail access via the former line between Stockport and the Warrington Central (CLC) line at Glazebrook.

Reinstatement of the line to Skelton Junction is straightforward with no blocking development. Although this line has no west-to-south connection with the West Coast main line we demonstrate how this can be created by a new Adswood curve over a former landfill site at Cheadle Hulme. The junction here can be formed such that the majority of trains are fed onto the Stoke line. With no more than five passenger trains per hour on this section it is far cry from the situation at Castlefield. From there, trains can access any of the main lines towards the southern ports at Felixstowe, Southampton and London Gateway.

At Carrington we propose the freight terminal follows the north/south alignment of the former works siding to Carrington Power station. By extending this line for less than a mile northwards to form a south-to-east junction with the CLC line to the west of Flixton, we provide the western access to Trafford Park terminal.

The benefits of this package of interventions are:
Castlefield – a great opportunity for freight? – view or download the full report.