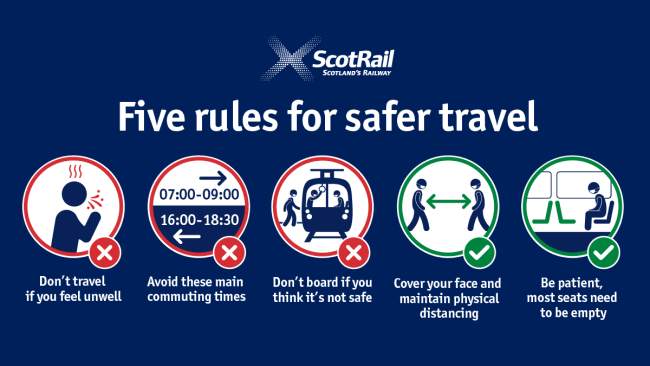 "Let the train take the strain,” exhorted British Rail’s famous slogan in the 1970s. Railfuture honorary president Christian Wolmar is worried that more than forty years later we are being urged to do the opposite.

He warns that the railway operators and the Government are united in trying to persuade people not to use the railways, suggesting “only travel by train if you have no other alternative”.

"This campaign has been successful in cutting usage which, even after a slight recovery, stood at around 10 per cent of former levels by mid-June. But its success is now causing consternation within the industry.

The concern is that the campaign to deter people temporarily from using trains will cause a permanent slump in passenger numbers and a crisis for the railways.

To keep the railways running, the Government has been paying around an extra £700 million a month in addition to the annual rail investment subsidy of approximately £4.5b billion. Without this additional support, the railway system would have collapsed.

With the rail companies effectively under state control, the industry has been left without a powerful voice to defend its interests.

In Europe, the approach has been far more measured and the railways are trying to return to normal. In France, restrictions on passenger numbers were abandoned in mid-June, opening up trains to 100 per cent occupancy.

In Austria, one of the earliest countries to impose a national lockdown and close its borders, there is no attempt to enforce social distancing on public transport. Instead the Austrian government has said that passengers use the system at their own risk, with face masks mandatory.

Even when the rules are relaxed in the UK, the railways still face an uphill task to return to their past glory; and there is no question of reviving the old franchise model of the private sector taking all the financial risk of the fare box.

By next year, the railway may have only 50% of its pre-Covid passenger numbers.

The biggest irony of the injunction not to use trains is that it will reverse the improvements to air quality made during the lockdown. So much for a green recovery from Covid.

Congestion on the roads was already worsening before most shops, businesses and schools had reopened. As the lockdown is eased, there are fears that traffic levels may be higher than before the pandemic as people are too scared to use the railways.

There has been talk of a greater emphasis on cycling, walking and public transport, but £27 billion was earmarked for new roads in the March Budget.

A year or two of empty trains will, no doubt, lead to questions from the Tory benches about the billions being spent on the industry, and suggestions that perhaps Richard Beeching did not go far enough."