The counties of Cornwall (a unitary authority) and Devon, including the unitary authorities of Plymouth City and Torbay, as well as the Districts of Exeter, East Devon, Mid-Devon, North Devon, West Devon, South Hams, Teignbridge, and Torridge.

Click here for Railfuture and other regional and national events, including conferences and key campaign dates.


On 19 March 2021 the government announced that regular services from Exeter to Okehampton will be restored in 2021, as the first reopening to be completed by the Restoring Your Railway initiative - more about the Dartmoor Line

Regular passenger services will return to the Okehampton to Exeter railway from Saturday 20th November. This is a month earlier than planned. Mark Hopwood, GWR Managing Director, said:

"Working with our partners at Network Rail and in the community we have long campaigned for the re-opening of this important local line, and we are really looking forward to being able to start running passenger trains again. With the start of services now just over a month away, this announcement is great news for communities surrounding Okehampton who will once again be connected to the national network. We've been working hard with Network Rail and local partners, including Devon County Council, to help prepare the line and the station at Okehampton for reopening on 20 November and this work will continue after 20 November as we develop the station facilities. The project to re-open the line is already helping to bring social and economic benefits to the local area, reinforces the positive impact the railway can have on the communities we serve."

Network Rail has laid 11 miles of new track and, repaired 21 structures along the route including 4 bridges and undertaken vegetation and drainage works. Further work will be carried out over the winter including work on the Okehampton station buildings to enable the restoration of the café and other facilities. Journey time between Okehampton and Exeter St. Davids will be approximately 40 minutes. Some trains will run to and from Exeter Central and a few will call at Newton St. Cyres by request. The bus service (118) to Tavistock is being amended to connect with trains at Okehampton.

Over 50 Years of Rail Closure - Exeter to Plymouth via Okehampton


All is quiet on Sunday 6th May 2018 at Brentor, 53 years since closure of Devon’s second main line railway between Exeter and Plymouth. 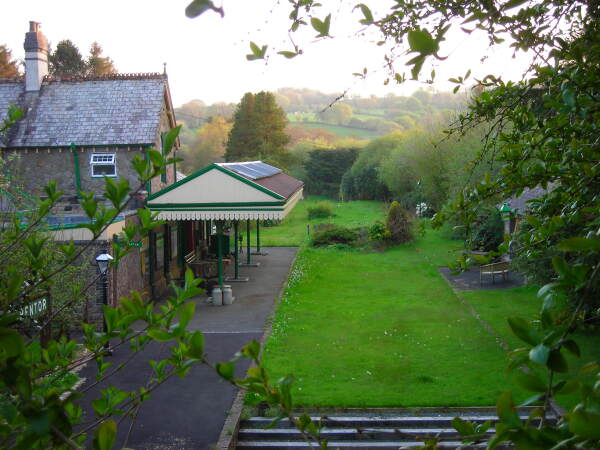 Photo shows the closed Brentor station between Okehampton and Tavistock, View south towards Bere Alston and Plymouth on 6th May 2018. The reopened railway could be restored without running through the original station here, by using the former trackbed of the parallel Great Western line (Launceston to Plymouth) closed 31st December 1962.

The last passenger trains ran on Sunday 5th May 1968. Then just 9 months later the Dawlish route was blocked by snow and the closed Okehampton route, still with track in place, was more easily cleared for a freight service to run.

Since then the need for the Okehampton route has been demonstrated time and time again and most spectacularly during the 2 month 2014 closure of the Dawlish route. This was the result of the sea wall collapse there. Almost without fail the Okehampton route is needed several times a year for diverting trains. Most often this is when the Dawlish route is closed by high tides or by weekend work on the track. Passengers can be directed to bus replacement services, but the Penzance to London Paddington sleeper service cannot run and too few or too many trains can be trapped west of the blocked route.

Every weekday the line is needed for commuters to travel into both Exeter and Plymouth from Okehampton and Tavistock. Also to connect for other train services. Reopening the full Okehampton route would allow more long distance trains to be run from Plymouth to London and the North, but without using up all the track capacity needed to improve local train services on the Dawlish route. 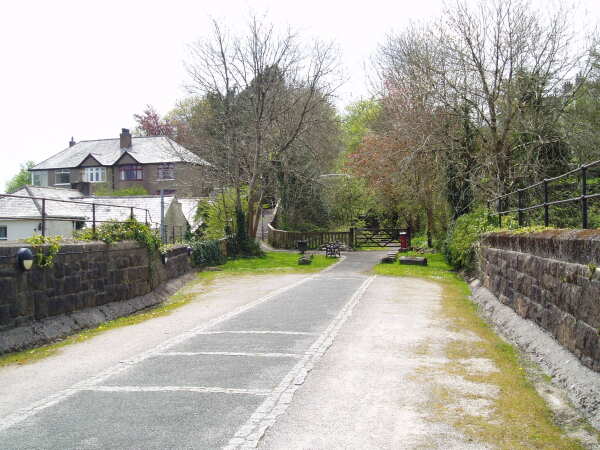 Photo shows the south end of the Bannawell Street Viaduct in Tavistock. View south towards Bere Alston and Plymouth on 7th May 2016.

All it needs is 21 miles of restored track between Meldon near Okehampton and Bere Alston. The rest of the route remains in use as part of the Gunnislake and Barnstaple branches. The railway from Exeter to Okehampton remains in-situ and is used for occasional special services and on summer Sundays.

More on reopening the Okehampton line.

An article on 50 years of the closure by Bernard Mills appeared in the Plymouth Herald in April 2019.

Railfuture is campaigning for a programme of incremental improvements to the route between Salisbury and Exeter to increase service frequency and its capacity as a diversionary alternative to the Great Western route. See details of our proposal at Salisbury to Exeter Route Capacity Enhancements. Within Devon we advocate a new passing loop at Whimple. For further information on this see our November 2017 Newsletter.

The Honiton diversionary route was needed when the Exeter to Taunton railway was closed for 3 days at Cowley Bridge Junction, from Tuesday 12th June 2018, for the installation of 24 hollow concrete rectangular culvert structures.

The Honiton line will be needed again from 18 February to 8 March 2019 when the railway is closed between Taunton and Tiverton Parkway for maintenance work at Whiteball Tunnel. Only a 2 hourly diversionary service can currently be added to the normal hourly Exeter to London Waterloo service.

During the late evening of Tuesday 4th February 2014 a storm surge breached the sea wall carrying the railway at Dawlish. Eighty metres of track were left hanging, the adjacent road cut and several houses undermined. 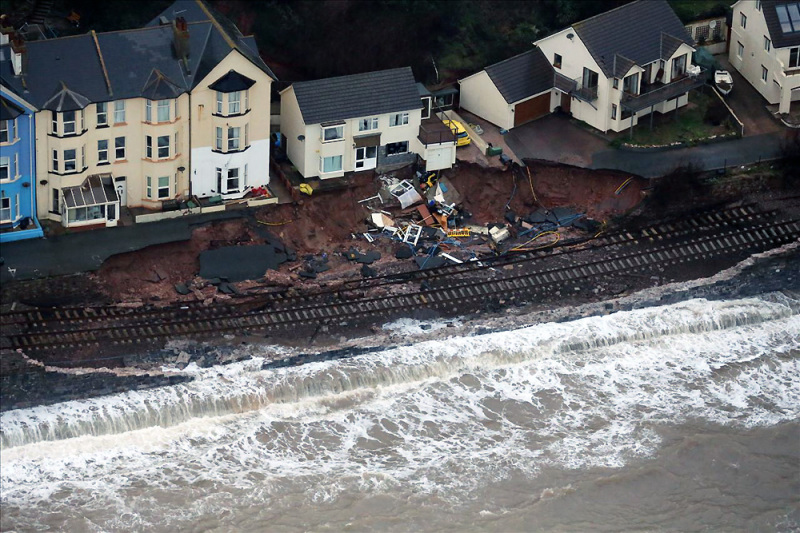 On 8th February 2014 both lines to Taunton from the east were closed by flooding whilst Whiteball Tunnel was already closed for maintenance, and the South-Western line to Exeter was closed by a landslip at Crewkerne, leaving Exeter and Taunton totally isolated. This had the effect of cutting off Cornwall and half of Devon from the rest of the UK railway network. The lines to Exeter have since reopened, and the line at Dawlish was repaired and re-opened on 4th April 2014.

However the economy of the South-West cannot afford to be cutoff for long periods of time again in future. In November 2012 Railfuture published this report: Railway Flooding in Devon: Observations & Recommendations. These recommendations have yet to be actioned. At our Taunton conference in June 2013, the speaker John Dora of John Dora Consulting, a former Network Rail engineer, warned about environmental problems and referred particularly to the sea wall.

Railfuture are campaigning for a resilient rail network in the south west which will also support economic growth. Click Dawlish to find out more about our campaign for an additional route and faster journey times, and register your support.

New stations recently opened at Newcourt and Cranbrook, with another approved at Marsh Barton on the Riviera line between Exeter and Starcross. These are a key element of the Devon Metro concept, part of Devon County Council's public transport strategy, funded by the previous government's New Stations Fund.
Railfuture supports the campaign for further new stations at Edginswell on the Riviera line between Newton Abbott and Torquay/Paignton, at Cullompton between Exeter and Tiverton Parkway, and at Wellington between Tiverton Parkway and Taunton.

Other station reopenings on existing lines and suggested by Railfuture Devon and Cornwall include, Pool between Camborne and Redruth, Plympton between Plymouth and Ivybridge and Kingskerswell between Torre and Newton Abbot.

In addition to the reopening of the Exeter to Plymouth via Okehampton line, Railfuture Devon and Cornwall advocates trackbed protection of a number of other closed lines where there is potential for future reopening. These include:


We are supportive of local groups wishing to restore rail services to Wadebridge, Bude and Ashburton, but in the meantime seek improved bus/rail connections.

Rail journeys between Devon and Dorset can take many more hours than those by road. Our priority is improved connections from Exeter to Dorchester and Weymouth, both via Castle Cary and the Yeovil Junction to Yeovil Pen Mill link.

Our branch AGM in Plymouth scheduled for Saturday 4th April 2020 is postponed until a later date. Please check here for updates.

Saturday 16th March 2019
Saturday 28th April 2018
Both were held at the Unitarian Church, Plymouth.
No change of branch officers or committee at either.

Our Autumn 2017 meeting was once again at the Boniface Centre in Crediton on Saturday 25th November. We invited speakers to talk about progress on restoring passenger services to the Okehampton to Exeter line, as well as ideas for Light Rail between Barnstaple and Braunton. A short report of this meeting appears in the April 2018 Newsletter.

Over 50 delegates joined Railfuture’s ‘Via Crediton’ rail meeting at the Boniface Centre in Crediton on Saturday 28th November 2015. Restoration of a full daily train service to Okehampton was the key theme. See Dartmoor Rover for the launch on Sunday 15 May 2016. Railfuture Devon and Cornwall branch chairman Gerard Duddridge said that the special summer Sunday Okehampton to Exeter trains take around 42 minutes to St. Davids station, but this would drop to 24 minutes if the track was upgraded to become the second Plymouth to Exeter main line avoiding Dawlish.

New road access for buses and cars from the A30 near Okehampton station would benefit large areas of West Devon and North Cornwall and reduce traffic through the town centre. In the longer term a park and ride station might be built at Sourton or Okehampton Exeter Road.

Dr. Michael Ireland, Chair of Destination Okehampton and Okehampton Town Councillor, explained that they undertook research on the reopening proposal and were the lead local council on the railway project. They worked with others such as the Peninsula Rail Group & Peninsula Rail Task Force. They met with Claire Perry MP (then Under Secretary of State, Dept. of Transport) on 7th August 2014 who said, ‘that the country was on the edge of a rail renaissance and that the South West had been short-changed by both road and rail network services over a number of years’.

John Burch, Vice Chairman of the Tarka Rail Association, outlined the success of the adjacent Barnstaple line which shares the same route through Crediton. The number of users has more than tripled since 2001 to 615,000 in 2014. Capacity to run more trains is needed, plus line-speed improvements and resilience to track damage from bad weather and flooding. Open level crossings such as Salmon Pool near Crediton remain an issue and need to be replaced with automatic barriers.

Chris Austin from Railfuture’s Infrastructure & Networks Group looked at the success of the recent Borders Railway reopening in Scotland, and to Ebbw Vale in Wales. Since the Okehampton line closed in 1972 rail demand has grown across the rail network and would also have done so from Okehampton. Road congestion as in Exeter and parking constraints at railhead stations encourage this growth. The railway provides greater journey time reliability, and internet access to travel information encourages younger age users.

Establishing a daily service to Okehampton, with approval of the Department for Transport, requires a business case to be demonstrated and a sponsor to lead the reopening process. Funding would be needed and might come from the Local Enterprise Partnership, Devon County Council, West Devon Borough Council, from Network Rail or the train operating company such as Great Western Railway. (See Royal Oke for the Okehampton-London train on 18 March 2017.)

The meeting closed with questions and a strong consensus that the reopening needs to happen.

These are produced once or occasionally twice a year.
View our most recent branch newsletter.
See all Railfuture Devon and Cormwall newsletters here.

Rail user groups in Devon and Cornwall are shown on Railfuture's Regional List of Rail User Groups. The Regional List can be downloaded in PDF format here.